« My new AI chairs | Main | Getting started with Forge »

The situation in Switzerland regarding the pandemic is looking bleak, at the moment (and no, yodelling isn’t helping). The number of cases per-capita is currently ahead of the US, and the critical infrastructure in my home canton is starting to get overwhelmed, hence us being put on “red alert”. I’m expecting our kids to be sent home any day now, but we’ll see what the authorities decide. Anyway, this has definitely been at the forefront of my thinking, of late, when it comes to what we’ll end up doing to keep busy during the upcoming confinement.

People who follow me on Twitter may have seen that a few weeks ago I invested in a “new” computer. On the main Swiss auction site (or at least the one I use from time to time) I stumbled across a “retro bundle” which comprised of a Commodore 64c computer along with various peripherals and a whole load of floppy disks.

Here are the photos from the auction posting: 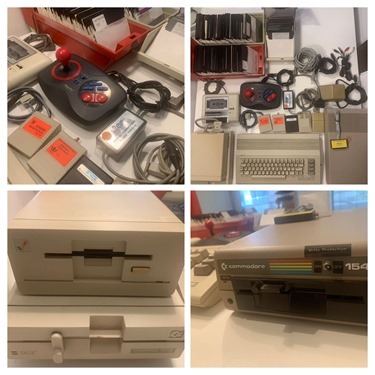 Now the auction posting stated that while the computer itself was functional, the seller hadn’t been able to test whether the rest was in working order. I figured this was code for “only the computer actually works”, but decided to bid on it anyway. I ended up winning for the modest sum of 300 CHF including postage (around $300 USD).

This is – perhaps surprisingly, to some – my first Commodore 64. Growing up – as you can read in this post – my family had a sequence of TRS-80 Model III and IV machines, as well as a ZX Spectrum+, but I had friends who owned C64 systems.: the Speccie was the best-seller in the UK, with the C64 in second place. I already have an old Spectrum that a friend from Italy donated to the cause, some years ago, which I somehow managed to get working and even load old games from an iPod. I also backed this recent Kickstarter campaign, so I’ll be getting my ZX Spectrum Next sometime in 2021, too. Anyway, the point was that I didn’t really want another Spectrum – and as they didn’t exist on the Swiss market, I probably couldn’t get one here if I did – so I was very happy to get a C64.

When I received the retro bundle I was excited to find the computer working well, and was even able to run the classic arcade game Wizard of Wor from cartridge.

The bundle came with three different floppy drives: two standard C64 drives – the 1541 and the 1541-II – as well as one for an Amiga. It also came with a Quickshot joystick, a sound digitizer pack, a Datasette (the C64 cassette player) and a bunch of mice.

Excitedly I started trying to load data from disks using the standard (humungous) 1541 drive. Nothing would load, but the fact that the bundle also included a 1541-II gave me some hope that there was a problem with the 1541 and so the owner went ahead and bought a newer drive: they might also have just wanted two drives, of course, as it certainly makes copying disks a lot easier.

One big difference between the 1541 and the 1541-II disk drives is with the power supply: the older drive has an internal PSU that is apparently prone to overheating and frying delicate circuitry. Which is one possible reason for the 1541 not seeming to read anything (I followed this extensive troubleshooting guide, but without success). It could also be something much more simple, because the drive is recognised by the system and gets as far as trying to read the disk before stalling and blinking a red LED:

Onto the 1541-II… which I found didn’t have its external PSU provided as part of the bundle. This probably explains why the seller wasn’t able to load disks (and gives me serious hope that I’ll be able to, although I’m trying hard not to get too excited). I went online and ended up buying this dual PSU that will hopefully run both the C64c and the 1541-II. At least that’s my sincere hope.

Assuming it does – and I can get the 1541-II to read them – I’ll have around 250 floppy disks to work through and enjoy, which should indeed provide something to do during the long cold winter months. I could clearly work through these on my own – geeking out on your own with an 8-bit computer was what made the 80s and early 90s survivable, for many of us – but this somehow feels selfish: this treasure trove of disks really deserves to be shared in some way. So that’s what I’m going to do.

I should be receiving the new PSU sometime this week, and – assuming it works – I thought it might make for a fun series of blog (or vlog) posts. The concept I’m working around is “Floppy Friday”: once a week I’ll try to load a random disk (or perhaps two) and publish the results via YouTube and this blog. You have to bear in mind that I was never a C64 user, so I’ll be stumbling my way through this, week after week. Which in itself might be vaguely entertaining – we’ll see.

I haven’t quite decided on the format, yet: for sure there will be video, but I’m wondering if it makes sense to try this live, perhaps using a streaming platform of some kind. I doubt I could use something like Twitch without using a C64 emulator (which would totally defeat the object, of course), but then again I don’t know what I don’t know. I’ll ask my kids.

So what do you think – does this sound like fun? Is anyone actually interested in watching me fumble my way through loading ancient software on a computer I’ve never owned every Friday for several months to come?