My friend Sol posted a few weeks ago about the latest release of Dynamo – currently available in Sandbox form – which has a number of compelling enhancements.

First-up is a migration tool – developed by the talented team at Matterlab – which will take your code from IronPython 2 to CPython 3. This is something I’d tried manually a couple of months ago, and frankly I’m delighted there’s now a tool available. 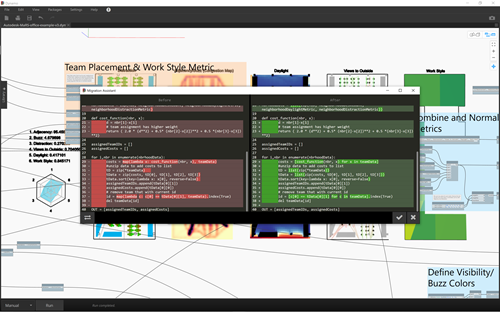 The tool is really slick! It found issues (mainly related to whitespace, admittedly) in my already translated code, and also made short work of translating a few nodes I’d missed, last time around. I will say that I’m missing a “batch mode” – or at least a mode that allows you to work through a list of nodes to change, much as Warnamo does with warnings/errors – but that shouldn’t be hard to write, if it hasn’t already been created and I’ve somehow missed it.

It’s great to see that print() has been enabled inside Python code – sending the results to the Dynamo console – and I’m sure it won’t be long before I end up needing everyone’s favourite (or should that be least favourite?) debugging mechanism.

Another “yeehaw” moment with the 2.8 release is around graphics performance. This baby flies!

This animation was captured in a Parallels VM: an impressive improvement.

Interestingly the graphics preview performance seems significantly better when you’re zoomed way into the node view (presumably both need to be rendered, so perhaps having fewer nodes to draw on-screen brings some performance benefits). It also seems that graphics display is crisper in this release, which presumably comes from the upgrade of Helix in 2.7 (and an anti-aliasing bugfix in 2.8).

I’m really excited by Dynamo’s trajectory, these days. The MaRS graph has always been a bit of a beast – as anyone who has either worked on it or checked it out will attest – but I can safely say it’s finally easy to navigate and work with inside Dynamo. Let’s see where it goes from here!