An update on our post-COVID office layout explorations

For the last few weeks I’ve once again been heads-down on Generative Design-related tasks after several months working almost exclusively on Dasher. I like switching context like this but it can certainly be a little disorientating, at first. Anyway, it’s been really interesting working once again with my friends in the AEC Industry Futures team (the rockstars formerly known as The Living), and with Rhys Goldstein – the designer of the algorithms driving the Space Analysis package – on imagining a tool to help with post-COVID office layouts. Something I speculated about a little while ago, although that was before this project kicked off formerly.

As I mentioned before, a great deal of the thinking around this was inspired by Project Discover (and technologically supported by the Dynamo graph and Space Analysis package we created as part of Project Rediscover). This time, however, we decided not to focus on a workflow that involves redesigning floor layouts extensively: for now we’ve been exploring a more lightweight approach that will reduce occupancy by deactivating a subset of a floor’s desks, and then analyse whether the desk configuration meets requirements for social distancing and the degree of expected congestion for circulation routes. This isn’t just about managing the risk of transmission from having people close-by, but also about the impact on psychological comfort, something that’s likely to be of significant importance as we return to the office after several months at home.

The tool is inside Dynamo – once again making heavy use of the Space Analysis package – and is intended to be optimised via the Generative Design feature of Revit 2021 (the former Project Refinery), of course. Rhys has created three metrics we’re currently using to assess the various designs generated.

The first relates to desk proximity. If desks are close to each other – within a configurable distance that isn’t separated by a wall or partition – they create “hotspots”. 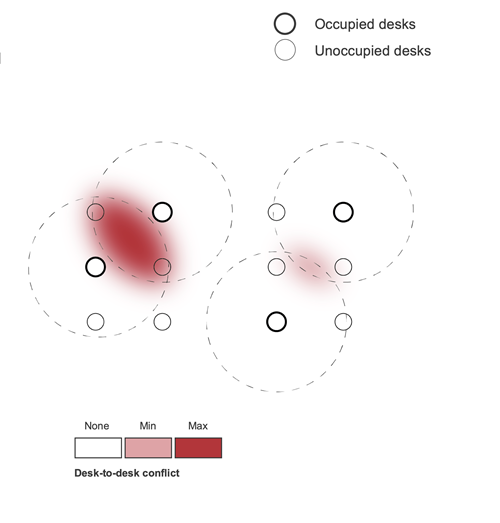 The second relates to possible congestion in passageways through the office, much in the same way we measured “buzz” in Project [Re]Discover. 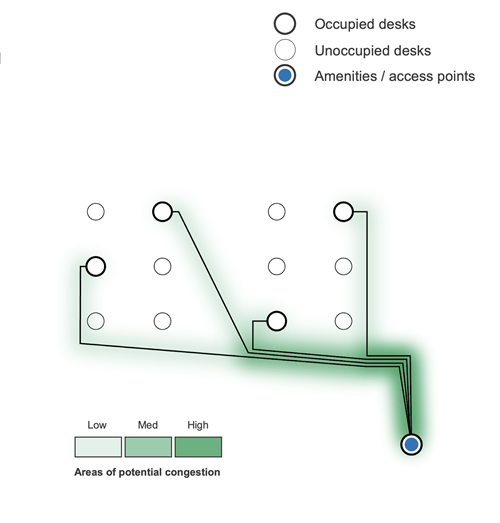 Both of these contribute to a third metric we’re calling exposure: this will tell us which desks (and hotspots) are further at risk due to their proximity to congested pathways. 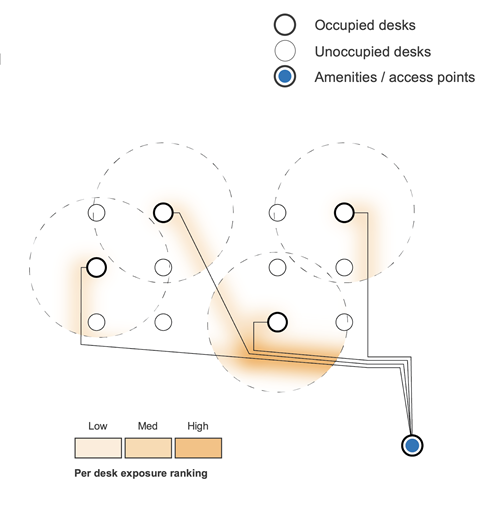 You may be wondering how or whether these metrics have been validated in some way by public health professionals. The short answer is “not yet”, but this is absolutely something we’re working towards (more on that later on).

The logic behind adopting a lightweight approach is that many companies aren’t going to want to start from scratch when implementing their return-to-workplace strategy, and we’re speculating that desk deactivation is a likely first step (in addition to other measures, no doubt).

We have other projects ongoing that will hopefully inform the evaluation of desk layouts, such as CFD analyses of HVAC systems and human sneezing (the latter of which is both very interesting and very icky). We’re expecting that learnings from these will influence our design evaluation metrics.

Here are a few animations created using our current approach for different floorplans. Don’t worry about the absolute values of the metrics: the only one that has any direct meaning is occupancy, the others have different upper ranges, depending on the specific floorplan’s layout. Like many GD-centric metrics, their value is in helping us compare design variants for the same model, as a relative measure rather than something that’s physically callibrated.

The frames in each animation are sorted by occupancy: you can see how as occupancy increases, each of the other metrics increases, too (as we want to minimise desk proximity, congestion and exposure, these are represented inversely in the radar chart).

This is just the beginning, of course. We’re hoping to not only validate some of our current speculation, but to steer it forwards based on first-hand feedback from people who have knowledge of or experience with forming or implementing a return-to-workplace strategy, such as facilities managers or public health professionals. We’ll be engaging with professionals we believe can help us with this, but if you happen to be someone (or know someone) who has this kind of knowledge, please do get in touch. We’d love to hear from you.

In the meantime, please do watch this space. Some people have already reached out with an offer to collaborate – based on my previous post – and we haven’t forgotten you, I promise! We had a near-term deadline to meet before we could open up meaningful external discussions, but we’re now getting to the point where we’d like to engage more externally.