« Celebrating at a distance | Main | Automating operations inside Dasher »

Come and try the latest Dasher – now with a new timeline!

After many months of effort, we now have an updated version of Project Dasher available on dasher360.com. (The project is still very much active research, so for now you’re able to try it out with the model of the NEST building, accessible via the Demo button on the main page.)

The major feature of this update is the new timeline, which was designed by Autodesk Research and developed by our partner CCTech. This component has been under development for over a year, so it’s really exciting to finally get it into people’s hands. Beyond that, you should really give the new visual themes a try: it’s really interesting to see Dasher in dark blue or light gray mode.

Here’s a breakdown of the major changes in this update:

As it’s nearly Easter, you’ll find a fun “Easter Egg” (Dasher’s first!) to allow you to change the theme without using the settings. If you double-click on the “Welcome to Project Dasher” text on the main site, it’ll cycle through the various visual themes. Give it a try now! 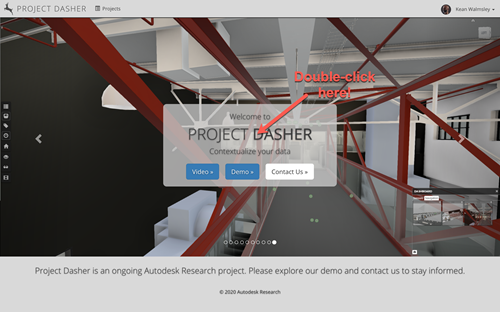 We’d love to get your feedback on the changes – especially regarding the new timeline. We’re not completely done with it – despite it being fairly complete, functionally speaking – so it’s a good time for us to get usability feedback. If you give it a try, please do let us know what you think.