Bright and early, yesterday morning, I hopped on a train (well, a couple of trains) to get across to Basel for this year’s Swissbau, the bienniel construction-related trade show held in Switzerland, and apparently one of the largest in Europe. 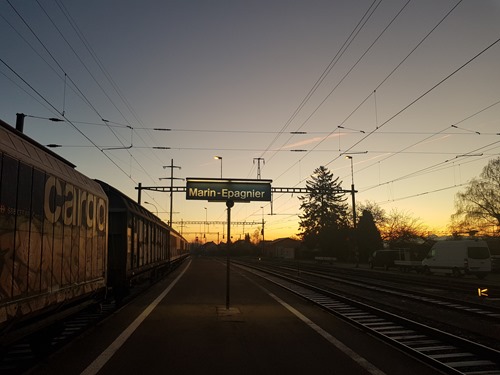 I’d never been before, but thanks to social media I’d compiled a list of people to see there, and had even coordinated to meet up with my friend and fellow blogger, Jeremy Tammik. 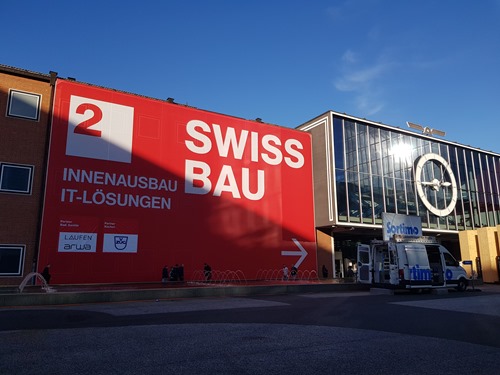 There was quite a bit going on at Swissbau, even outside the exhibition  hall. At one point I saw some people performing while suspended from a building. And no, that’s not how people typically clean windows in Switzerland. ;-) 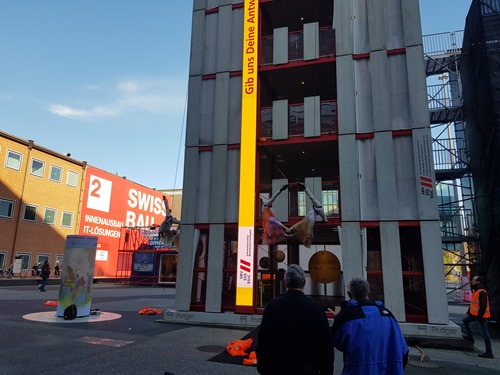 The centre itself has a very cool feature: a hole that looks like it’s been lined with huge fish-like scales… 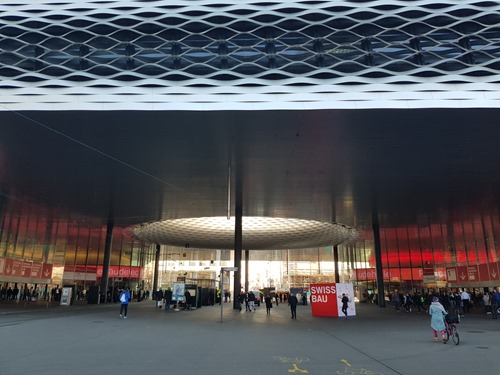 … and extends all the way through the building. 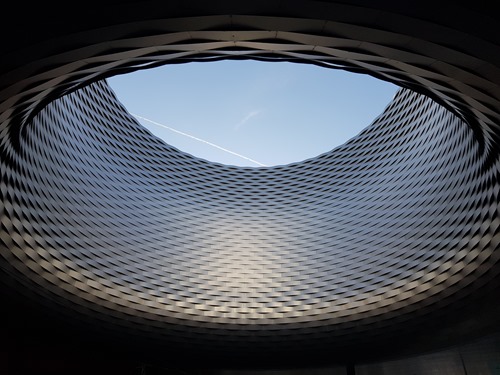 Inside, the Swissbau event is huge, with upwards of 900 exhibitors. 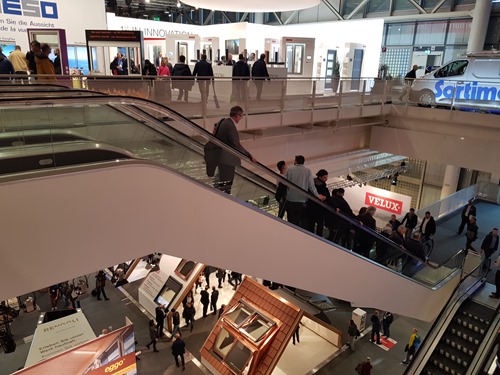 There were a lot of more traditional construction-centric vendors, showing off new building materials and ceramics. 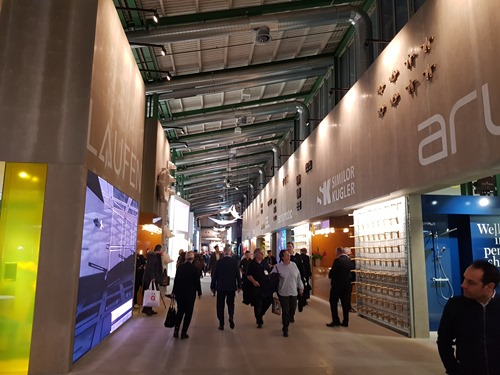 Of particular interest to me, at least, were the advances (aesthetically, anyway) in solar panels. 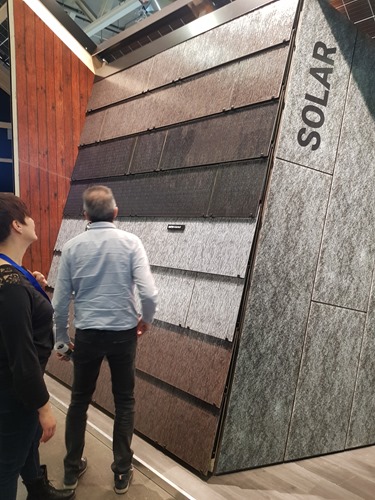 And we were in Switzerland, so a little chalet-chic was on display, too. 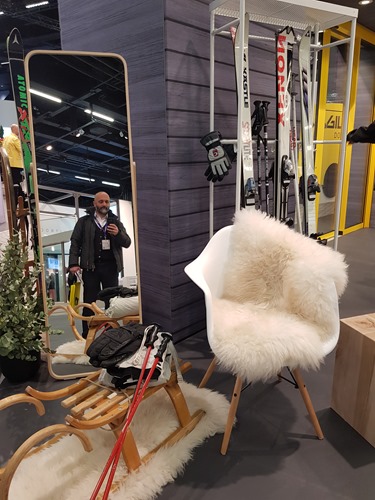 Autodesk had a stand with other software vendors up in Hall 2.2. 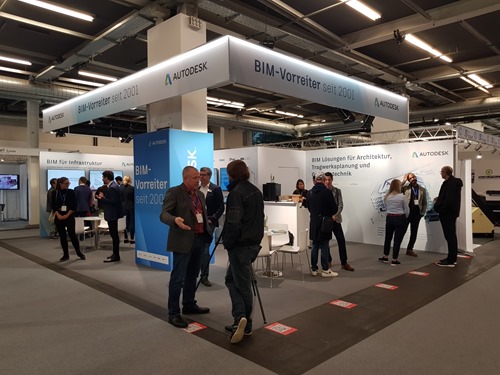 It was a good opportunity to meet up with colleagues from Switzerland and Germany. 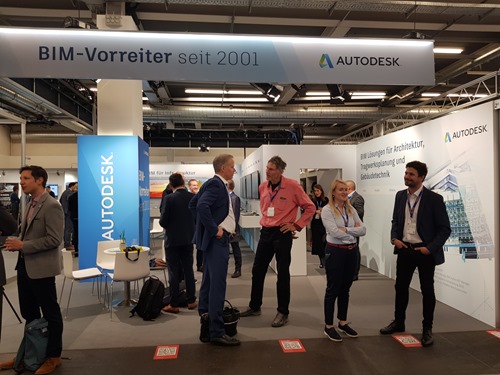 I even had the good fortune to see Martin von Wartburg, who had retired from Autodesk a few years ago but was also passing by to say Hi to people. 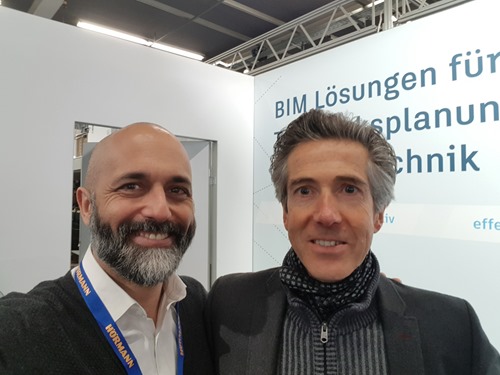 Across from the Autodesk stand was Mensch und Maschine’s (Man and Machine to us anglophones).

Marcel Ludwig from MuM had invited me to the event, so it was nice to see him on the stand. 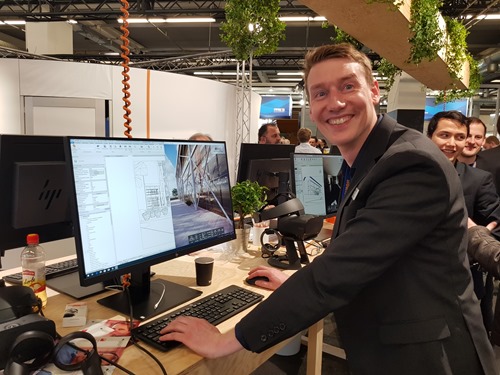 Matthias Wasem from BIM Facility was also there, and proved to me he had Dasher 360 running with the NEST model. :-) 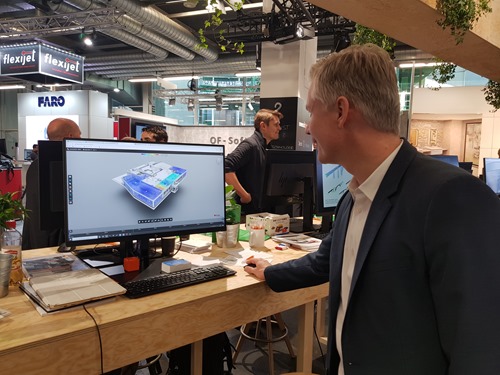 Downstairs in Hall 1.0 there was another interesting area. 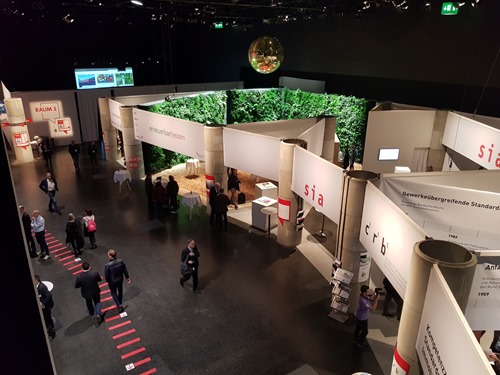 There were some industry talks an d panel discussions taking place. 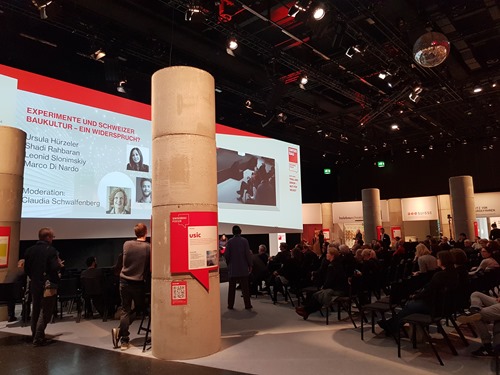 And there was an interesting bar area that had a green theme (albeit via plastic plants). 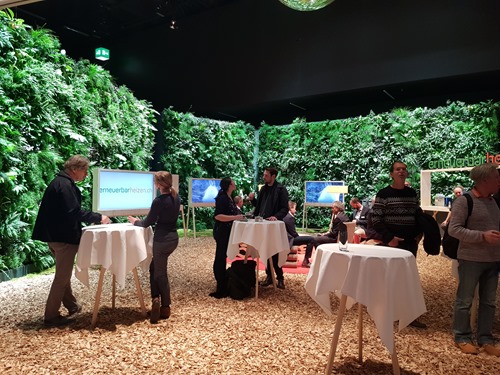 The team from NEST had a stand there, too. I was happy to get the chance to catch up with Reto Largo and meet collaborators from his team. 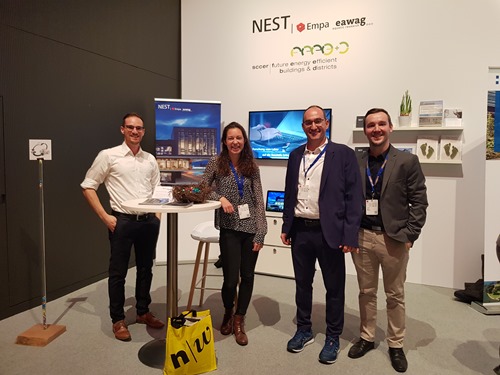 Jeremy and I went around a number of stands in the Innovation Lab, upstairs in Hall 1.1. I’d had a discussion about digital twins a few months ago with Dr. Wissam Wahbeh from FHNW. 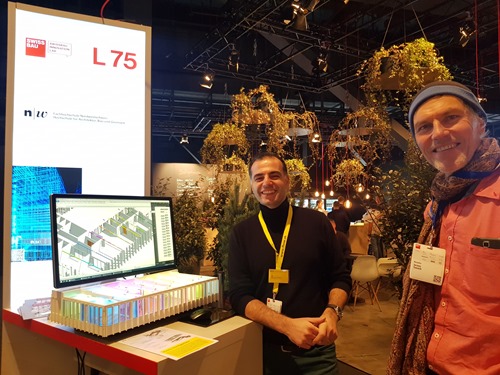 I was really impressed to see that since then his team had created a really interesting 3D-printed physical mockup of a digital twin connected to IoT sensors. They’d even integrated an LCD screen into the floor to display simulated shadows. 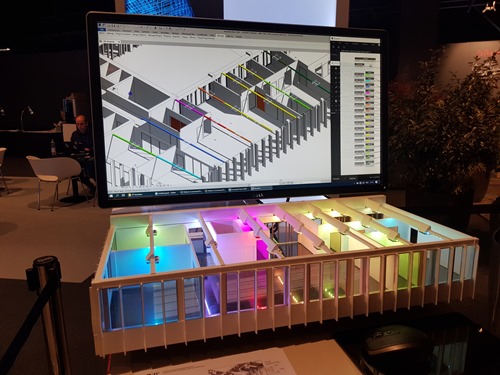 Digital twins were everywhere. We stopped by – this time with Claus Mueller – a stand being manned by former Autodesk colleague Matthias Liechti. 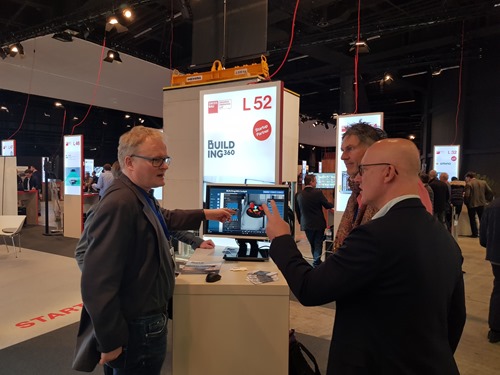 Matthias’s startup has been working on some digital twin concepts using Forge. 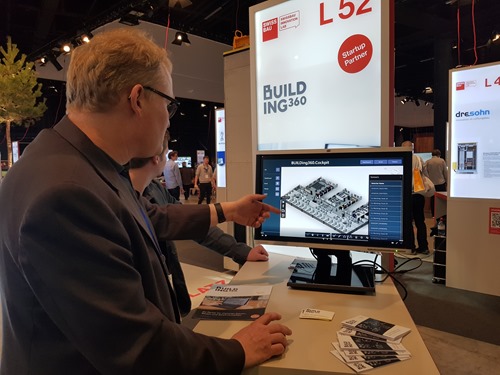 We met with Markus Giera and André van der Westhuize from Kaulquappe, who spoke very positively about the business they have built around Forge. 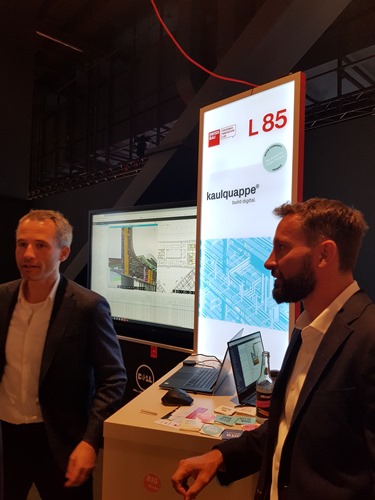 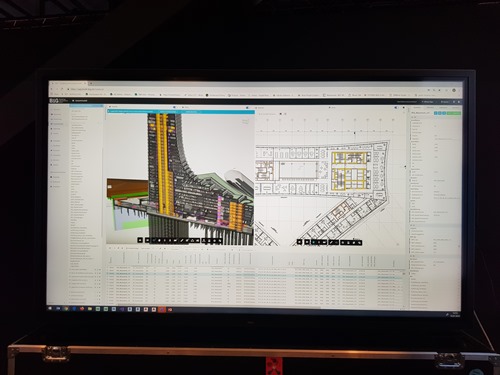 Nearby was the Mobbot stand. I’d met Agnes from Mobbot at Rob|Arch 2018, and it was nice to reconnect. They’re 3D printing concrete – via a spraying system – for infrastructure projects. 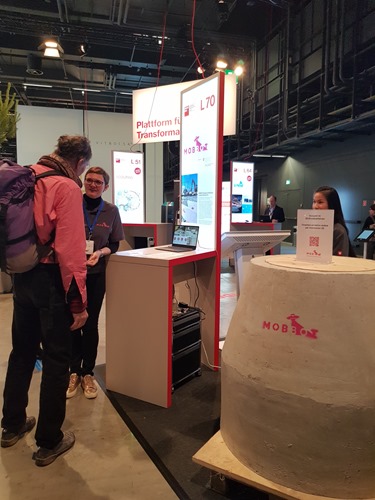 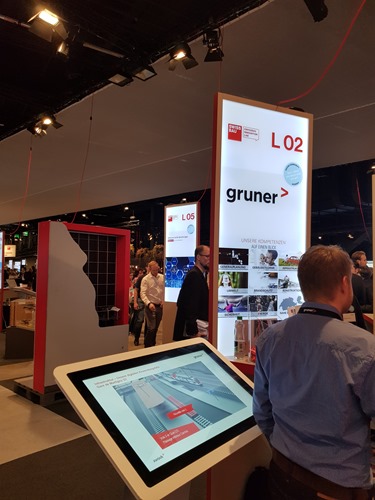 … as well as Davis Kantor from CRB. 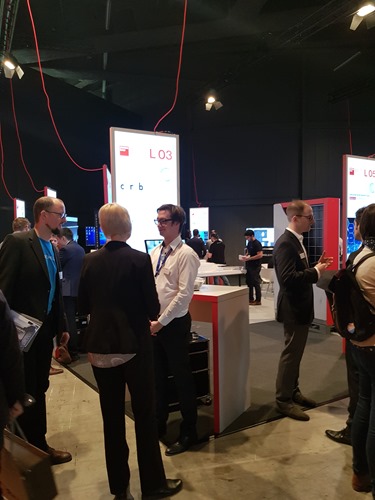 Away from the Innovation Lab, I had the chance to see some work being done by André Corpataux from Securiton, who is once again using Forge to create digital twins, this time for display of information relating to physical security. 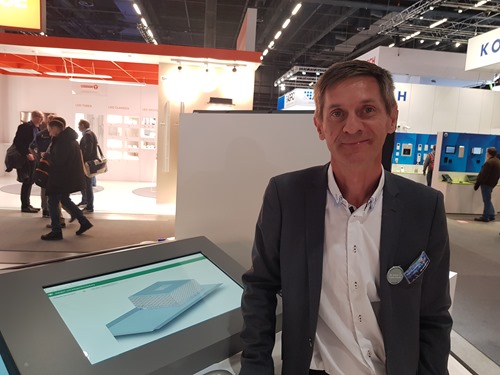 Despite all this cool digital innovation, it was still reassuring to see the physical world very much present at the event. 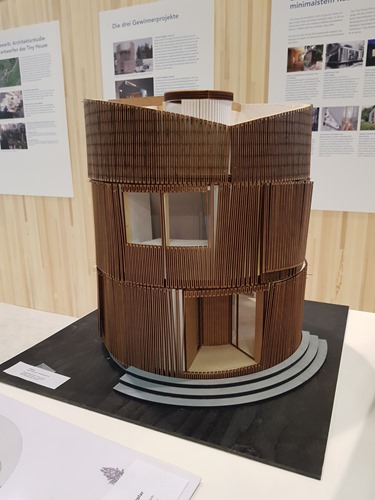 People do still love to see scale models, after all. 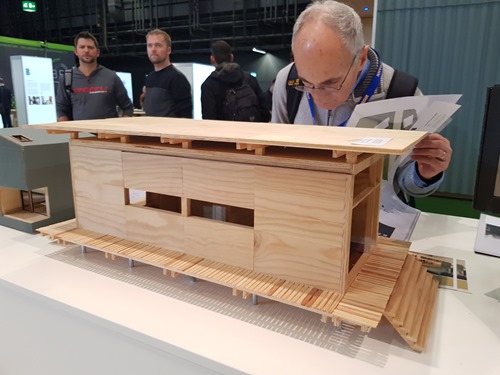 I was very happy with my whirlwind tour of Swissbau 2020: it was a really eye-opening experience, and a great opportunity to [re]connect with people in the industry in Switzerland. It’s definitely an event I’ll be making a point of visiting in future.