« An updated model of the NEST building, now live on Dasher 360 | Main | Wrapping up Autodesk University 2019 »

On Saturday I headed over to Las Vegas for Autodesk University 2019. The journey started with the train to Geneva. 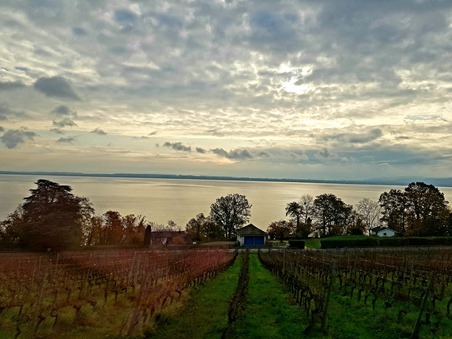 From there it was a short flight to London, which amazingly arrived 30 minutes ahead of schedule. 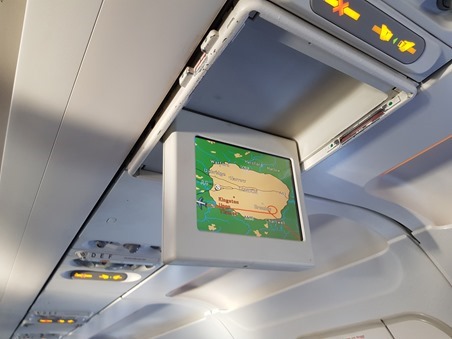 I had a 3-hour connection at Heathrow, so my old friend Simon picked me up from T5 and we had a nice pub lunch at The Ostrich Inn in Colnbrook before he dropped me at T3. And people say that Heathrow airport transfers aren’t enjoyable!

It was a really strange onward flight to Las Vegas. I’m so used to this flight being full of Autodeskers and AU attendees… I’m sure there were AUers on the flight but I didn’t recognise anyone. It was a different feeling, but I have to admit I didn’t mind too much. There would be plenty of time for interaction during the week. 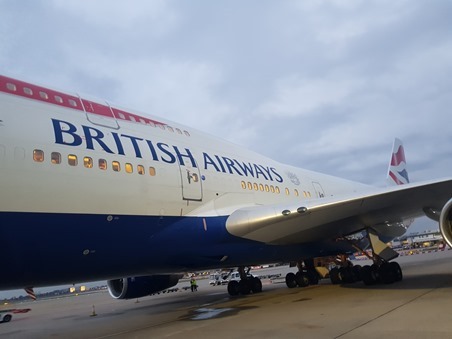 Arriving in Vegas I took an Uber from the airport. It was actually really interesting to do so – I usually just jump in a taxi – if only because it took a more optimal path to the Palazzo, that came up on the hotel via the Sands Expo. 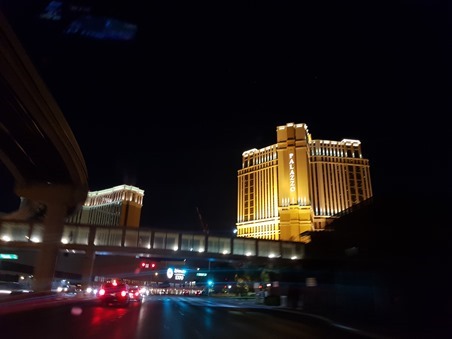 Checking in I headed up to my room, which – as ever in these hotels – was three times as big as I needed with three TVs more than I watch. But hey.

The real fun came when I tried to get the room dark enough to sleep. There was a light between the beds that I just couldn’t turn off. After 30 minutes of tired frustration I ended up calling the hotel reception. The operator told me not to be embarrassed – they get at least three such calls every evening – and described the precise location of the switch. 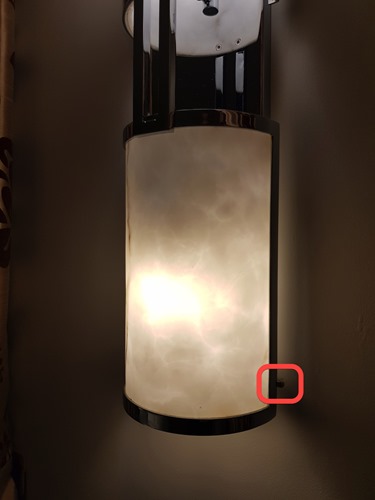 The view from my room was over Trump Tower. Here it is by night: 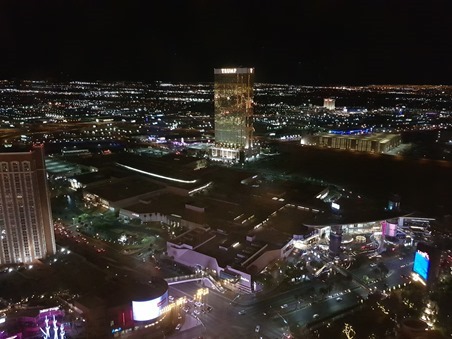 By day I can’t help but feel it has a distinctly peach tint. Ha ha. 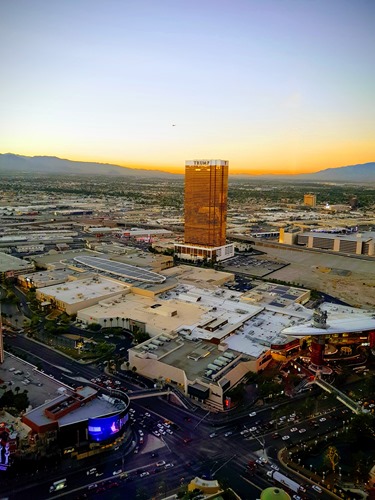 On Sunday I soon ended up enjoying the outdoors in Las Vegas. Here it is, for reference. 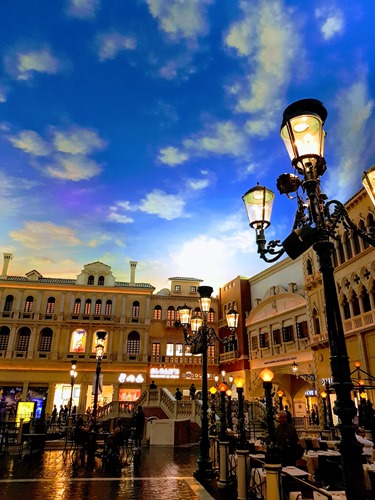 I picked up my badge at the hotel reception, which was very convenient. 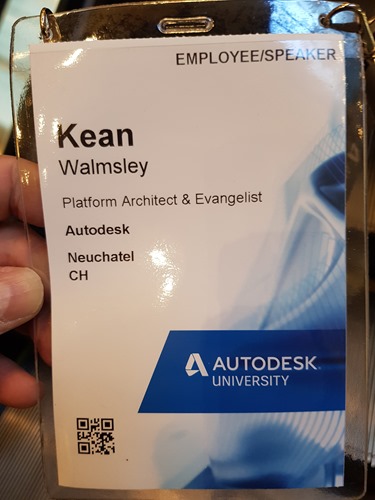 The rest of the day was spent catching up with friends and colleagues, as well as meeting up with the Forge team for dinner.

Monday kicked off with the Forge DevCon  mainstage. 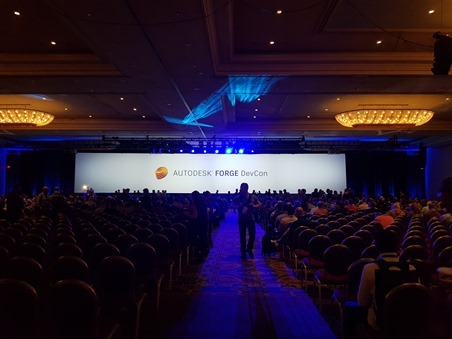 As usual, Jim Quanci was first up on stage. 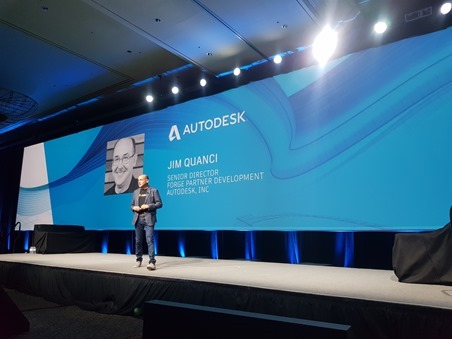 He quickly passed the reins across to our VP of Forge, Susanna Holt. She gave a really interesting presentation that related her experience as a competitive rower to the need for a stable platform. 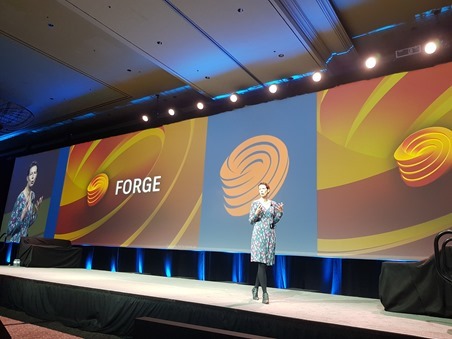 One of the examples she showed was from Imaginit, and involved stairs. I’m including this picture because it has both virtual and physical stairs in it. 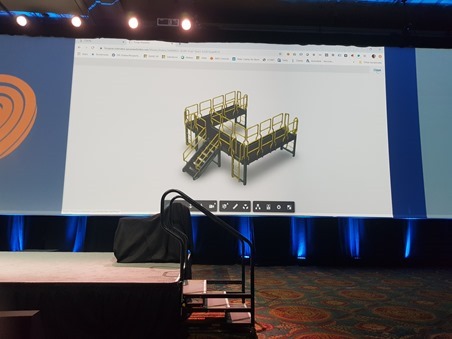 Eric Lam from DPR talked about – among other things – VueOps: digital twins are definitely a hot topic in the Forge space, these days. 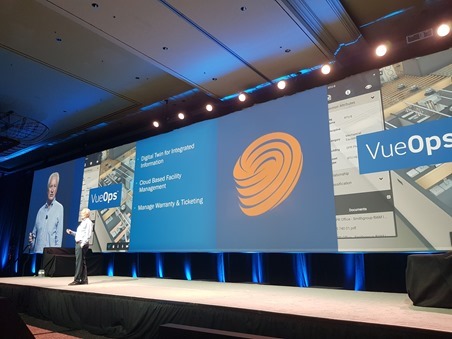 Jimmy Forsberg from Skanska also talked about how realtime data – presented through Forge – is making a big difference to construction projects. 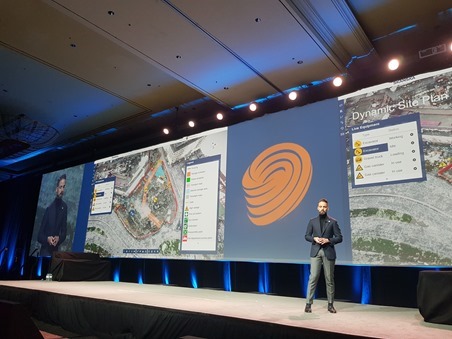 The three external presenters joined a panel moderated by Susanna to discuss their experiences using Forge. 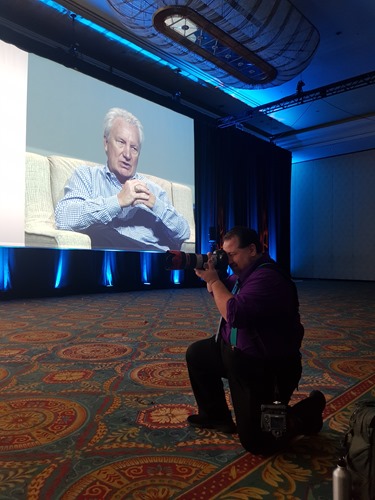 After the Forge mainstage I popped across to the Dynamo workshops. One was being delivered by Lilli Smith, Jaqueline Rohrmann, Alvaro Ortega Pickmans and Sylvester Knudsen. 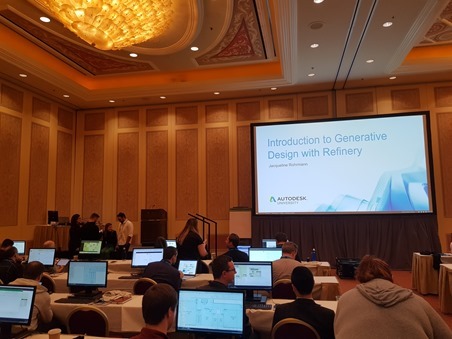 This year there was a really fun exhibit area called The Village. 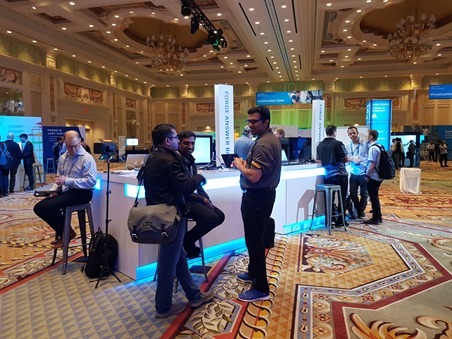 One of my favourite exhibits was an infinity room, which had an LED display on one wall, with the other walls, the floor and the ceiling all made of mirrors. Too cool! 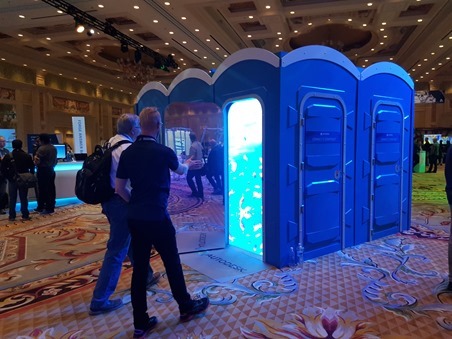 There were artists creating caricatures digitally. 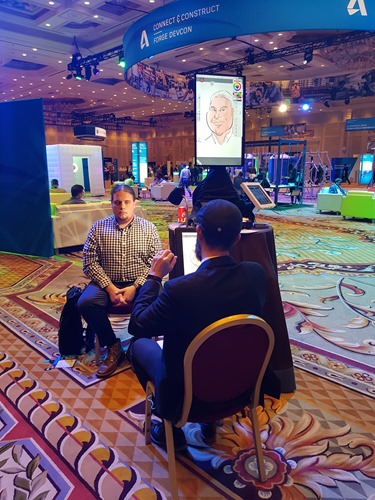 We had a reunion of sorts, when Wayne Wallace met with Kevin Vandecar and I for a drink. We were all working with AutoCAD OEM, way back when. 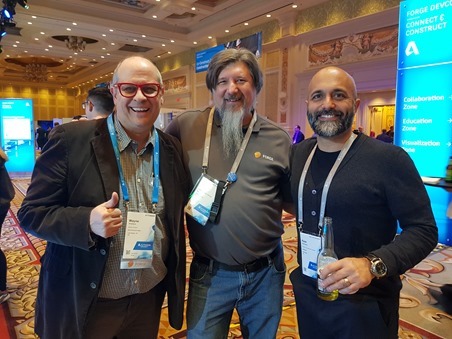 It was also really nice to meet Mercedes Carriquiry and Andy Robert – who I know from social media – as well as Adam, Autodesk’s other Walmsley. :-) 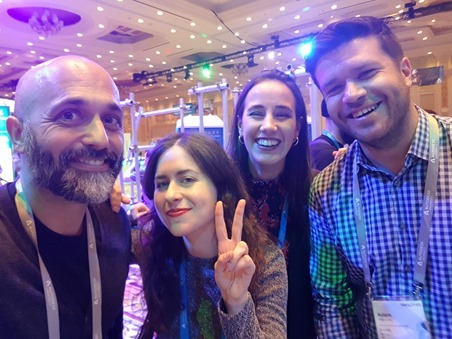 On Tuesday I somehow found myself running the AU5K for the first time. Utter lunacy, but I survived. 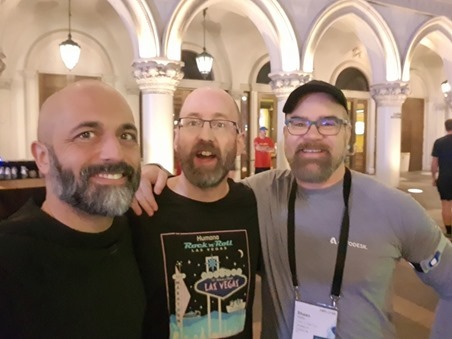 The day’s main event was clearly the AU mainstage. Andrew Anagnost, Autodesk’s CEO, presented a number of mind-expanding projects, including this Marriott hotel in New York that’s been built offsite with its modules assembled into a 26-storey building. 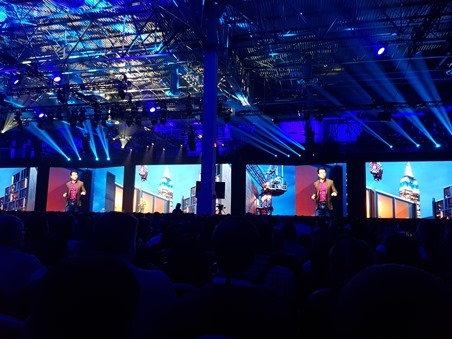 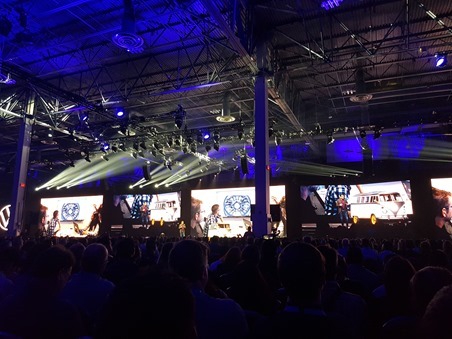 I was very happy to see the fruits of The Living’s latest collaboration with Airbus on mainstage, this time focused on optimising the layout of one of their new factories. 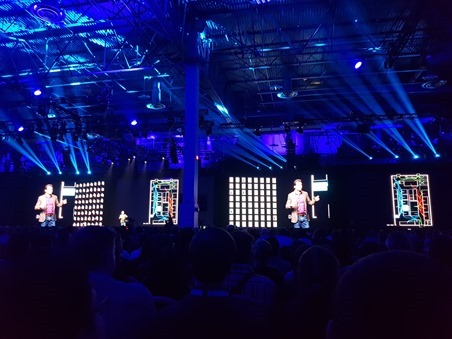 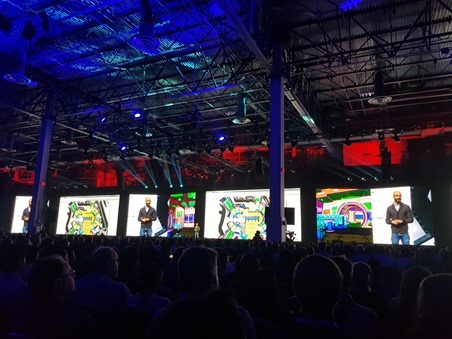 It was a really compelling keynote, I found. Very inspiring stuff. I spent some time at the Ideas Exhange, trying out the VR experience I mentioned recently. I can’t talk more about it, but I found it really interesting. 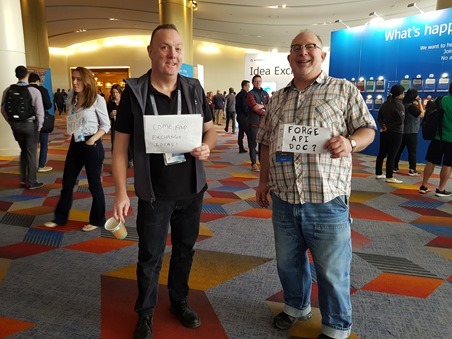 After the mainstage the Exhibit Hall opened, which was a great chance to see the VW bus that had just driven off mainstage. I really want one of these babies. 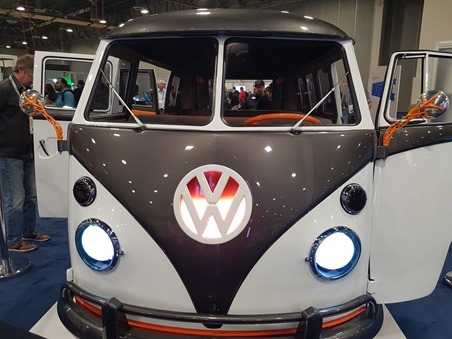 During the afternoon I spent most of my time in meetings, before heading to the Blogger Social, of which I somehow don’t have any photos. It was really fun catching up with so many old friends, though.