I’m happy to announce that the Capturefinery package for Dynamo (and Refinery) is finally ready for posting to the package manager! My main misgivings – stopping me from posting it sooner – had been around the basic UX (fixed in the last update) and the fact that the tool requires (or required) the system to basically be dedicated to the capture operation. These have all now been addressed. 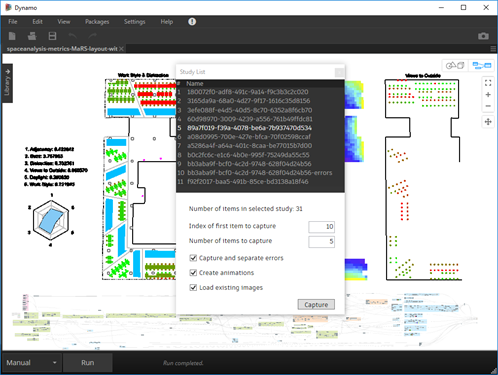 Here are the enhancements I made today:

I also tried it out with the background colour set to pure white by editing the %ProgramFiles%\Dynamo\Dynamo Core\2\UI\Themes\Modern\DynamoColorsAndBrushes.xaml file, as suggested by this forum post. (I changed both WorkspaceBackgroundHome and WorkspaceBackgroundCustom to #FFFFFF.) This makes a big difference to the quality of the animation – especially for the smaller images that have been resized and squashed into the GIF format’s 256 colour-space.

Here’s a sample animation generated by the latest version tool, to give you some idea of the results. I created this one from 4 separate runs, to make sure it all works. (I did post-process the generated file using GIMP to make the frames display for 300ms each, mind.)

I actually like the fact it strips off the Dynamo UI and focuses on the generated graphics rather than including the Dynamo graph. Although that’s also accessible… we could add an option to include the graph, too, if people want that.

I still need to document the tool’s usage and tidy things up a bit before posting, but I expect to do that sometime next week. (We’re starting the long Ascension weekend, here in continental Europe, so I won’t be looking at this until I’m back and have finished up my AU London preparation, as the presentation material is due on June 5th.)

If you’re impatient to give it a try, please feel free to clone the Git repo and build it using Visual Studio, in the meantime.