The Living vs. The Dead: using Generative Urban Design to prepare for the zombie apocalypse

Over the last few months I’ve been working with my colleagues in The Living to add important – but still slightly speculative – capabilities into the Generative Urban Design tool we’ve been working on for Van Wijnen. The opportunity presented itself back at Autodesk University 2018, when Lorenzo Villaggi and I were discussing the state of the world over a few beers. It seemed absolutely clear, from our perspective, that given where we are today – thinking about global politics, the climate and civil liberties – it seems inevitable that the next thing to hit will be the zombie apocalypse.

So it was that we approached Van Wijnen to suggest additional undead-centric features for their GUD tool. Jelmer Frank Wijnia – Generative Design Lead at Van Wijnen – was admittedly initially somewhat sceptical, but we managed to convince him that – while speculative – these features would allow them to prepare for the oncoming onslaught. And given the lead-time on designing and building residential neighbourhoods, it’s by definition too late to prepare for the zombie apocalypse once it has already begun.

We started by looking at additional features to take into account inside our core geometry placement algorithm: we started with perimeter walls with adequate defenses around neighbourhoods, as well as integrating solar-powered radio communication systems and centralized/per-building ammunition storage. Aggressive negative biocontainment also needed to be factored into the plans, especially as we're still not sure via which vectors the zombie pathogen will spread. 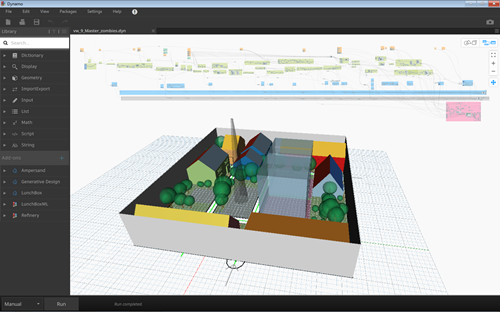 Then we created a new “zombie-ready” metric into our assessment of each design: this takes into account a number of criteria, some of which are clearly at odds with traditional metrics for success. But then generative design is all about allowing the designer to understand these trade-offs and choose an adequate solution that meets the most important objectives. For example, we wanted to maximize “lines of sight” between upper floors of apartments – to make sure residents could pick off the occasional zombie with sniper rifles – but to make sure there were plenty of visual and physical obstacles on the ground floor: open space is nice when you don’t have a horde of brain-eating zombies heading towards you. The Space Analysis package for Dynamo was a huge help in implementing this particular metric, as you can imagine.

Here’s how the tool currently looks (bearing in mind this isn’t exactly the look-and-feel of existing Refinery… I’ve been using this to prototype some additional visualization modes):

While it will clearly take time for any of the designs created by this latest iteration of the tool to be built, the initial indications suggest the project has been a success.

Here’s a quote from Van Wijnen:

When Autodesk Research came to us with this idea I thought they were crazy. But after sitting down with Kean and Lorenzo, watching a few episodes of The Walking Dead while consuming more than a few bottles of witbier, it all started to make sense. We’re very happy with the work that’s been done: the relative flatness of The Netherlands means it’s harder to find adequate vantage points to safeguard from zombie attack. Factoring these into our designs has been of major importance. The “killer” feature of this phase of the project has definitely been the integration of realistic zombie crowd simulations into the VR experience: it’s been a very powerful way of building internal buy-in but also convincing external stakeholders of the need to prepare for what’s coming. And it makes Resident Evil look like a stroll in the park.

And here’s one from The Living:

This has been a very interesting project to undertake with Van Wijnen. At The Living we’re used to projecting forwards into the future and re-imagining necessary changes to the built environment as the world evolves. Mostly these have related to the need for sustainable architecture and construction as the world’s population increases, but thinking about the need to design for the collapse of society presented its own unique challenges. But then people thought we were crazy when started building structures out of fungus!

We're not stopping there, though: we have various ideas on how to extend our technology offering to help mitigate this looming problem. Our Toronto team is enhancing our skeleton extraction pipeline - the one that was used on the MX3D project - to work with atypical body-types (such as those with no legs, dragging themselves along with their finger-tips).

Here are a few of the test images we’ve already processed with the pipeline: 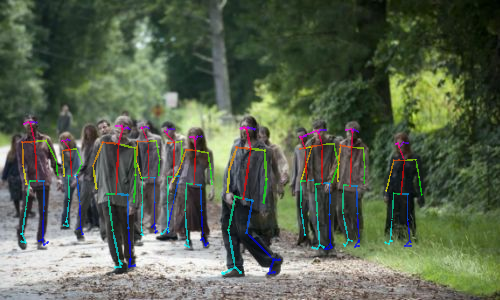 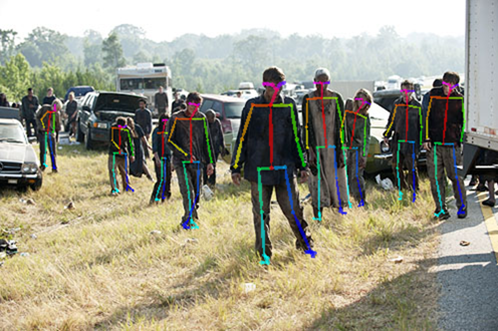 We’ve also performed video tests, of course, which are more representative of the data we’d get from a webcam. It still needs some enhancing to pick out zombies that are further out, but that should be something that’s solved with adequate resolution.

Just for fun, we did this one, too. But I suspect we don’t need to worry too much about zombies attacking in a nicely choreographed dance formation.

Our skeleton-extraction pipeline makes heavy use of the OpenPose pose estimation library.

The main idea is clearly to collect accurate 3D skeleton information – reflecting the movement of zombie herds – and display it in Dasher 360. We’ll use this same data to improve our ability to model accurate zombie crowd flow with SyDEVS, allowing us to perform realistic simulations of zombie attacks by groups of varying sizes on the enclosures Van Wijnen ends up building.

I don't want to understate the importance of this project: you may think this is just a bit of fun – albeit with some cutting edge generative design and digital twin technology – but we see it as being critical to humanity's very survival.

On a personal note, I'm seriously thinking about moving my family to the Netherlands to live in one of these communities as soon as they're ready. If you're thinking the same, be sure to look out for the "Zombieproof" seal of approval, to make sure it’s been designed using this process: 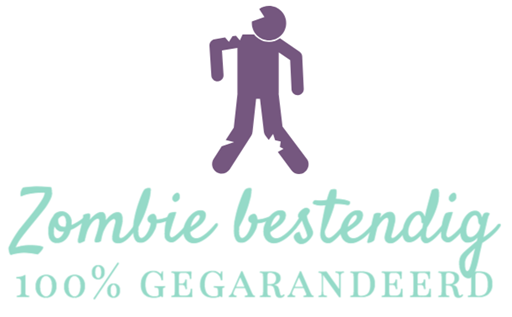 I do expect imitators to appear over the coming months – I’d frankly be surprised if there weren’t other such projects in the works, even now – but you really need to know you’re moving into an enclosure that has been designed using data, not just someone’s over-active imagination.