« Last chance to apply to join the first Dynamo Hackathon in London | Main | The Space Analysis package for Dynamo and Refinery is now available! »

A quick update before a larger unveiling next week…

We’ve made solid progress with implementing the grid-based capabilities of the SpaceAnalysis package. All being well we should have an “official” version available early next week.

This release will contain pathfinding – based on Djikstra’s shortest path algorithm, working on a grid with the size and resolution of your choice – as well as the ability to test visibility – using the same grid for an Isovist-like analysis. We have a version already posted via the Dynamo Package Manager (ssshhhh!), but we’ve gone through and rationalised a bunch of the nodes – their names and their locations in the “API” – as well as integrating the visibility-testing capability, too, so if you go and look now you’ll end up making work for yourself. If you like making work for yourself, then please feel free to check it out. Otherwise, on Monday we should have something with an API you can rely on for a little while.

There will be a few samples to check out, but we’re also working on a larger, urban design-related sample that demonstrates a very typical workflow for Generative Design in the AEC space, where you have a geometry system driven parametrically creating designs, along with a number of metrics that use various approaches – including pathfinding and visibility analyses – to quantify each design’s quality.

Here’s a screenshot of this sample graph – which I’ll post to this blog early next week – being driven by Refinery: 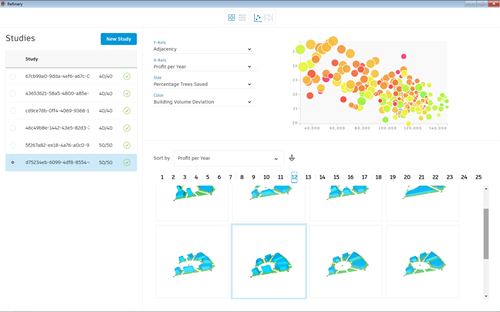 And here’s a close-up with the pathfinding results used to calculate the “Adjacency” metric. (You can choose to display the shortest paths in the graphics collected by Refinery, but I tend not to for performance reasons.) 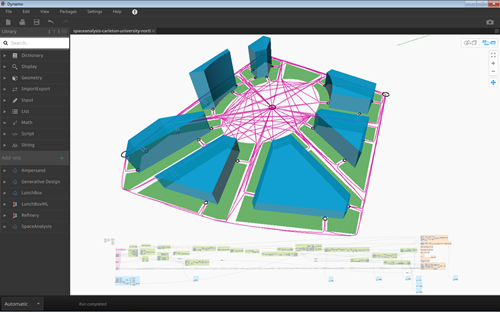 Anyway, I hope some of you share my excitement about this stuff. A lot of you have kindly expressed an interest in testing the Space Analysis library. All being well by Monday or Tuesday you’ll be able to!