A change of CTO at Autodesk

Some of you may have seen the interview on Engineering.com with our new CTO, Scott Borduin. If you don’t already know Scott, I recommend reading it to get a sense of who he is as a person.

Today’s post is both to welcome Scott to his new role and to wish our former CTO, Jeff Kowalski, well on his next adventure.

To say that we’ve seen a lot of change at Autodesk over the last year and a half would be an understatement. Since Carl Bass stepped down as CEO and Andrew Anagnost was promoted into the role we’ve seen changes throughout the company. Some of these I’m sure were underway before Andrew took the helm – such as the closing of the Neuchatel office, for instance – but other changes have come about since. Aside from the office closure, the ones that have impacted me the most were the departure of Amar Hanspal and Jeff Kowalski.

Amar’s departure was a shock but not really a surprise: it’s clear now that his next role was going to be as CEO, whether at Autodesk or elsewhere. Jeff’s departure came as more of a shock although, with hindsight, he’d hinted at life after Autodesk a couple of times in discussions we’d had regarding last year’s round-the-world trip. I’ve known Jeff for many years and have really enjoyed being part of his organisation. I have a huge amount of respect for Jeff’s leadership ability, his technology vision and his humanity. It’s thanks to Jeff that OCTO – our Office of the CTO – does what it does to allow Autodesk to drive forward into key technology areas such as generative design. Here’s a very poor image (but it’s all I have) of Jeff talking about generative design back at the AU2014 keynote, for instance. It’s amazing to see how things have unfolded since! 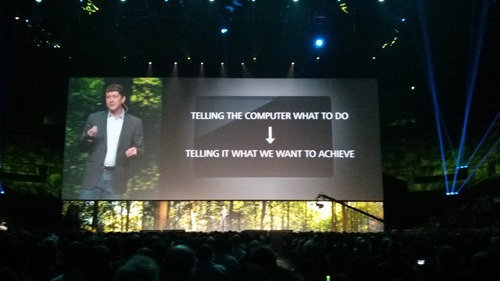 When Jeff announced he’d be leaving – which I’m certain was down to his own choice, in case people are wondering – it was made clear that Scott Borduin would be stepping in as (at least acting) CTO. This was the silver lining to the cloud of Jeff’s departure: I’ve known Scott since he was CTO from 1999 to 2005, and I’m confident we’ll continue on a great path under his leadership.

Anyway – farewell, Jeff, and all the best for whatever’s next: your impact on Autodesk, our software and the way it’s used to design the world we live in has been immense. Thank you for everything you’ve done!

And welcome back to the role, Scott: it’s an honour to finally work in your organisation (something I remember hoping for back in 2003, before OCTO had any significant presence outside of the US). I honestly can’t think of anyone I’d rather see continuing Jeff’s work. See you soon in Las Vegas!