We’ve been in Argentina for most of the week, especially if you count our stay in Iguassu (where we stayed in Brazil but ended up spending most of our time in Argentina). It’s probably a good time to reflect on some experiences between the two countries, before things blur even further. 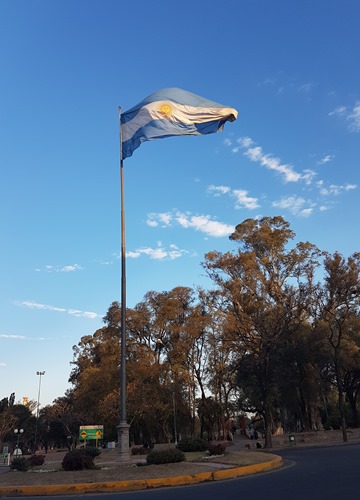 I enjoyed Brazil, but certainly felt we were more at risk there than in Argentina. This feeling might have been driven by horror stories friends (and the media) reported, but still – it was tangible, and I don’t believe at all misplaced. Luckily nothing bad happened, but the feeling was there through a big part of our stay.

Prices were mostly higher in Brazil, but we haven’t found Argentina especially cheap, either. In many areas prices are getting closer to those found in the US and Europe – in some cases, such as for electronics, they’re way higher – while I’m betting that salaries are nowhere near.

Getting hold of local currency can be a challenge in South America: we didn’t want to travel with a huge wad of dollars or Euros, so we’ve been relying mainly on ATMs. This has been OK, in the most part – and avoids the mess of currency exchange – but you often get hit with additional fees. This was avoidable in Brazil – depending on the bank you chose, you could avoid charges on this side of the pond, at least – but completely unavoidable in Argentina. To give you an idea, you can only currently get AR$2000 (about US$116) in any single transaction from most Argentinian ATMs. For this you pay a AR$105 commission (US$6) on top of any fee you might have on the other side (which for my banks means US$5 or so). So you’re basically paying 10% or more in fees. This was irritating to start with, but I’m now getting quite used to it. It also seems to be a general rule, which makes me feel less singled out and much more sympathetic to locals who probably have to deal with this all the time.

One thing that really struck me in Brazil was the huge number of pharmacies… in Rio this was noticeable but in Foz do Iguaçu this was insane: there were 7 in a small section of the street our hotel was on. I’m really curious why this is… does it relate to the nature of healthcare in Brazil – people rely more on pharmacies for medical advice, perhaps – or something else?

Another thing I noticed in Rio – not so much elsewhere in Brazil, admittedly– was that a lot of people had what appeared to be Polynesian tribal tattoos. I’m curious whether there’s a large Polynesian population in Brazil, or whether this is a trend of some kind (the Moana effect? :-).

Something common between Brazil and Argentina is the profound market penetration of Coca Cola. In Brazilian supermarkets I visited there was a fridge full of Coke at each checkout. (I couldn’t find a fridge containing beer in the whole store, but that’s a separate issue.) In Argentina – this time in restaurants – it seems everyone is drinking Coke, even 2 year-old kids.

One thing we’re finding much easier in Argentina is language: my wife speaks Spanish fairly fluently, and I can get by with simple things. Spanish helped a bit in Brazil, but English was next to useless… it was often quite hard to understand and be understood. So being in Argentina is much easier for us, from that perspective.

We took our first bus in South America, last night, and it was really nice. We’d been advised against taking them in Brazil, but we really want to minimise our use of cars elsewhere in South America. We booked an overnight bus from Córdoba to San Miguel de Tucumán. We chose the “cama” option, which ended up costing about US$50 per person (“semi-cama” was slightly cheaper but not significantly so) for the 325 mile journey. The seats reclined almost flat, so we found it fairly easy to sleep. One downside was arriving at 4:45am and then having to hang around the bus station in Tucumán until we could get into our Airbnb at 9am. This was a little rough, but the kids were absolute stars – they didn’t complain at all.

Logistics on this trip have been a bit challenging, at times. The fact we have whole chunks – such as through the National Parks in the US – where we don’t have firm plans in place can be both liberating and frustrating. From time to time I just dive into problem-solving mode and buy us a few days of peace by making sure we have transport and accommodation sorted for that time. (Once or twice – typically just after a leg of the journey that’s particularly exhausting, for whatever reason – I find it hard to enter problem-solving mode and veer towards “curling up in a ball” mode until I find the energy to try again. This has so far been fairly rare, I’m happy to say.) Right now, for instance, we know we’re staying in Tucumán until Monday and then taking another (this time daytime) bus to Salta. We don’t yet have accommodation in that city, but I know from Airbnb that there’s quite a bit available, so my stress levels are fairly low.

I’ve tended to use Airbnb and Booking.com for most of our accommodation when we’re not camping (or winging it, like we occasionally did in the US). These have worked quite well for us, although I get very irritated with the Airbnb app: it works very poorly when offline (which is often the case for us on this trip: I’m avoiding roaming, when I can, and sometimes roaming doesn’t even work… this has been the case for us in Brazil and Argentina, for instance). One thing that has worked well for us is TripIt, which I’ve configured to scan my Gmail account. So when we get confirmation emails through from hotels or Airbnb, these get integrated directly into our MOAI (Mother Of All Itineraries). Which means that even if the Airbnb app fails to tells me the address of our accomodation, TripIt often comes to the rescue.

Anyway – those are enough musings (or ramblings), for now. I’ll probably write a little about Córdoba and Tucumán, at some point, but these are fairly low-key cities that we’re treating as stepping stones to Salta and beyond. And a good chance to do a bit more roadschooling, too.