« Preventing selection of room geometry in the Forge viewer | Main | Flights are booked! »

A few days ago I was reminded of a topic I’ve highlighted in a number of presentations I’ve given over the last few years, but have never actually talked about on this blog. The closest I came was probably in this post.

Many people don’t realise Autodesk was an early innovator in the VR space. In the late 80s and early 90s we had a product called the Cyberspace Developer Kit – which allowed you to deliver around four frames per second of glorious, low-polygon 3D via a 386 or 486 PC – that was clearly ahead of its time.

Here’s an image from the March 1993 edition of Popular Science showing the typical HMD of the time, alongside the 3D content inside “cyberspace” and inside AutoCAD. 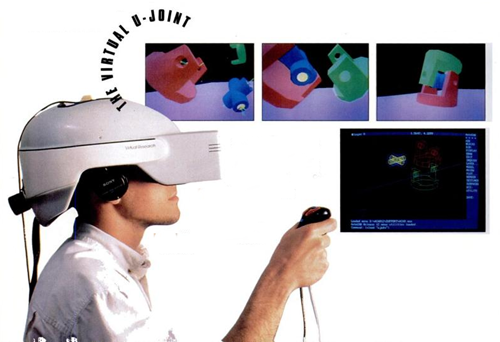 An article from 1990, reprinted in Backchannel, talks a little about Autodesk’s role in the burgeoning VR industry of the time. This article mentions a demo video from the 1980s with Timothy Leary that is now available online:

(A big thanks to my friend and colleague Brian Pene for sharing the Backchannel link and the accompanying video.)

Here’s another video – this time from the early 90s – that talks about Autodesk’s vision for VR. The Autodesk segment starts at 6m20s, but the whole thing is well worth a watch.

I also came across this series of photographs that were taken at Autodesk in Sausalito, back in the day. The third of these is absolutely hilarious, and shows that we were at least partially aware of the broader potential for VR technology.

So why did Autodesk fail to cement its position as a leader in VR? At least part of the reason is that the VR industry in general collapsed in the mid-90s. Here’s the Gartner Hype Cycle for 1995, which shows it on the way down. 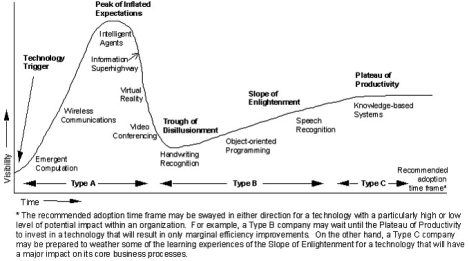 Fast forward 21 years to 2016, and we can see that it’s now finally starting to become productive – largely thanks to hardware improvements driven by the smartphone revolution. 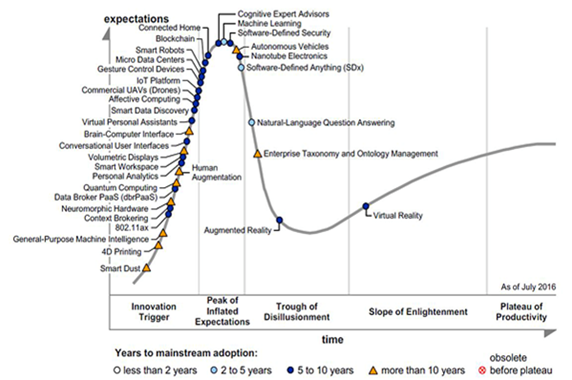 Sometimes I wonder whether we’re really clambering onto the plateau of productivity… sometimes it feels as though we’re just in another wave of inflated expectations because two full decades have passed since the last one: many people have either forgotten the first wave or its a different set of people who are currently excited about it (I suspect both is true). Gartner’s model is for sure a simplification of reality, albeit a useful one, so I wouldn’t be surprised if there were more speedbumps along the true path to productivity.

We’ve certainly seen technologies such as 3D printing and UAVs need to be broken out into consumer vs. enterprise segments given the collapse of both their consumer markets: I can well imagine that the same will be true for AR and VR. My suspicion is that the consumer-centric hype around AR and VR is overblown, while real value will be derived in professional applications for several more years before the technologies reach consumer ubiquity.