Happy New Year, everyone! This is my first day back after two full fantastic weeks off. We were up in the Bernese Oberland for the full 16 days and even managed to ski (or – in my case – snowboard) for 13 of them, despite an initial lack of snow. At the beginning of the break the conditions were like this: 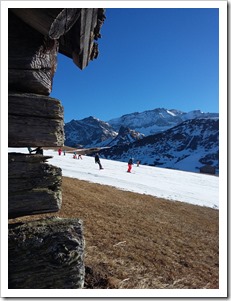 But thankfully by the end it was more like this: 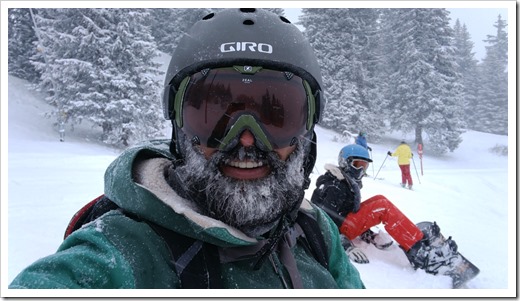 As a bit of an experiment, I’ve started to use the place where we stay in the mountains as a small-scale test-bed for home automation: as a holiday place it makes sense to be able to monitor and control things at a distance, and it’s also somewhere I can start to introduce technology that doesn’t mess too much with the status quo (“What – I need to install an app to turn the lights on?!?”).

Now I need to make sure it’s clear that while part of my responsibilities relate to the Internet of Things – to the extent that Dasher 360 participates in it – I’m far from being an early adopter of IoT tech, in general. For instance, last summer I toured Target’s IoT showroom in San Francisco – witnessing baby bottles that auto-heat when their future consumer wakes and starts crying – and found it a thoroughly depressing vision of the future. I’m overall more in favour of finding ways to limit the impact of technology and reduce our reliance on it (particularly for the younger generation) rather than having it infiltrate all levels of our lives. So you do need to use that as a lens through which you should read my IoT-related ramblings (i.e. I’m basically an IoT luddite).

While remote activation of heating systems – something that’s steadily becoming more viable in Switzerland, despite Nest not yet being available here – is of primary interest to me, it isn’t where I’ve started. I’ll be getting a professional service to take care of installing that, as I really don’t want to mess anything up on that front.

My first real foray into home automation was to install a Hue bridge and a number of Hue Go (plus a couple of old Living Color) lights. I haven’t gone as far as replacing any standard lightbulbs with Hue versions: we’re all happy enough with our integrated lightswitch controls and so use the Hue setup as a parallel setup.

The next step was to get Alexa – in the form of an Echo Dot I picked up in Amazon’s Black Friday sale – and give her the ability to control said lights. This, in itself, was pretty neat: the kids get a kick out of asking Alexa to “turn off the living room”. Alexa isn’t yet supported here in Switzerland – presumably for language reasons – so I’ve had to jump through a few extra hoops and put up with some quirks. For instance: I’m not able to install the Alexa app on my phone – it’s “not available in my country” – and also can’t set the location of the device to something meaningful. I can live with these issues, for now, though: I don’t expect to be able to use Alexa to order pizza or book an Uber while up in the Alps, anytime soon.

As the TV in the apartment was pretty ancient, I figured it was time to upgrade to something a little more “smart”. About 6 months ago I’d started thinking about having curated mood lighting for TV shows – such as Game of Thrones – and tweeted as such. The response was the first time I’d heard about Ambilight – which doesn’t even need curation, it works dynamically from the screen colours – but I didn’t really think about it more until just before the break when I decided to buy a new TV.

So it was that I ended up buying a Philips Ambilight TV that connects with the Hue setup. And I have to say that it’s really cool, especially at night. 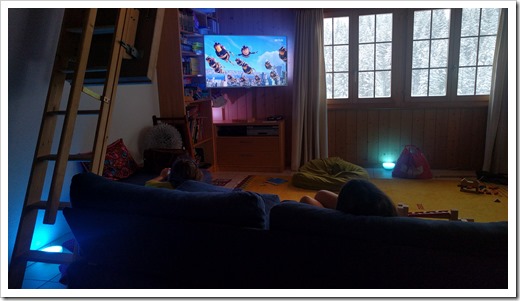 Our new TV runs Android, so at some point I’ll experiment with using it with Google Home, just to see how the experience compares with using Alexa. We’ll see how that goes.

On a side note… my wife was a huge fan of the original Legend of Zelda video game when she was a young girl. When across at AU 2016 in Las Vegas, I tried hard to get my hands on a NES Classic Edition console. It was the weekend it launched, and I naively assumed I’d be able to just pick one up in Brookstone. It turns out demand was “significant” and soon they were only available on e-Bay for $300 (as opposed to their original $60 price tag). Boo.

I tried again once back in Switzerland, but I’m still on the waiting list here. So it was that I dusted off my Raspberry Pi 3 running RetroPie + Emulation Station – something I talked about several years ago – and we used that to play Zelda, instead. It was really great to see my younger kids geeking out on 8-bit videogames in pretty much the same way as my wife and I both did as kids. Although Ambilight+Hue did take it to another level, I have to say. :-) 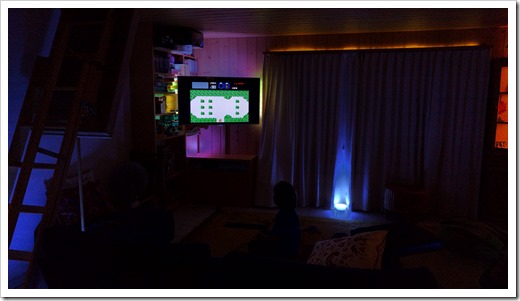 As you can see I’m very much at the beginning of this particular journey. I know many of you will be much further along than I am – and have interesting plans for going much further – so please do let me know of anything you’d like to share in this area. I almost certainly won’t be at the cutting edge, myself, but I love hearing from people who are!