Our VR room is ready!

Today is a good day. After long months of preparation, the VR room at Autodesk Neuchatel is up and running! We’re still waiting for a sofa and chair for waiting guests to relax in, but otherwise all is finally ready. 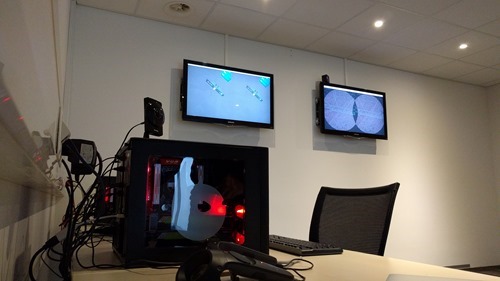 Here’s a quick video I shot to show you around the room.

I spent probably a day and a half this week struggling with why the Vives weren’t working properly. The tracking was fine – I could see the supposedly mirrored views just fine – but the Vive displays themselves were blank. At first I thought I’d made a mistake with the ports I’d plugged the Vives into, but eventually I found the root cause of the problem. With the HTC Vive Business Edition you get a powered extension box. We needed these to be able to have the Vives’ cables coming through the middle of the ceiling. When I’d given the cables and the extension boxes to the electricians to place, I’d apparently plugged the first section of cable the wrong way round.

Now these cables consist of three things: USB 2.0 for telemetry from the headset, 5V power and HDMI for the display. None of these are directional, as far as I’m aware. And yet when I pulled the cables out of the walls and ceiling and put them the right way around, everything worked. Well, sort of: the displays started working, but they were very flickery. In the end I bought some DisplayPort –> Mini DisplayPort cables – rather than using the DVI –> HDMI converter and the provided HDMI cable – and the flickering disappeared. I didn’t even need the 4K DisplayPort 1.2 cable: DisplayPort 1.1 was just fine. I can tell you I was relieved when it all started working properly. :-)

One thing remains, and that’s to choose a name for the new room. I like the sound of “VRoom”, but then I don’t have a particularly good track record with these things: I suggested “The Smoking Corner” as the name for the lab containing our 3D printers and laser cutter, which for some reason didn’t make the cut.