« A busy day at EPFL | Main | The European DevDay in Munich »

During the lead up to Autodesk University 2016, held a few weeks ago in Las Vegas, we made a number of key updates to Dasher 360. For those of you who haven’t heard of it, Dasher 360 is Project Dasher re-imagined for the web using Autodesk’s Forge platform.

Here’s a video that shows many of the enhancements we’ve made in recent months:

Aside from my AU2016 class on Dasher – and how we used Forge to implement it – Alex Tessier and I presented Dasher 360 during the Construction Launch Pad event in front of around 1,000 attendees. Our segment was quite brief – I spent the majority of my half of it talking over the above demo video – but we received some nice feedback. The recording isn’t yet live on the AU web-site, but I’ll embed it in a post once it’s there.

To give Dasher 360 a try yourself, head on over to Dasher360.com and click on the “Demo” button. You’ll be able to explore sensor data relating to the 210 King St. East building, although you won’t be able to perform some of the administrator-only workflows shown in the video.

There are a few additional features we’ve been working on since AU. They’re not yet live on Dasher360.com, but here’s a quick preview of the first… Simon Breslav, my talented colleague who has been doing the lion’s share of the work on Dasher 360 lately, managed to get this updated version of “surface shading” (although it’s not really truly on the surface of the geometry, right now) in a little over a day. What’s interesting about this version is that it’s based on real sensor locations, and to some degree real data. 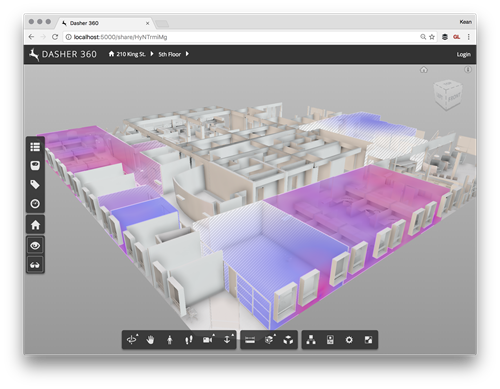 To make sure this approach worked with animating data captured over a time period, Simon went and added animations based on some theoretical sensor readings.

We’re calling this “disco mode” internally: we really need to make sure it gets into Dasher 360 as an easter egg – I don’t expect the sensor variations to be quite as visually interesting, once we get those hooked up properly. I’m also investigating enabling VR exploration of models using Dasher 360 – the latest version of the Forge viewer that’s currently in development has support for WebVR – which would be pretty cool with disco mode enabled. Assuming it doesn’t mess with your brain too badly, of course.