It was a first for the Neuchatel office, so we really weren’t quite sure how it was going to turn out. But yesterday’s Design Night ended up being a huge success, with around 400 people attending. Wow!

I was asked to be part of the core team organising the event several months ago. Aurelia, Olivier and Sokhanita – three colleagues from the Neuchatel office – and I have been meeting on a weekly basis since the beginning of June to plan the event. My role was largely “technological” – in that I was there to help out on all things related to Autodesk’s products, customers and industries – so I was thankfully spared a lot of the hard work the other three have had to put in to make sure the event went so well. Hats off to my partners in the core team, as well as everyone who worked so hard to make it happen. 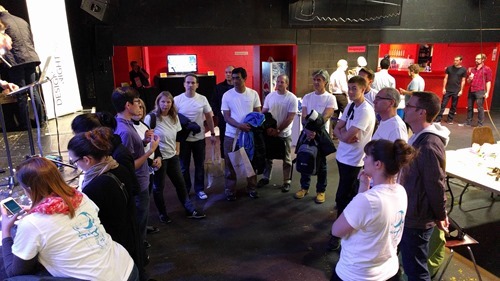 I wasn’t able to move around very much, during the night – I was either demoing HoloLens or talking with people – but I did manage to capture a few photos. Thankfully I had Fernando, Hashim and Yannis helping me out with the demos, otherwise I wouldn’t even have been able to do that. 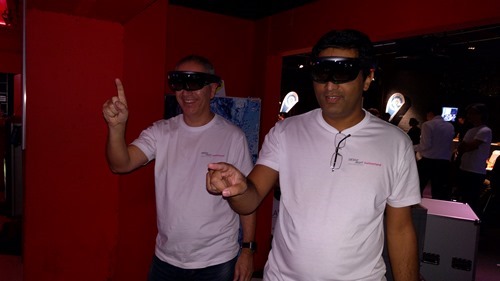 At 4:30pm we had a closed-doors session with some presentations from local officials and from Roberto Sigona, Autodesk’s VP of Global Services. A couple of the presentations focused – quite naturally – on how things have changed over the last 25 years. I enjoyed the trip down memory lane.

The main session started at around 6pm, as the doors opened to general attendees…

Birdly was immediately a huge draw for the crowd – it was busy from the minute the event started until the last person left at the end of the evening. Here’s a quick snap of some of my Autodesk colleagues taking it for a spin – with Max and Samuel from Somniacs – before anyone arrived. 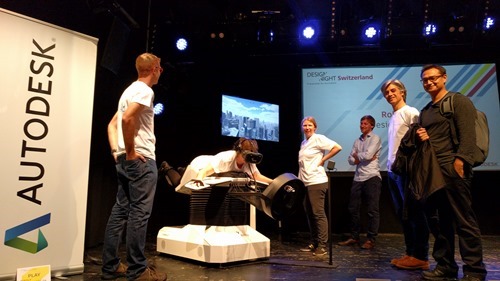 At 7pm Professor Dario Floreano took the stage to talk about evolutionary robots, particularly highlighting the work by his researcher, Alice Concordel, on Robogen. This is a fascinating area of research, and has a lot of conceptual links with our Project Dreamcatcher. I’m looking forward to getting those two groups connected. 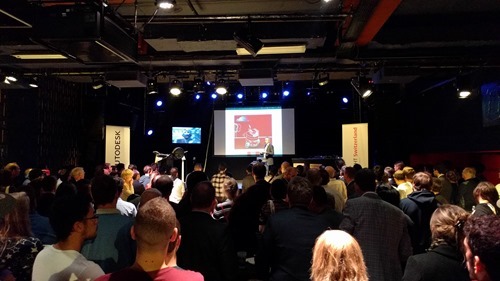 The food – a buffet – was very good, although I didn’t get to eat much of it. Aside from a bar service for wine and soft drinks, people loved getting served beer by the Nextage industrial robot, courtesy of Rollomatic. 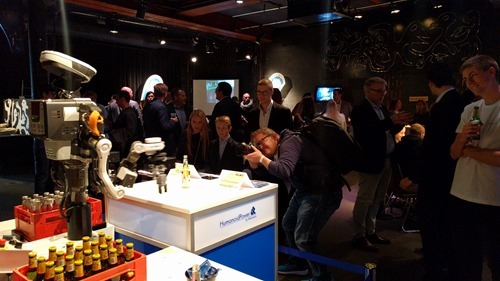 P-Rob did a great job serving coffee… I didn’t get a good picture of this bot, but I’ll be sure to post one on later on (I’m heading back down now for an employee-only session). One really funny thing happened during testing: I was the first person to get a coffee during installation, but the big red “STOP!” button was just in the way of one of its movements. It effectively committed suicide (although not permanently)… breaking Asimov’s third law of robotics, no less. :-)

On the workshop side of things, our local Fab Lab had a very popular area where people could make their own robot. Here’s the aftermath, just to give you a hint of the fun people had. 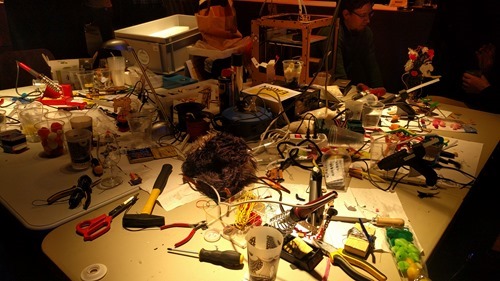 Robosphere from La Chaux de Fonds did another great workshop using the Thymio robot – also from EPFL – to learn robotics programming. Here’s a quick snap I took of Serge – Robosphere’s president – shutting down the R2-D2 he used to project robot videos onto the wall (yes, it really does that, and its remote control is a Millenium Falcon). 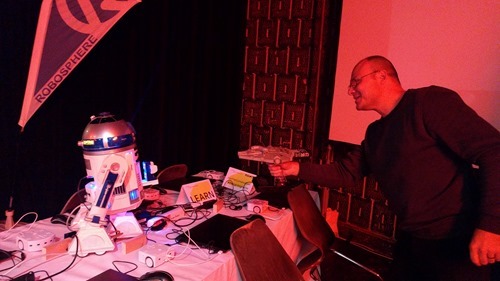 On the way out I caught a fun light display with an Autodesk banner in the background.

I wish I had better photos capturing the night’s fun. There were a number of photographers wandering around, during the evening, so I’m sure I’ll get some to post, at some point. In the meantime, the press coverage of the event has started, which is nice to see.