My Swiss Tech Talk at Autodesk

Yesterday I had the honour of presenting a Swiss Tech Talk in Autodesk’s Neuchatel office. I’ve attended a number of these events over the last year or so – on such diverse topics as Bluetooth, IP issues related to the cloud and IoT, and the changing face of management consulting – so it was a great pleasure to be invited by the Swiss Tech Association to deliver a session on behalf of Autodesk.

I figured the audience wouldn’t be interested in hearing about AutoCAD APIs – sure, I find this fascinating, but different strokes and all that – so I worked with Stoyan Gern and JB Rossel, the co-organisers of the event, to find an appropriate topic. We settled on “generative design”: a topic that was likely to resonate strongly with the local design community and also one I’m planning to talk about at ETH Zurich at some point over the coming months.

It didn’t make sense for me to prepare the material from scratch, so I reached out to our CTO, Jeff Kowalski, who kindly shared a presentation deck he’d delivered at Euromold 2015. This was perfect – it talked not only about generative design but why it’s critical that we fix additive manufacturing to get there. And – perhaps even better – Jeff’s Euromold keynote was capture for posterity on YouTube, which made it much easier to prepare my own delivery.

I spent quite a bit of time preparing our new coffee area for the event, yesterday afternoon: I had the Autodesk Show Reels from 2015 and 2016 on USB keys to play on the room’s large-screen TVs (although for some reason one didn’t want to play ball – thanks to Raphael Racine for getting hold of a PC at short notice to play the videos the old-fashioned way) and we kicked off some 3D prints on our Ember and Makerbot (thanks to Fernando Oliveira and Francesco Tonioni for that side of things), to make the message a little more concrete (or maybe that’s plastic? ;-).

The show reels are also on YouTube, in case you want to check them out.  They’re always a lot of fun: my kids (OK, yes, that includes me, too) love them.

Now for a little more background on Swiss Tech Talks…

The format of these sessions is really interesting: they specifically limit attendance to 30 people. This is clearly a long way from the Euromold event, which would have had hundreds – even thousands – in the audience, but it does have its advantages: the sessions have a much more intimate setting, and are therefore much more interactive. 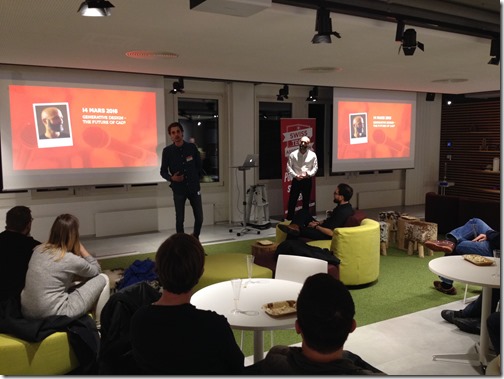 The examples used in the presentation clearly resonated with people: we showed how generative design has been used by NASA to redesign a communications antenna, and how Project Dreamcatcher might design a motorcycle swing arm and a Formula 1 roll hoop. Compelling – and visually interesting – subject matter. Thanks again to Jeff and to Darren Brooker for sourcing this excellent material. 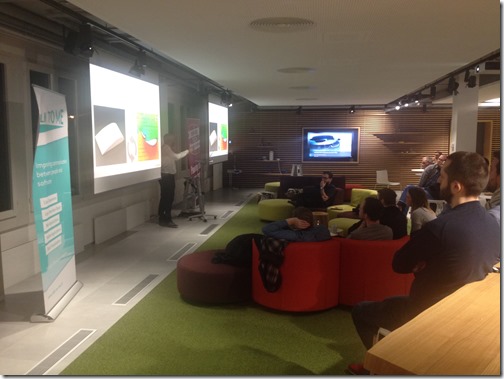 While I didn’t take many questions during the session itself – apart from a few during the unscheduled break where I had to kill and restart PowerPoint – the questions and peer-to-peer interactions with the audience came thick and fast once it was over. Of particular interest was the ability to introduce an aesthetic element into the design process, whether codified in some way via generative design, or evaluated via deep learning. It’s really stimulating talking about this stuff with people who are hands-on in the design industry. 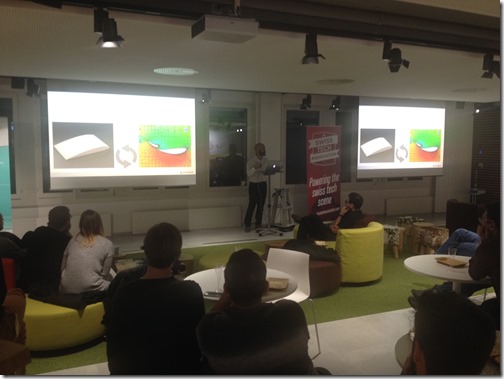 One nice bonus was having Jonathan Droz come along with his 360 camera rig. Sometime over the next week or so he’ll be sharing 360 degree stills and videos of the event. Not the whole thing, but hopefully enough to give some flavour. I’m really looking forward to seeing how they come out!

Finally, an additional thanks to Aline Michaud, Aurelia Guillaume-Fabbri, Sandra Vauchar, Vladimir Brdar and Antonio Renna for their support. Everyone chipped in to help make this first Swiss Tech Talk at Autodesk a success.