Our holiday on Andros

The next few posts may seem a bit anomalous – yes, I more commonly write about programming with AutoCAD – but then I’ve been sitting on a variety of beaches on the Greek island of Andros for the best part of the last two weeks, so for now it’s all I have to write about. :-)

In today’s post I’m going to introduce Andros, one of the islands in the Cyclades island chain, while in the next post I’ll talk about its beaches.

Here’s a quick Autodesk-centric anecdote, though. I wore a pair of flip-flops with the Autodesk logo during basically the whole vacation: they started off nice and new, but over the course of the holiday the logo on each was worn away to nothing by my feet (they’re now just plain black). Which I found nice and symbolic: the logos faded as I gradually relaxed and stopped thinking about work (although in reality symbolism has its limits: ubiquitous wi-fi meant I was still on Twitter at least a few times a day…).

I’d last visited a Greek island 25 years ago, long enough ago that I no longer remember which one. Although as I’d reached it by hydrofoil from Piraeus – rather than by ferry from Rafina – it definitely wasn’t Andros.

On this trip we ended up visiting Andros as some good friends of ours in Switzerland – who are Greek and have a family property on Andros – chose it as the place to organise the baptism of their second child (a major event in their culture: congratulations, little Δημήτρης!). It seemed a great opportunity for us to discover the island, so we decided to book 12 nights there, with an additional night’s stay in Athens at each end to break the journeys there and back as well as to give us the chance to climb the Acropolis and walk around the Plaka. 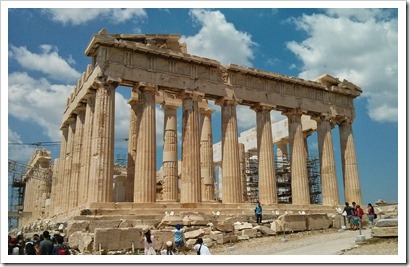 Getting to Andros was fairly straightforward: the ferry only took two hours to get from Rafina to Gavrio – the primary port of Andros – where we picked up our rental car. Some friends rented cars in Athens rather than on the island, which has its pros and cons (we weren’t sure we would need a car for the full time we spent on the island, but we ended up keeping it for all but the last day, when we chose to visit the beach next to our hotel). Unless you’re going to stay in the same place for your time in Andros – or be reliant on taxis – you’re really going to need a car, though. 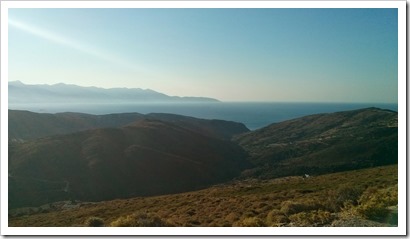 Andros has a quite rugged beauty, even if it’s apparently quite green compared with other islands in the Cyclades. The island is criss-crossed by these amazing dry stone walls with large slabs placed vertically that are held up by sections with smaller rocks used as bricks. 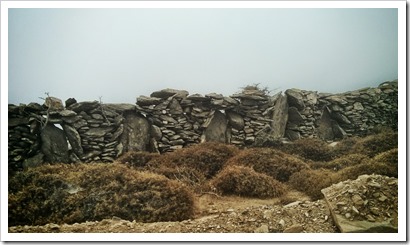 You certainly get the sense that back at the beginning of the 20th century – when the island had twice its current population of 9,000 – the countryside must have been quite something to see, when it was still presumably still viable to cultivate land split across such small terraces. 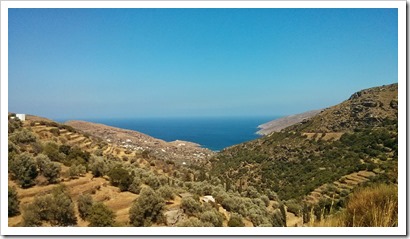 Andros’s tourism industry has largely remained domestic: I’ve been told this is because the land-owning Athenian bourgeoisie has blocked attempts to build large-scale hotels there, but whatever the reason it’s certainly true that we were mostly surrounded by Greek tourists. We came across a small number of English- and French-speaking tourists but didn’t hear anyone speaking German or Italian, for instance.

Despite a focus on domestic tourism, road signs and menus are mostly also in English. This helped us a lot, especially to start with, as it does take longer to read most Greek words. A friend who’d already visited Andros had pointed out that it’s worth trying, though: there are lots of words that are familiar, if you already speak a Romance language, as long as you can translate from Greek characters. And if you’ve studied mathematics or physics – or just attended an American University, for that matter – then there’s a good chance you’ve already been exposed to quite a lot of the Greek alphabet.

Andros is often very windy. This has some benefits – we didn’t get bothered at all by mosquitoes while we were there, for instance – but does drive certain behaviours, such as choosing a beach providing more cover for the wind direction on that particular day. We only had one day where the wind caused us to avoid beaches altogether, during our stay.

While short on mosquitoes, Andros does have plenty of bees and produces a great deal of honey made from thyme nectar. It was a great way to start the day, eating Greek yoghurt mixed with local honey, although when eating breakfast outside at our hotel we had to battle some very aggressive wasps for the pleasure of doing so.

Between eating and visiting the beach, there isn’t actually a great deal to do on Andros in the summer: we had planned on renting bicycles or going for hikes, but it’s just too hot and heavy for that. There are a couple of larger towns to visit: we went to Batsi and the island’s capital – which is either known as Andros town or Chora, which appears to be the local term for an island’s capital – but we didn’t spend a great deal of time in either. 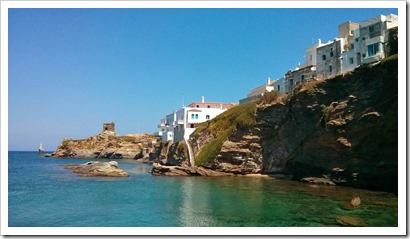 Thankfully we enjoyed the beach a lot more than expected. I don’t usually enjoy more than a couple of days at the beach, as a rule, but when I think about typical beach holidays I think of the crowded beaches of the south of France… not at all my thing.

My wife and I both enjoy scuba diving – which is something you can do from Andros, too – but as we were with the kids we stuck to snorkeling. We really didn’t see many fish underwater, though: the seas around the coast – even around reefs – were really bare. I hope this wasn’t due to overfishing, but it sadly seems likely to be the case.

We still enjoyed the incredible seafood available on Andros – it’s so rare that we’re near the coast – but I got the sense that most of what was served was brought in from elsewhere. 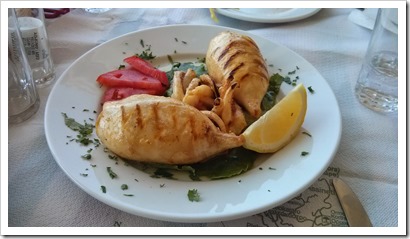 Fishing is just one industry that’s under pressure in Greece, these days, of course. A number of people visiting the baptism (or the hotel we were staying in) from Athens – whether journalists, stockbrokers or civil engineers – were out of work, with little cause for optimism. It’s very sad to see such a beautiful country – and the cradle of Western Civilisation – in the depths of a financial crisis.

I did meet an AutoCAD user while on the beach, though. His business is evolving in new directions due to the state of the economy, but AutoCAD is still a key tool for his company: he even proudly showed me the fact he had AutoCAD 360 on his iPhone and an email from Autodesk in his inbox (I’m less proud of that last point, but hey).

In the next post we’ll take a quick look at my top 5 beaches on Andros (of the 8 that I had the chance to visit), in case you ever get the chance to travel there. In the meantime I’m heading up to hike in the mountains during my last few days of vacation (I’m officially back from next week).

[The good news is that I’ve just received my 3D Robotics Bluetooth Data Link, which should allow me to add telemetry – and properly use DroidPlanner for “one button 3D capture” – with my Quanum Nova. More on that next week, though!]