Using an Arduino with an arcade joystick to control lasers

As mentioned in the last post, I had some fun ripping apart laser pointer key-rings and repurposing their laser diodes to (at last!) use my Arduino to blink something a bit more interesting than LEDs. This project is really just about blinking lasers using the switches inside a joystick – nothing very complicated. I’m not using servo or stepper motors to create a controllable laser turret or even my own 3D scanner (both of which sound like interesting future projects ;-).

A quick note on the source of these lasers. I picked up a bunch of laser pointer key-ring that a local retailer was about to throw out (the batteries had leaked in many of them). I found a way to rip out the laser diodes, which are rated at 1 mW (which shouldn’t be damaging to the eye, as long as your blink reflex kicks in) and take 3.5-4.5V. So I’m using a 50 ohm resistor for each to take the 5V input from the Arduino down to the right range. All fairly simple stuff.

The trickiest part of the project ended up being the connection of the circuit to the ripped-out laser diode components. The approach I settled upon was to use twist ties (the ones that seem to come in all children’s toys, these days) as the primary wires, as they’re both small enough – once stripped back, of course – to fit the breadboard and strong enough to support the weight of the laser. I used some alligator clips to hold and run current to each laser and then taped a simple, separate ground wire to the outside of the laser. Or perhaps I have that backwards – in any case, it worked. :-)

Here’s a photo of the configuration from the front – I could have pointed the lasers in different directions, but left them pointing downwards for the video, in particular. 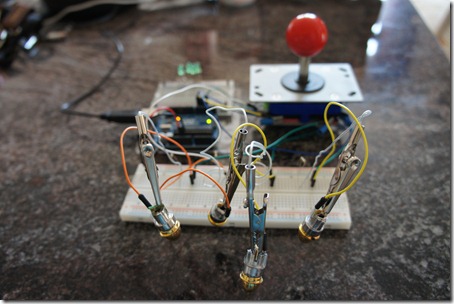 Here’s a top view, so you can see the breadboard: 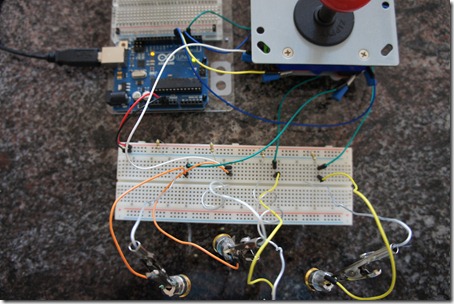 And here it is in action:


[I should be in Italy as this post is going live: as mentioned last week, I queued up a few posts prior to crossing the Alps for a few days. I'll be back in the saddle from Monday.]