« Installing an SSD in my MacBook Pro | Main | Heading home »

As I’ve tended to, in recent years (barring issues related to weather), I flew in from Geneva via Heathrow and arrived in Las Vegas on Saturday evening. The flight was full, and a good half of the people on the plane were destined for AU, it seemed: our travel system is meant to limit the number of Autodesk employees on the same flight – probably because we make too much noise when enough of us are put together (just kidding, of course – the limit is there but it’s related to the risk to the company in case of disaster) – but it seemed to have been relaxed for this flight.

I had a very nice surprise: the person sitting next to me turned out to be working for Foster + Partners (and happened to be related to my friend and colleague, Dr. Robert Aish), so we spent quite some time chatting about DesignScript and computational design in general.

A day of caffeine-assisted (and jetlag-inhibited) retail therapy at the Fashion Show Mall.

Monday was the annual ADN DevDay, attended by around 500 development partners. It was nice – and a little strange – to be there as an actual attendee, not having had anything at all to do with the preparations, now that I’ve changed roles within the company – but I did act as a judge at the APPHACK event on the Monday evening.

There were some great entries into the competition, so it made for a really fun start to the evening. The winner of the grand prize was Rob Oud from CAD & Company who happens to be an old friend (would you believe I helped train staff of his on the Autodesk WorkCenter API back in 1996? I’m feeling old…), so I was very happy to see he had won (fairly and squarely, I might add :-). 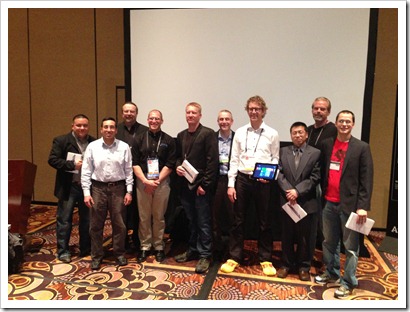 It was great to catch up with people afterwards at the ADN party at El Segundo Sol before hitting the hay in preparation for my extremely hectic Tuesday.

The day started with the AU keynote – which was impressive and inspiring, as usual, with some cool new cloud-based tools like FormIt and Fusion 360 announced – before my first class of the day: AutoCAD Programming Gurus Go Head to Head. This is a fun – but challenging – class: the premise is that the audience helps generate a list of 10 programming challenges they’d like to see addressed during the 90 minutes. These then get distributed between the panelists. Some end up being addressed by explanations, but others actually require coding. I tend to think of this as my Forrest Gump class, but it usually ends up going well. The topic I had that involved coding was related to jigging a solid – a frustum – which I’ll post the code for next week, once I’ve applied a liberal amount of polish

Next up was lunch, followed by my first lecture of the conference. Then a quick break, followed by my chairing a roundtable discussion on Cloud & Mobile technologies. In fact, I promised attendees I’d publish the notes I took from that class, so here they are:

After another quick break it was time for “AutoCAD – Meet the Experts”, another panel formed (this time) by Software Architects on the AutoCAD team (myself, Albert Szilvasy, Christer Janson and Ravi Krishnaswamy). A good session – and a nice way to end the day.

Then it was off to the Exhibit Hall for a few beers before dinner with members of the AutoCAD organization.

This is the last day of my AU experience, this year: I’m flying across to the Bay Area, this evening, as it seemed a shame to come all this way and not get to meet with colleagues there (and leaving before the 20th Anniversary Party – which I have no doubt will be a blast – means I can do so without spending another weekend away from home).

I’m now going to check out of the hotel and go to a couple of meetings with colleagues before delivering my last class of the conference and heading to the airport.

Please do stop me to say “Hi” if you get the chance – I have more time to chat, today, and my AU will soon be over for another year. Ah yes, and I’ll be manning THEbar from 11:30am-1:30pm, in case you want to swing by there.