I’m really excited about this. A new programming language and environment for AutoCAD is now available for download on Autodesk Labs (and here’s the announcement on Scott’s blog, in case, and you should also be aware of this login/download issue – something I just ran into myself).

Way back when, I helped integrate the initial incarnation of DesignScript – although at the time we were using its working name, D# – inside AutoCAD. The father of the language, Robert Aish, was put in touch with me on October 17th 2008 and by the time I headed for Las Vegas on November 30th we had a working prototype (which was good enough to demonstrate at the Design Computation Symposium and even to be included in a video shown during the AU 2008 mainstage presentation). It was quite an intense period, believe it or not.

Here’s an old screenshot for chuckles: It was a really interesting project: working with Robert was a great experience, and we managed to create a demo app that had its claws deeply into AutoCAD in many areas (aside from a nice UI-level integration, we made heavy use of transient graphics for performance purposes, for instance).

A lot has clearly happened since then: professional language designers have become involved in the project, creating a design-centric, multi-paradigm (which in this case means primarily associative and imperative) programming language. A team of coders have created a core implementation that works extensively with AutoCAD geometry (as opposed to the small number of types we delivered with the initial demo).

I’m really looking forward to taking this version of DesignScript for a spin and posting a few samples on this blog. While it’s ultimately a technology that’s targeted at problems that would benefit from algorithmic or computational design – and mostly in the AEC space – I suspect that it could also be used more broadly. We’ll see!

In the meantime, here’s a quick snapshot of DesignScript inside AutoCAD 2013 (you need to be running the 64-bit version to install the Labs release) with the script from “Tutorial 1” loaded and executed: 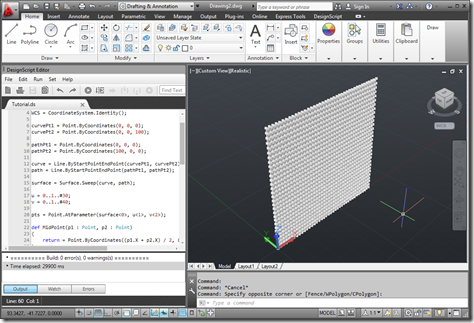