The topic of P/Invoke came up this morning in a discussion with Stephen Preston and Viru Aithal. Stephen mentioned a couple of interesting P/Invoke-related tools he’d stumbled upon, and Viru pointed me at an interesting technique he’d used for P/Invoking unmanaged member functions.

The first tool is the PInvoke Visual Studio Add-in from Red Gate Software (the UK-based provider of various development tools, including Reflector Pro). It appears to be a Visual Studio Add-in for VS2003 and 2005 (I can’t see an update for VS2008 or 2010, which also means I can’t try it). The tool provides simplified access to the excellent PInvoke.net website, to which I often refer when developing .NET apps. I don’t actually use that many P/Invoke statements that I feel I need an Add-In, though – which is perhaps why the add-in doesn’t appear to have been updated for more recent Visual Studio versions – but it seemed worth mentioning. 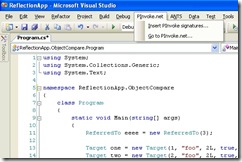 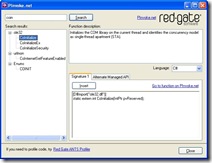 The second – in my opinion more interesting – tool is the P/Invoke Interop Assistant (here’s a more in-depth article, the CodePlex hosting site and a Channel 9 interview with one of the authors). This tool generates P/Invoke signatures for use from C# and VB.NET, as well as the ability to determine the P/Invoke signatures used in compiled binaries: 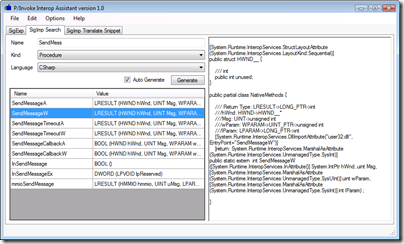 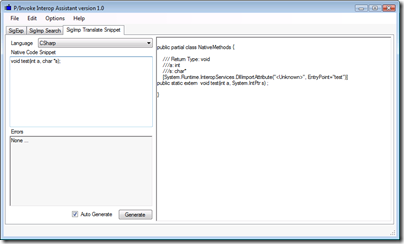 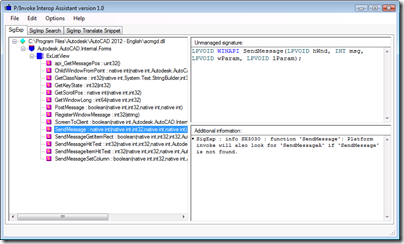 The tool has been around for a while, but I hope some of you find the information in this post useful (it was certainly news to me). Does anyone else use a P/Invoke tool they’d like to share with this blog’s readership?