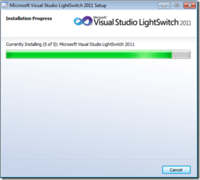 Just released: a streamlined version of Visual Studio focused on developing data-centric business applications. Visual Studio LightSwitch is basically a set of templates/Wizards and runtime components that help you build and deploy applications for creating, editing and querying business data. The tool either installs on top of VS2010 or presumably installs its own Visual Studio shell, if you don’t already have it installed (I do, although I’m guessing the target audience for this tool generally would not). From a runtime perspective, LightSwitch relies heavily on Silverlight, which it uses to provide a rich UI based on your data model... Read more →

Finally working with the Async CTP for VS 2010

I’ve been planning to look at it for ages – and have certainly mentioned it before – but other things have kept on cropping up. Well last Thursday, on my train trip back from Wallisellen (the home of Microsoft Switzerland), I finally managed to take the plunge and start working with the Async CTP for Visual Studio 2010. I’d been in Wallisellen to attend an MSDN TechTalk presentation by Stephen Toub, Principal Architect on Microsoft’s Parallel Computing Platform team. I’ve followed Stephen via his blog – and the Parallel Programming with .NET blog – for a long time, and... Read more →

A guide-line for Visual Studio

And yes, I do mean that literally. :-) Since starting this blog, 5 years ago – and even more in the last 2 years, since starting to develop and edit our Plugins of the Month for Autodesk Labs – I’ve been checking every line of code I’ve written to make sure it doesn’t exceed 70 characters in length (the magic number for fitting my blog’s width). It’s become close to automatic – in the sense I rarely write lines that exceed this length and therefore need adjusting – but the process I use is still quite manual: I check... Read more →

The topic of P/Invoke came up this morning in a discussion with Stephen Preston and Viru Aithal. Stephen mentioned a couple of interesting P/Invoke-related tools he’d stumbled upon, and Viru pointed me at an interesting technique he’d used for P/Invoking unmanaged member functions. In this post I’ll present the tools, in a later post I’ll show Viru’s code. The first tool is the PInvoke Visual Studio Add-in from Red Gate Software (the UK-based provider of various development tools, including Reflector Pro). It appears to be a Visual Studio Add-in for VS2003 and 2005 (I can’t see an update for... Read more → 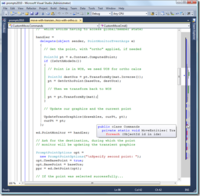 Despite having worked for some time with a number of language features previewed for VS2008 and properly released in VS2010 (F# being a prime example), I’ve finally gotten around to installing VS2010 as my main .NET code development environment. To make sure I could get code across properly into my blog, I was able to get my favourite source code copying tool, CopySourceAsHTML, working in Visual Studio 2010. And thanks to tips from Ewen Wallace and Scott McFarlane, I upgraded my use of RockScroll to switch across to AllMargins (which includes the particularly handy OverviewMargin tool, as seen at... Read more → 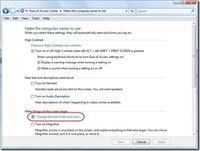 This topic isn’t at all specific to AutoCAD – in fact it was encountered by Adam Nagy with the recent Plugin of the Month he developed for Revit – but it seemed something people might hit. Thanks to Adam for proposing this topic and providing the information to share with everyone. :-) In recent versions of Windows – at least with Vista and Windows 7, but perhaps versions before that – it’s possible for the user to adjust DPI Scaling options on their system as part of the usability/accessibility options. This can cause issues with how your dialogs are... Read more →

Thanks for George Varghese and Albert Szilvasy from the AutoCAD Engineering team for this helpful tip (culled from an internal email discussion). If you’ve ever wondered how to reduce the noise AutoCAD makes in Visual Studio’s output window while debugging – at least since AutoCAD 2009, when we integrated WPF for user-interface components such as the ribbon – then this post will be of help to you. Here’s the window we’re talking about, which fills with messages from the application being debugged (in this case AutoCAD, whose acad.exe needs to be listed in the Debug properties under Start external... Read more →

Yesterday my two sons – who are now 6 and 4, both great ages – managed to get me to sit (several times, of course) on a whoopee cushion. Which brought back many fond memories of my brother and I playing similar tricks at around that age. What amazed me most was how the technology has advanced: this latest generation of cushion self-inflates! A simple enough innovation – the rubber now contains a small hole and a sponge – but in many ways revolutionary. Ah, if only I had a time machine I could make a small (but very... Read more →

In the first part in this series, we looked at getting our basic installer to install files and in the second part we focused on checking and modifying the Registry. In this part we’re going to finish up our installer by tweaking the user interface. Let’s get started with some fundamentals: the name of the MSI file itself. This can be modified via the Installer project’s property page (which I pulled up by right-clicking the project in the Solution Explorer and selecting “Properties”): A pretty simple one, but one that’s worth making, nonetheless. Let’s go ahead and spruce up... Read more → 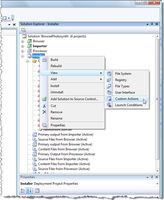 In the last post we created a basic installer to deploy our product files and source into a user-specified location. In this post we’ll look at the Registry-related activities that need to happen from our installer. One of the files we added to the install project was the RegDL executable. We’re going to add some custom actions which use this executable to create/remove our demand-loading Registry entries on install/uninstall. The advantage of this approach is that we don’t need to duplicate information in an installation script that’s already stored in our .NET assemblies: RegDL queries an assembly programmatically for... Read more → 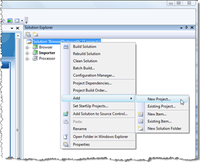 It’s been a long time since I’ve dabbled with software deployment technology, which is absolutely fine by me (in my experience installation issues are some of the gnarliest to deal with, so – presumably like the majority of developers, with apologies to Install specialists – I prefer not having to care about them, myself). But last week I had to put together a few installers - as an internal test - for some of our Plugins of the Month, and ended up deciding the process was worth documenting, especially where it relates to the RegDL component I created and... Read more →

Thanks to Kristine Middlemiss, from our DevTech Media & Entertainment team, for bringing this very cool application to my attention. There a few Visual Studio Add-Ins that I can no longer do without. I use CopySourceAsHtml for every blog post of mine that includes source code, and I’m now just beginning to form a similar dependency on RockScroll. This Add-In integrates with Visual Studio (in my case 2008, as I’m typically slow to install the latest & greatest VS release) to display a thumbnail view of your current source file in a fattened, still perfectly functional scrollbar: This tool... Read more →

This question has popped up a few times since Visual Studio 2010’s recent launch. I received it by email overnight from Roland Cox, which is interesting as I’d already planned this post for today. Do you know how to debug AutoCAD and a custom add in using Visual Studio 2010? What settings do I need to make? I know the add is getting loaded (the code runs in AutoCAD) but I can't set a breakpoint (it shows a empty circle saying that VS doesn't have the assembly loaded). I first saw this issue raised a few times on threads... Read more →

This is a minor pet peeve of mine that I felt like sharing. Feel free to post a comment if you agree, disagree or have your own pet coding peeve to share with other readers of this blog. I quite often see .NET code that tests for the value of a Boolean to see whether it’s true or false: if (booleanVariable == true) { … } or If isBooleanFunction() = False Then … End If Now while not strictly incorrect, this style is, at least, redundant: a Boolean is by nature true or false, and testing for equality with... Read more →

In the first post in this series we looked at the basic (and free) capabilities of the upcoming version 6 of .NET Reflector. Today we’ll look at the “Pro” capabilities, which integrate decompilation with debugging of 3rd party assemblies. To get started, we should see a new “.NET Reflector” toolbar inside our Visual Studio installation. On it, we should see a “Choose Assemblies to Debug…” option: This option launches an analysis of our currently open solution, to understand the assemblies that have been referenced inside it: One very important thing to note: for Reflector to work, you must have... Read more → 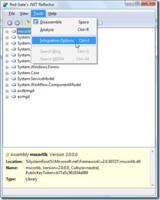 As many of you will know, by now, I’m a big fan of Reflector. I’ve used it for quite some time, since its early days as a piece of freeware developed by Lutz Roeder, and overall it’s proven to be an extremely valuable tool. When a UK-based company, Red Gate Software, acquired the Reflector technology back in 2008, I was curious as to their strategy for monetizing it (and it seems I wasn’t alone in speculating on the direction the tool would take as a commercial offering). Well, that’s now starting to become clear with the Beta release of... Read more → 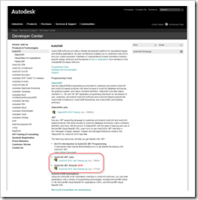 As mentioned a few months ago, we’ve been working on a project wizard for AutoCAD .NET development. The official version of this tool is now available via the AutoCAD Developer Center (a direct link to the download can be found here). We incorporated a number of enhancement requests received from people working with the previous, draft version, but I don’t have an exhaustive list of the updates, unfortunately. If you provided feedback, thank you for taking the time to do so, and hopefully the issue you faced has been addressed in this updated version (and please do let us... Read more →

Converting between C# and VB.NET

While I’m a huge fan of learning and using different programming languages – whether to train your brain to consider different potential solutions to a problem or to improve your job security and your ability to roll with the punches as the employment & technology landscapes shift – you will no doubt have noticed that the vast majority of my posts contain C# code. A lot of my early programming (both work and fun) was in BASIC (whether BBC BASIC, Level II BASIC on the TRS-80 or GW-BASIC) and some of the more involved internal projects I’ve worked on... Read more →

While not necessarily relevant when working with AutoCAD data, it’s very common for people to want to make use of adjacent database systems when developing AutoCAD applications. For just this reason I’ve been meaning to post something on LINQ (and, in due course, PLINQ), but for now I recommend checking out this guest post from Joel Karr over on Jeremy Tammik’s The Building Coder. Thanks for the tip, Jeremy! :-) Read more →

Migrating your application to work with AutoCAD 2010

This post looks at the basic steps required to prepare your application to work with AutoCAD 2010. I've copied the information from the recently-published Platform Technologies Customization Newsletter, a quarterly newsletter available to ADN members. A big thank you to Stephen Preston, Fenton Webb and Gopinath Taget for putting the material together. AutoCAD 2010 software release marks the end of a binary compatibility cycle. Remember the migration from AutoCAD 2004/5/6 to AutoCAD 2007? Don’t worry – this time is a lot easier. And now you have another three years of compatibility to look forward to. The major migration issues... Read more →