As promised in the last post, today we’re going to see the adjusted point cloud import workflow applied to the previously posted Kinect integration samples. This was also an opportunity to look at the improvements in version 1.5 of the Kinect for Windows SDK. When the SDK was announced, my initial reaction was “OK, but what we really need is finger-tracking”, especially as it was right around the time Leap Motion made their big announcement. But there have nonetheless been some really interesting capabilities added to the Kinect SDK with version 1.5: Seated mode skeletal tracking You can choose... Read more → 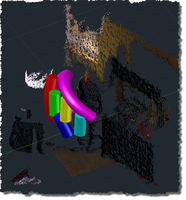 Ah, the joys of jetlag. After getting up with jetlag at 3am, yesterday, I finally worked out what was wrong with my inconsistently performing speech recognition approach shown in this previous post. I tracked down this helpful piece of advice on the Microsoft forums, which explained that the Kinect Audio capability really needs to be initialized on a MTA (multi-threaded apartment) thread. Moving the relevant initialization to a function marked with the [MTAThread] attribute and then spawning a thread to execute it made all the difference – the code now behaves predictable and effectively. I added a few more... Read more →

Yesterday evening, I had a nice chat by phone with a local development partner, here in Switzerland. I’m meeting with a member of his development team, next week, and we were establishing a way of us identifying one another at the train station. Rather than offering to wear a pink carnation, I suggested the visitor check the photo on my blog before coming. The developer – who had seen me in person, before – suggested it might be helpful if he mentioned to his colleague that I was “short and bald”… I’m apparently shorter than he’d initially expected –... Read more →

As promised, here’s my handout for CP3840, the main class I’m teaching at this year’s AU. Introducing Kinect Since Kinect for Xbox 360® was launched on November 4th, 2010, the device has taken the world by storm: it became the quickest selling consumer electronics device ever (according to the Guinness Book of World Records), selling 8 million units in the first 60 days. This record has since been surpassed, but still. Kinect was originally intended to be a controller for the Xbox 360 gaming system – allowing you to play games without a controller, or, as Microsoft like to... Read more →

This post follows on from this recent post which showed a flat port of the previous OpenNI/NITE code which swept a single solid along a spline path defined by the user being tracked by the Kinect device. As mentioned, the previous approach was ultimately flawed, as adding vertices to our spline path made the whole thing problematic (as the sweep operation became less and less likely to succeed). The updated code adopts a slightly different approach: it creates the solid in segments, creating a new segment whenever there’s an error encountered or when the current segment exceeds a certain... Read more →

After using the Microsoft Kinect SDK to bring point clouds into AutoCAD and then to track skeleton information, I’m happy to report that I now have an equivalent implementation of this previous post, where we used OpenNI and NITE to understand gestures captured by the Kinect and draw 3D polylines inside AutoCAD. This implementation is a bit different from the last, mainly in that – given the additional calculation needed to map points into “skeleton space” when building out point cloud – I no longer transform all the points and then select a sampling. This implementation passes a sampling... Read more →

To follow on from my post showing how to get point cloud information from Kinect into AutoCAD – using Microsoft’s official SDK – this post looks at getting skeleton information inside AutoCAD. The code in today’s post extends the last – although I won’t go ahead and denote the specific lines that have changed – by registering an additional callback called by the Microsoft runtime which, in turn, stores data in memory to be displayed when the jig’s WorldDraw() is next called inside AutoCAD. The main thing to note is what’s needed to map the skeleton information into AutoCAD’s... Read more → 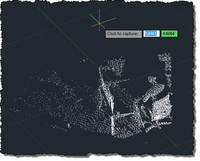 As mentioned, last week, I’ve been working away to port my previous OpenNI/NITE AutoCAD-Kinect integration across to the official (although still in Beta) Microsoft Kinect SDK. Today’s post presents a very basic implementation – essentially equivalent to the code in this previous post – which makes use of the Microsoft Kinect SDK to bring a colourised point cloud into AutoCAD. As in the previous post, the txt2las tool is still currently needed to bring the generated point cloud into AutoCAD. It’s worth noting that the Microsoft SDK is a) much simpler to install/deploy and b) provides more reliable colourisation... Read more →

After focusing on a manual process for sweeping a solid inside AutoCAD in this previous post, it seemed to make sense to attempt to automate more of that process. In the code in this post, we take a standard circular profile – of a user-specified radius – and sweep it along the path defined by the user’s hand movements. Back in the original Kinect integration example we created a 3D polyline path linking every position of the user’s hand detected by Kinect. This makes a very jittery path for our purposes, so we’re going to define a spline along... Read more →

I suspect that many of you who have worked with point clouds will have come across this issue: the standard CIRCLE command in AutoCAD will create the circle on the plane of the active User Coordinate System (UCS), even when the circle is defined by three points on its circumference. This behaviour is probably fine for the majority of 2D drafting activities, but if you want to create circles from a point cloud – by selecting points from its perimeter using the Node object snap – then it’s less than ideal. The code in today’s post implements a very... Read more →

Over the weekend, I had more fun exploring the use of Kinect with AutoCAD. It was prompted by an email I had from a UK-based creative team who are interested in the potential of capturing time-lapse point clouds using Kinect. They were curious whether the quality of data coming from the Kinect device would be adequate for doing some interesting trompe l’oeil video compositions. I started by taking the code from last week’s Kinect post: I removed the code related to gesture detection and beefed up the point-cloud related implementation to deal with composite point clouds that are built... Read more →

I’ve improved the basic implementation in this previous post pretty significantly over the last week: New ability to draw multiple polylines Added a gesture of lowering/raising the left hand to start/finish drawing with the right Addition of a transient sphere as a 3D cursor for polyline drawing Quick flash of a transient skeleton (arms and chest only) on user detection The jig now perpetuates by changing the screen cursor minutely to and fro Mouse input is needed to keep the jig active; Kinect input doesn’t yet count :-) A new gesture of placing hands together to end drawing At... Read more →

As promised in this previous post, I’ve been playing around with understanding Kinect gestures inside AutoCAD. My first step – after upgrading the OpenNI modules and drivers to more recent versions, which always seems time-consuming, for some reason – was to work out how to get gesture information via nKinect. It turned out to be very straightforward – as it’s based on OpenNI and NITE, the user-tracking and gesture detection come pretty much for free. A few things I had to work out: We needed a “skeleton callback”, which is called when body movements are detected Because this is... Read more → 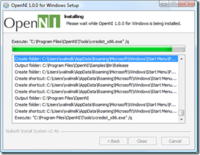 Now things are getting interesting. :-) It took me some effort to get this working, but looking at the results I think it was worth it. As mentioned in the last post, I’ve been trying to get a live feed from the Kinect sensor to display dynamically inside AutoCAD. This post shows how to do that. A huge thanks to Boris Scheiman for helping me get to this point: he not only extended his nKinect implementation to generate the point cloud data I asked for, he sent a number of emails explaining (and even providing) the various modules needed... Read more →

This question came in a few weeks ago, which I thought worth addressing: Hi, Kean! I have a question - how can we create hatch during jig? The code in this post endeavours to do just that, but – be warned – isn’t fully successful. The problem I chose to interpret this as is “how do you jig the creation of a polyline, using it as the boundary for an associative hatch?”, and it’s not an easy one to solve. I started by taking Philippe Leefsma’s code from this previous post, which jigs a polyline (including arc segments). I... Read more →

Following on from these two posts, we’re now going to implement a jig to create our QR Code raster images inside AutoCAD. Today’s approach isn’t radically different from the previous one prompting selection of corners, but we do get to see the actual (square) boundary of the raster object as it gets defined. It would have been even better if the raster contents were displayed during the jig, but from what I can tell this has been disabled deliberately, no doubt for performance reasons (you see the same effect – only having the boundary visible – when you move... Read more →

First we saw some simple code to create a pretty multi-line text object, then we saw some code to place it using a “drag jig”, now we’re going to launch AutoCAD’s In-Place Editor (IPE) for MText once the object has been placed. To do this we’re going to make use of the InplaceTextEditor object added to the Autodesk.AutoCAD.ApplicationServices namespace in AutoCAD 2011. There’s very little work needed to do this – I had concerns about whether it could work safely with a newly-created, transaction-resident object, but it seems to work very well, as far as I can tell. Here’s... Read more →

In the last post we created a simple MText object containing sections of text with different colours. The object was located at a hard-coded location, so now we want to use a simple technique to allow placement of our MText (or any object, for that matter) in the current user coordinate system. Rather than implementing a full jig class – whether a DrawJig or an EntityJig (the latter being most appropriate for this scenario) – we’re going to use the .NET equivalent of the old (draggen) or acedDragGen() functionality: the overload of Editor.Drag() which takes a selection set, prompt... Read more →

May’s Plugin of the Month: Spiro for AutoCAD 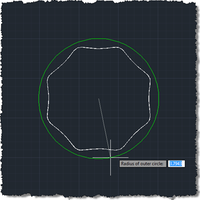 This one is a bit of an experiment: our first “fun” Plugin of the Month (fun in that it doesn’t serve a serious work-related purpose that I can think of :-). I’ve post earlier versions of the code to this blog, but thought I’d post and share the latest & greatest. Scott has kindly announced the plugin’s availability already over on It’s Alive in the Lab. This is our first Plugin on the Month written in F#, which means an additional DLL needs to be copied with the plugin itself. Other than that the application should work just as... Read more →