This is my first week back after a lovely 10-day trip to Italy, most of which we spent scuba diving on the beautiful island of Sardinia.

We’d planned this trip some time ago, but that didn’t mean it was without its worries: between last-minute doctor’s visits for medical certificates (not strictly required for scuba diving, but it’s generally a good idea to have them) and fast antigen tests for the (so far unvaccinated) kids, there were more logistics to think about than usual. We also needed to check a couple of suitcases – which were basically full of neoprene – through to Alghero airport – our trip’s destination – but as we only had “light” fares, and had bought them through a low-cost operator in the UK, even adding those to our itinerary was a pain. Oh, and then our airline – Alitalia – finally went bankrupt on us, and by pure chance it turned out we’d be returning on the last ever day they would fly planes. Sigh.

Anyway, despite the undercurrent of low-grade anxiety, everything ended up going smoothly. 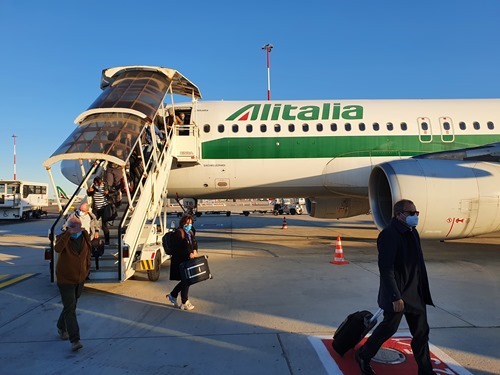 As the best route would take us via Rome (direct flights between Geneva and Alghero stop for the winter months) we thought we’d use the 9-hour layover on the way out to visit the Vatican museum. One of our sons had recently completed a school project on the Sistine Chapel, so was thrilled when we told him we’d booked a tour.

Our Geneva-Rome flight was slightly delayed, but not by much: we managed to find the left-luggage depot for our carry-ons and then jump into a taxi for the city centre. We even found a nice-looking café near the tour’s meeting point where we could have a quick panino and a drink before it all started. 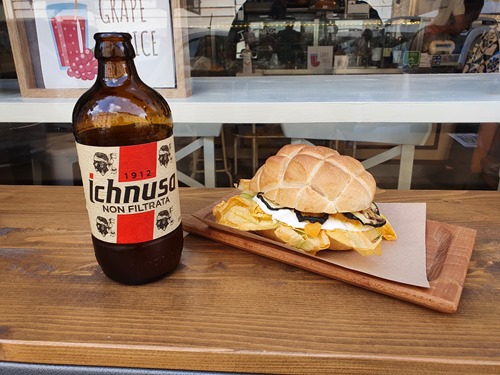 (I didn’t realise at the time that Ichnusa was a Sardinian beer: it was an appropriate way to start the trip, though!)

It was a nice day in Rome, whether inside or outside. 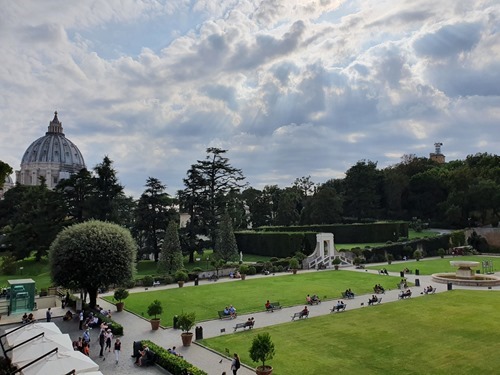 The tour of the Vatican museum was simply jaw-dropping. We weren’t allowed to take pictures in the Sistine Chapel, itself, but there were many other rooms that were also incredibly beautiful. 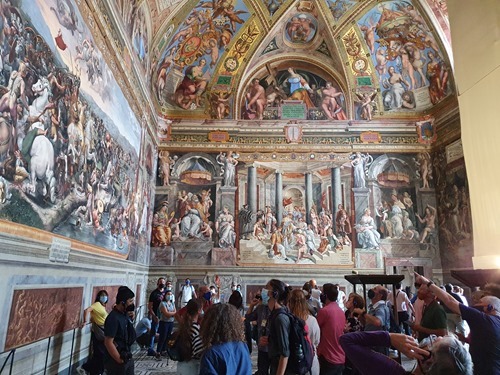 The stairs to the museum were apparently inspired by the Guggenheim in New York. 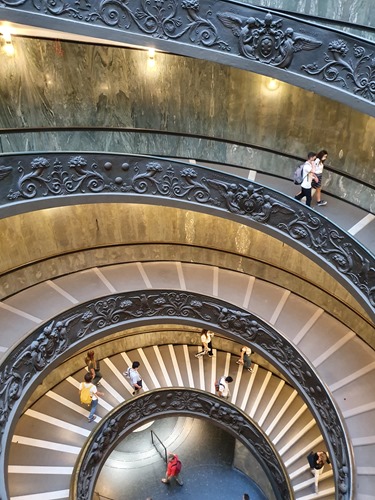 By the time we arrived in Alghero it was nearly midnight, so we didn’t see much on the way to the diving centre.

We didn’t dive the first day in Sardinia: we decided to head into Alghero by bus (we opted not to have a rental car, as we knew we’d mostly be diving) to get some provisions. The rest of our stay had a distinct pattern, though, which I’ll try to describe below.

We’d wake up at 7am and have a light breakfast, then head towards the boat. On clear days the sun would be poking through. 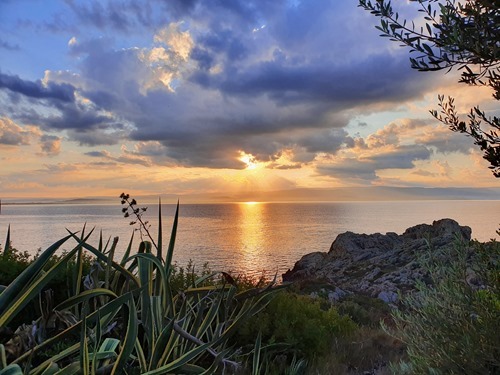 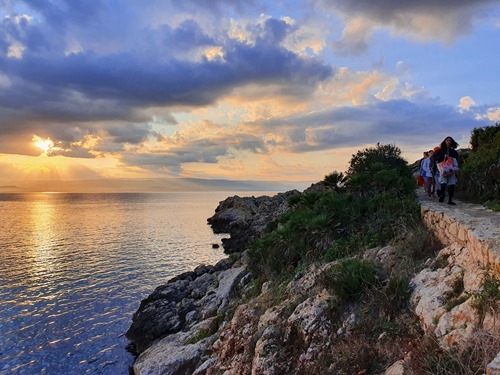 Our equipment would all be lowered down by cart, which was very handy. 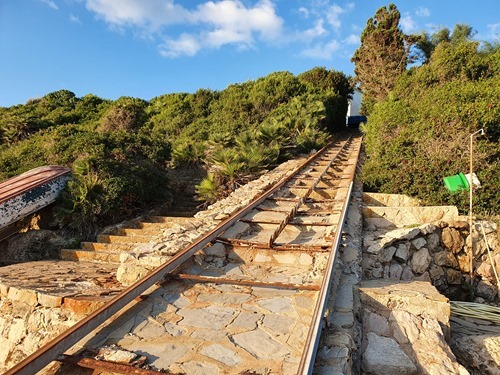 We still had to load (and later unload) the boat, which we did by forming a human chain. 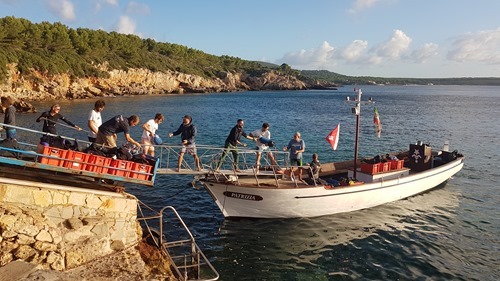 It usually took about 30-40 minutes to get to the first dive site. These were always close to the most incredible cliffs. 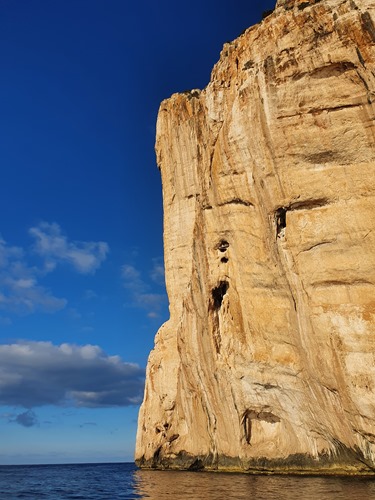 We’d get ready on the boat, and then fall backwards into the water. 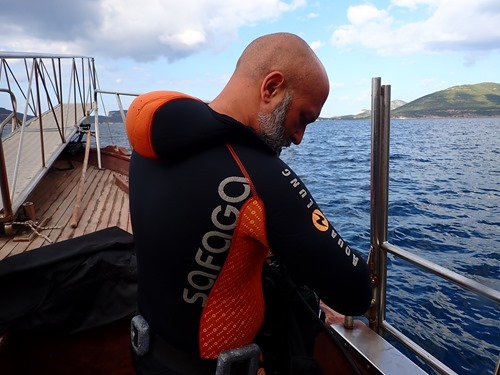 It was absolutely fantastic to all dive as a family. I was so impressed with how well my kids dive (I’m utterly inelegant by comparison, but anyway). 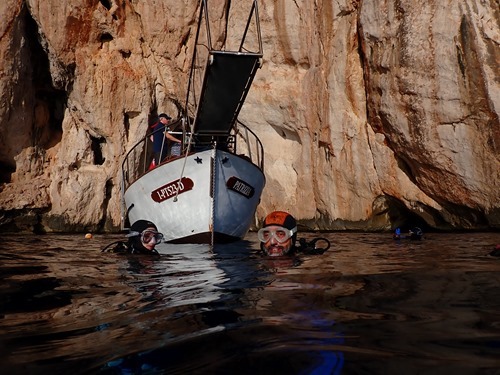 Our youngest two took their Advanced Open Water during our stay, so everyone’s now qualified for more challenging dives. 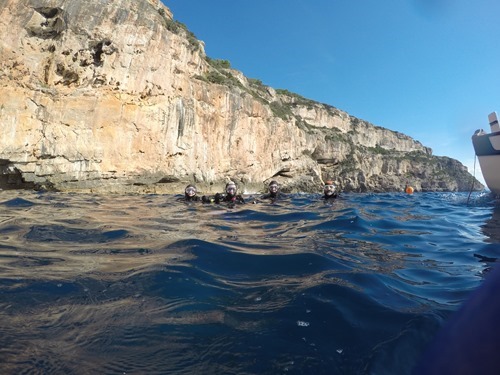 All the sites max’ed out at a depth of about 25m, so there was close to no risk of decompression-related issues. 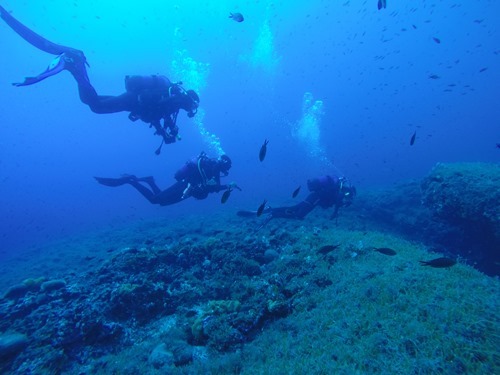 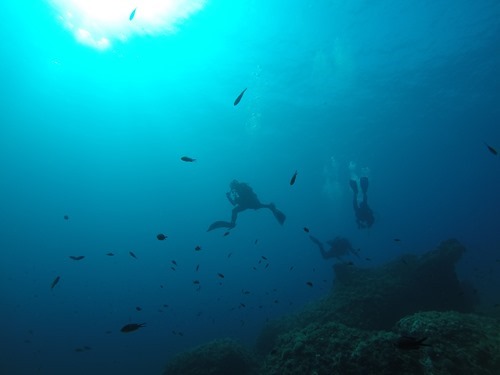 We enjoyed all the dives we did, but some of the more memorable ones were in the local system of caverns (not caves, as there were generally windows onto the open sea). 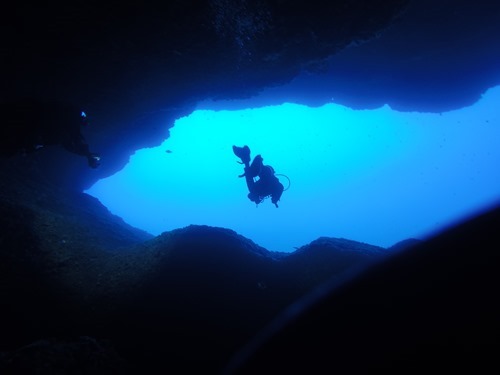 There were even internal lakes you could climb out and walk to. (We didn’t, but we saw one internal lake after surfacing in a nearby air pocket.) 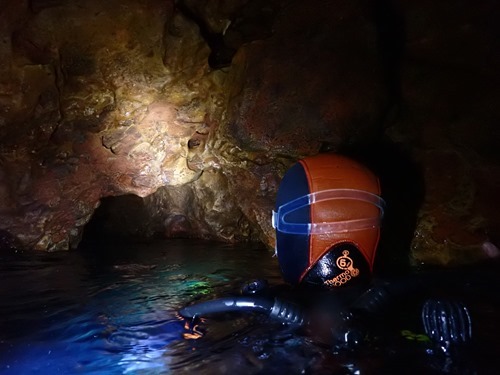 We saw some fantastic sights – here’s a shoal of barracuda: 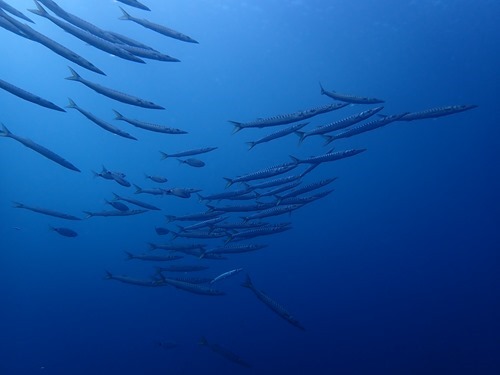 Here’s another with a few tuna joining them: 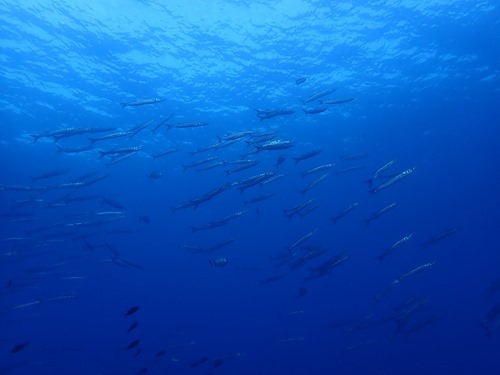 Our eldest son was experimenting with his underwater camera. The following shots (and many of the above ones) are all his: 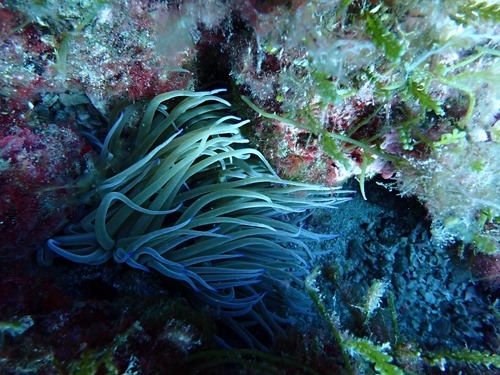 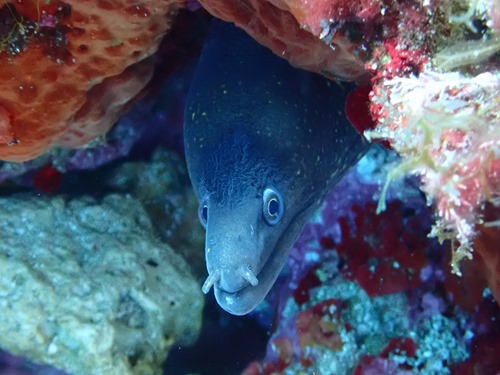 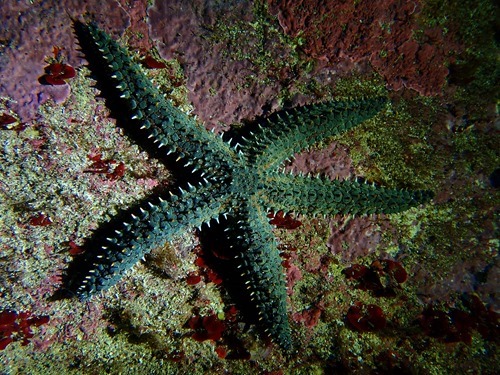 After the first dive we’d have a cup of hot tea and a few biscuits back on the boat before heading to the next site. The boat would often go back out for a single dive in the afternoon, but we stuck with our routine of two morning dives.

We’d then head back to the diving centre for a plate of pasta and a beer, after which we’d either nap or go for a walk. 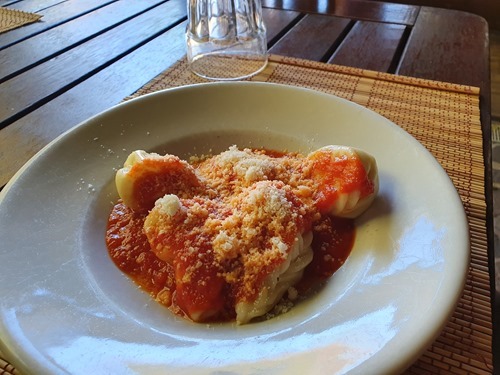 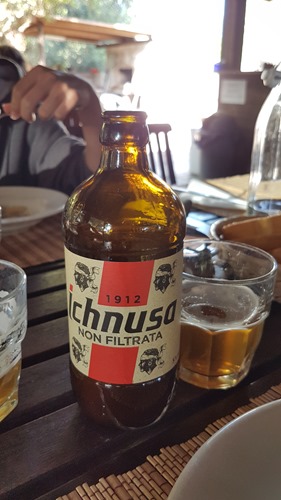 Our evenings consisted of an “aperitivo” overlooking the Mediterranean, following by dinner back at our apartment.

We followed this basic rhythm for 7 days (some of us took a break on the fourth day), and it was incredibly relaxing. I ended up nearly completely ignoring AU2021: mobile reception in the area was really poor. I did join this one class as a silent panelist – just in case there were any questions about Project Dasher that I could handle via chat, as the Forge team kindly chose to demo it during the session – but I was very happy that I could just stay silent.

On the last day before leaving we took it easy, once again – it’s good to leave 24 hours after diving before taking the plane, even if the dives are shallow – which included heading to the local town to get the kids tested for the return trip, and raiding the town’s ATM for Euros. (We could pay for the accommodation by bank transfer, but the dives had to be paid in cash… and 7 days of diving for 5 people – plus a couple of training courses – meant quite a lot of it, too, especially when the ATM was only dispensing 20 Euro notes.)

Many thanks to the whole team at Capo Galera. I was really impressed with the warmth and professionalism we were greeted with. I wouldn’t hesitate to go back there for a diving holiday in the future! And many thanks to our dear friend, neighbour and former Autodesker, Iris Weiskopf, for discovering this fantastic part of the world and introducing us to it. Next time I hope we can all go together. :-)

Here’s a photo of some of our wonderful instructors. From left to right: Alessandro, Ricardo, Andreone and Andreino. Giulia and Lapo weren’t on the boat for this picture, but we also had great dives with them. 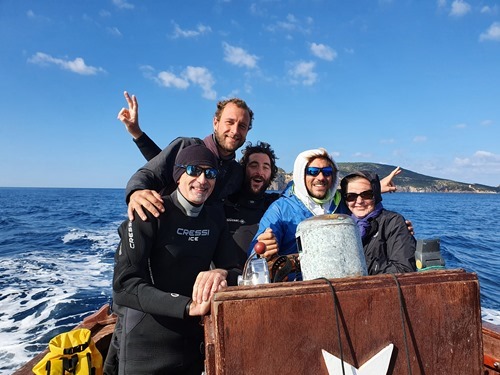 After an amazing holiday, we headed to the airport to fly – once again via Rome – back to Geneva. 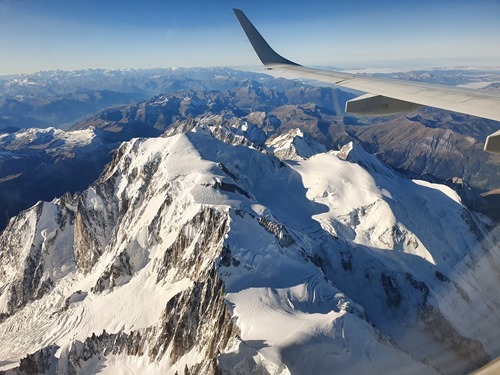 This time we had a very tight connection, so unsurprisingly our luggage stayed overnight in Rome. So while we were on Alitalia’s last flight from Rome to Geneva, our luggage came the next day on ITA’s first one.