« An update from Amsterdam | Main | Lowering the MX3D bridge »

In this week’s episode we play four classic Commodore 64 games. Tetris needs no introduction, of course, while we then went on to play a horizontal shooter called Delta followed by what may have been the “goriest game of the 80s”: Deathwish III. We wrapped up with a quick play of a racing game called Buggy Boy.

All in all it was a fun episode, once again. That said, I was really a bit shocked at the amount of blood shown in Deathwish III. Here’s its Zzap!64 review from September 1987: 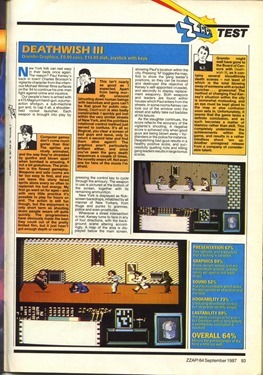 Today is my last day in Amsterdam – I recorded this last week, as I knew I wouldn’t be home in time. I’ll be sure to deliver a fresh episode of Floppy Friday next week, as usual.