These are busy times in the world of digital twins at Autodesk!

I'm thrilled to see the news that Autodesk Tandem has now officially launched. Head on over to the new landing page, intandem.autodesk.com, to find out more, or check out Bob Bray’s recent article. 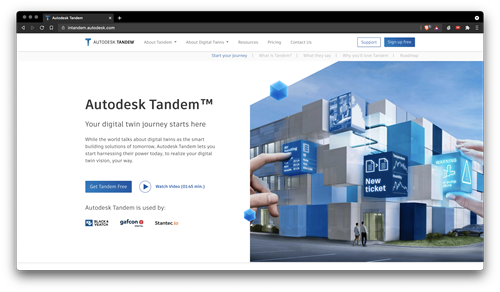 A few people have either been congratulating me or asking how this relates to Project Dasher, so I think it's worth clarifying the situation.

Tandem is not Dasher, although I'd love to think that the Dasher story at least in some way influenced or inspired Tandem's trajectory. Tandem solves a fundamental industry problem that we totally ignored (or more accurately chose not to worry about) when building Dasher: how to take BIM from the earlier stages of the building lifecycle through to operations without recreating costly, as-built models. The Dasher team’s answer to this question has typically been "recreate a costly, as-built model!", which just isn't scalable (or even the right answer outside of Research).

So Tandem fills a very important gap in the workflow of building and maintaining digital twins, and I believe will really help this type of implementation to become more viable and more broadly accessible.

What about IoT, and connecting in sensor data? While Tandem doesn't have Dasher's IoT-centric feature-set today, the team is planning on building out such features in a way that makes sense for their customers. I'm hoping that will end up looking a lot like Dasher, but we'll see: a lot depends on what they hear from their customers.

I do expect that Tandem will become a great solution for someone wanting Dasher-like capabilities. Not today, but at some point in the (hopefully) not-too-distant future. So adopting Tandem is likely to be a great first step along the path to working with real-world performance data captured from buildings.

If your need is more urgent (i.e. in the next 6 months or so), then you can always build your own Dasher-like tool using the Forge viewer's Data Visualization extension (Project Hyperion). This is quite likely how the Tandem team will build out their own capability, but, again, we'll see what makes most sense for them.

One interesting thought is about what happens when Tandem exposes its own platform features via Forge: this would, for instance, allow people to combine Tandem with Hyperion (something we plan on testing out with Dasher) to build IoT-powered digital twins that wed the power of Tandem’s model management with the beauty of Dasher’s (now Hyperion’s) data visualization. This is going to be super-cool, as people become able to address the needs of more niche digital twin markets with some really powerful technology.

While Tandem doesn’t currently have platform capabilities available, we are working closely with the Tandem team on the Living Lab we’re building in Autodesk’s Toronto office. We’ll for sure be using this project to explore connection points between Tandem and Hyperion/Dasher. 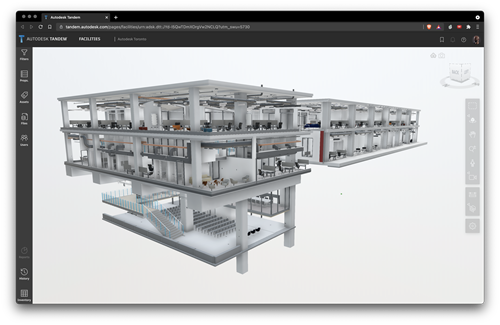 In the meantime, a huge congratulations to the whole Tandem team for this major milestone of delivering this exciting new product. I’m really looking forward to hearing what people think of it!