This week’s Floppy Friday is all about Indiana Jones games. Well, two of them, anyway. First we look at Indiana Jones in the Lost Kingdom from 1985 and then we play Indiana Jones and the Last Crusade – The Action Game from 1989. They’re very different games, which I’m sure you’ll see from this episode.

I think I’ve managed to fix the focus-related issue from last week (this happened when there was a major change in luminosity with the screen), so hopefully that’s better. Feedback welcome!

I’ve also made some progress with repairing the second of my two “breadbin” C64 machines: I received a new (old stock) VIC-II chip from China, and it means the system can now basically run a game, albeit without any video output: it’s quite typical to try a cartridge game called Kickman, as it bypasses some of the chips in the C64 which makes it more likely to work in the case of an internal hardware failure.

I posted what I’d found on the Lemon 64 forum, and someone kindly replied with the clue that the remaining problem is likely to be with the RF modulator. They suggested I have a look inside and squirt some contact cleaner (and I’m happy to have gotten hold of some DeoxIT, which is apparently the gold standard in that regard).

When I looked inside the RF modulator – which involved peeling back a solder-connected metal lid – I found an interesting surprise: a loose screw had found its way in, and was almost certainly guilty of shorting out some of the electronic components. 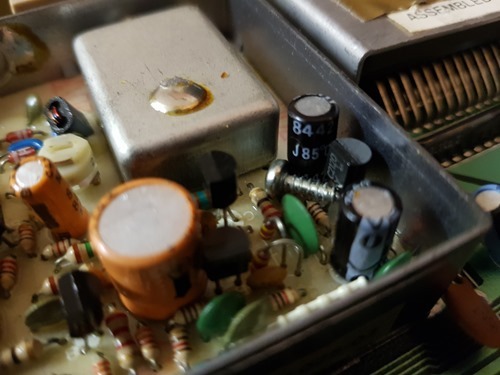 Ha! Removing it didn’t fix the problem, but it certainly explains what may have caused the computer to fail. I’ve gone ahead and ordered an RF replacement module, which I’m hoping will help me get this particular system up and running. We’ll see!