The MX3D bridge on Quarantime

My friend and incredibly inspiring former colleague, Mickey McManus, has been co-hosting a regular (I want to say weekly) live-streamed event under the name of Quarantime. They’ve just posted the 51st episode (which means they must be doing this more than once per week) which featured another friend and current colleague, Alec Shuldiner.

Alec has been the real workhorse driving forward the MX3D Smart Bridge project and Autodesk’s involvement in it. He joined Quarantime to talk about the project in the context of our cities’ future digital infrastructure. Here’s a snapshot with Project Dasher as a backdrop: 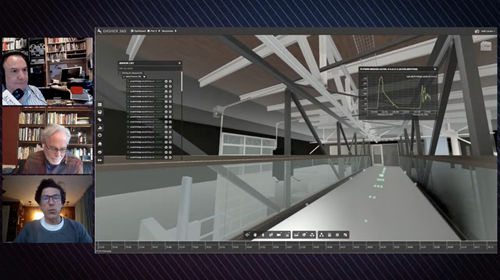 It’s really a super-interesting discussion – both in terms of the inside information on the MX3D project but also the potential (both good and bad) of smart infrastructure. Here’s the video itself:

Quarantime is one of those hidden gems that I would recommend watching regularly (a bit like Floppy Fridays, ahem). It doesn’t seem to have a huge viewership (it almost certainly has more than Floppy Fridays ;-) but the guests that have been invited – and the hosts, Peter and Mickey – are amazing. I really enjoyed seeing yet another former colleague, Andrew Hessel, joined by legendary VC Steve Jurvetson in episode 33, and then some more recent episodes relating to digital twins – episode 46 and episode 48 – were really interesting, too.

As you may have seen at the end of the episode with Alec, the installation of the MX3D bridge has been (further) delayed for at least a few more months. I’ll be sharing more on the project as the installation gets closer.