Our children have been off school for the last two weeks, so I’ve been alternating between preparing my Autodesk University 2020 material and going on excursions with the family.

We had planned to visit Kosovo during this break, but as it was on Switzerland’s quarantine list we chose to cancel our flights. Somewhat frustratingly – just the week after – the Swiss Confederation added 15 new countries to the quarantine list and removed only one: Kosovo. So we could have gone, after all. Argh.

That said, when we’d planned the trip back in July, I hadn’t realised the timeframe for material preparation for this year’s fully digital AU: everything needs to be finalised and submitted before October 20th. So these two weeks would have been very difficult for me to be offline… cancelling and doing small trips has worked out much better from that perspective. We’re also seeing a significant rise in cases in Switzerland, right now, so it also doesn’t feel very responsible to be travelling through airports. All things considered I don’t regret us staying home.

As I’m basically done with AU prep, now – I’ve uploaded my class recording, and just need to wrap up the handout before next week’s deadline – I thought I’d share a couple of trips we’ve done over the last fortnight.

The first was one we’ve been meaning to do for a while. We often drive past the turning for Kiental (the suffix “tal” means “valley” in German) when we’re heading up to ski in the Bernese Oberland: we regularly make the joke that it must be beautiful because it’s named after me (haha). Anyway, this holiday we finally chose to check whether this was true (spoiler: it was!). 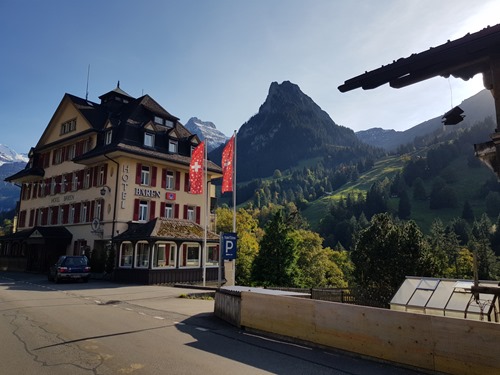 The village named Kiental is very picturesque, in itself. Our plan was to head to the end of the valley and then take the PostBus up one of the steepest roads in Europe to Griesalp. 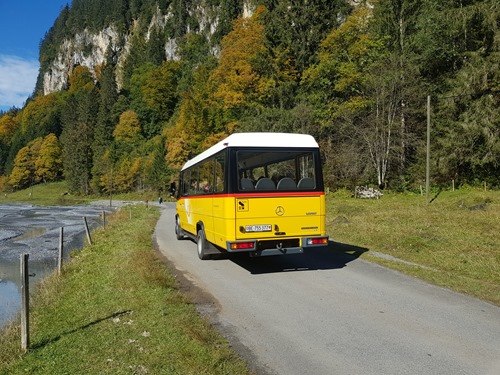 PostBuses are an institution in Switzerland: they often go places that other modes of transport do not. This particular road has a 28% gradient in places, so we opted to park up and spend a few CHF on the bus rather than dealing with the slightly hairy turns ourselves. 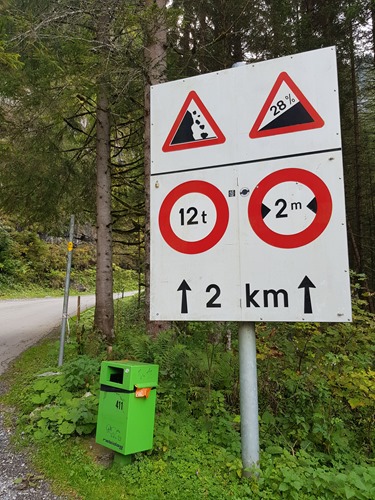 As the bus approached blind corners, the driver used the distinctive three-tone horn to announce our presence. It turns out the horn’s notes are taken from the opening notes of the William Tell Overture. You have to love this country! 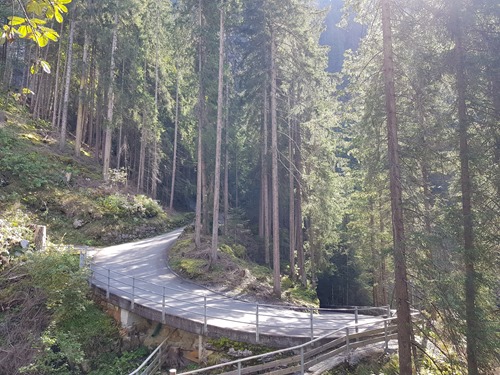 On arriving at the top, at Griesalp, we had a brief wander around and a simple picnic before embarking on our walk back down. 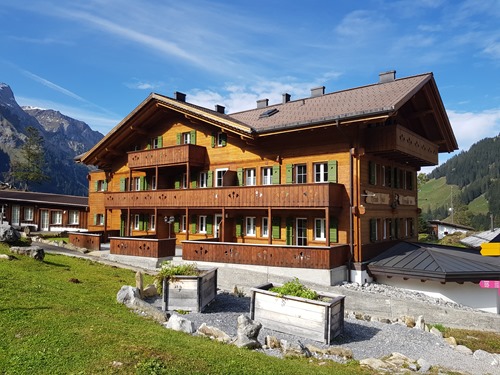 The walk down is really impressive (but very safe). We saw a number of waterfalls, on the way, the most impressive being the Pochenfall.

Even the less impressive falls were stunning.

We were regularly afforded lovely views down the Kiental across the Tschingelsee delta. 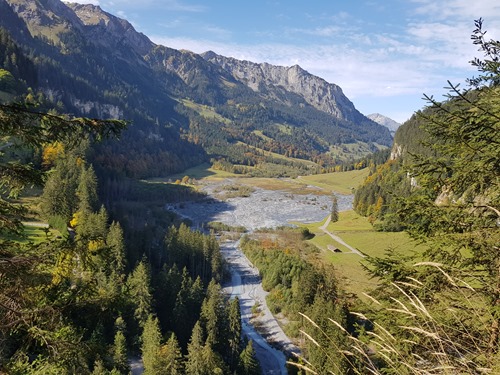 The views back upstream were none too shabby, either. 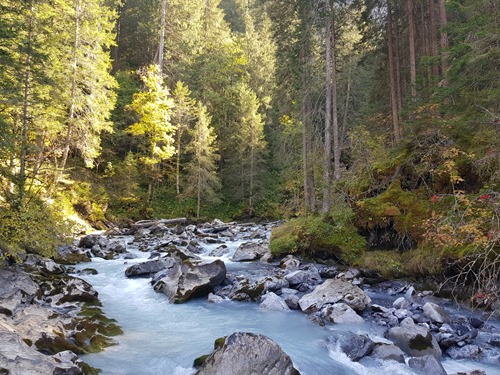 Here’s a quick panorama I took as we drove back down the Kiental. A lovely excursion!

The next trip I wanted to mention was yesterday’s visit to experience la Collection de l’Art Brut in Lausanne. It’s not a high-profile museum but has been visited by many influential artists, over the years, whether Peter Gabriel in the 1980s or Thom Yorke and his fellow bandmembers from Radiohead in the 2000s.

Despite the ongoing pandemic, the museum is open to the public but has a limit of 60 visitors at a time with mandatory mask-wearing, of course. We arrived soon after it opened and so had the place to ourselves for some time. 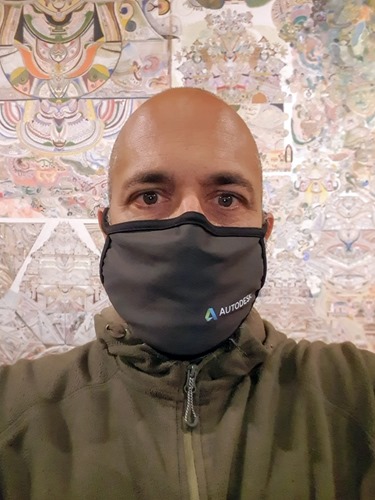 The French term “art brut” literally means “raw art” but is usually translated as outsider art. According to Wikipedia, this is defined as:

Outsider art is art by self-taught or naïve art makers. Typically, those labeled as outsider artists have little or no contact with the mainstream art world or art institutions. In many cases, their work is discovered only after their deaths. Often, outsider art illustrates extreme mental states, unconventional ideas, or elaborate fantasy worlds.

Here’s the definition at the entrance of the museum: 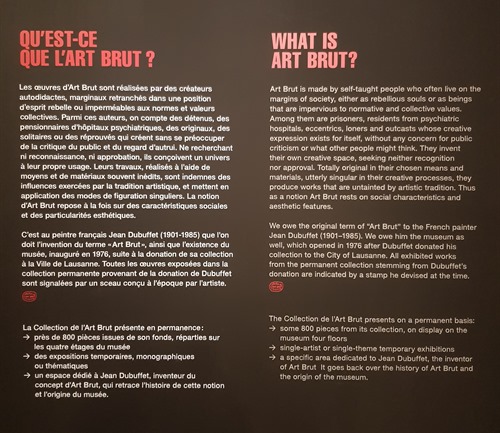 For me the words that stand out are that it is “creative expression [that] exists for itself, without concern for public criticism or what people think. Totally original in their chosen means and materials, utterly singular in their creative processes, they [the artists] produce works that are untainted by artistic tradition”.

I admit that I was expecting something much darker, overall: while some did reveal somewhat dark impulses on the part of the artist, others were even whimsical.

For each of the artists whose art was on display there was a brief bio that described their background and circumstances. These were really interesting and definitely increased our appreciation of the art itself.

There were many drawings that you could tell had helped the artist deal with their situations. 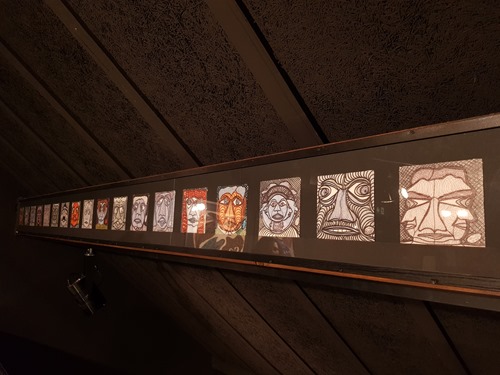 This one is by a Japanese artist who was obsessed with trams: 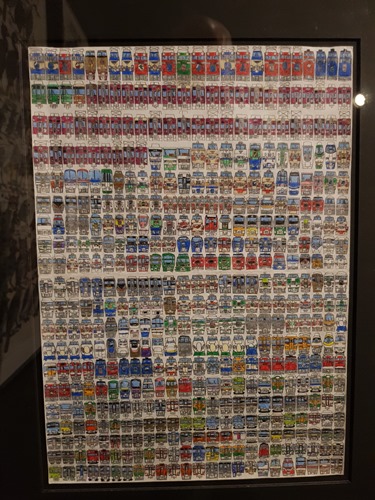 Another artist had his own love of trains (he had lost several family members in car accidents). 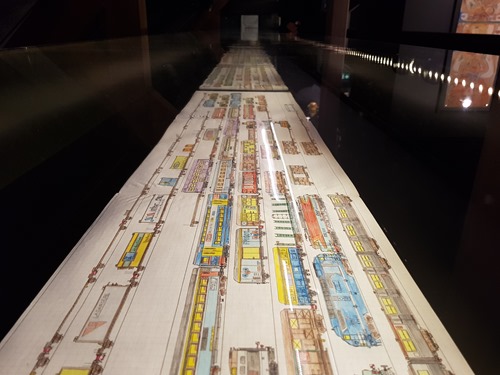 I loved this piece by an autistic artist who has an incredible memory but creates his own taxonomies for everything he sees in the world. 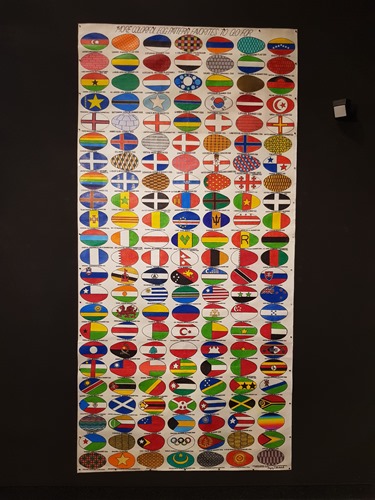 I also liked the works by this artist, who drew solely in ballpoint pen. 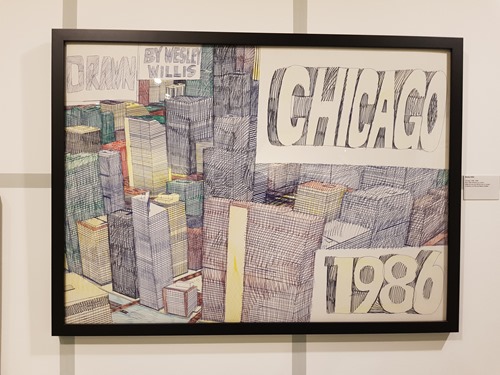 There were some really fascinating sculptures, too. These were from India: 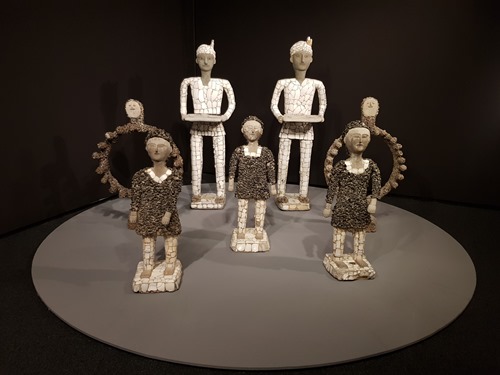 These were crafted from clay: 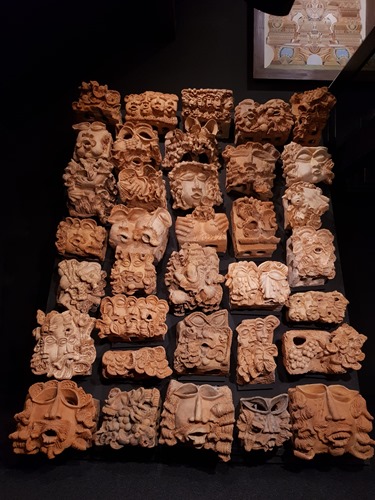 Others were assembled from shells: 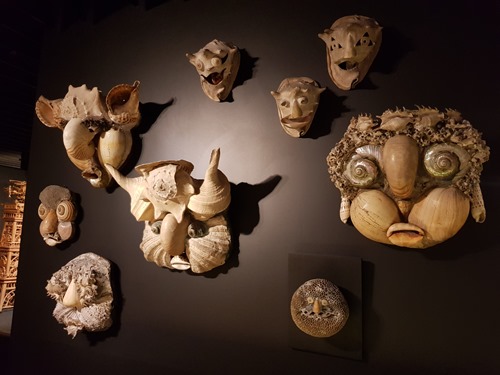 The artist who made this colorful sculpture ate an incredible amount of seafood just to get the shells he would then colour with enamel paint or nail varnish: 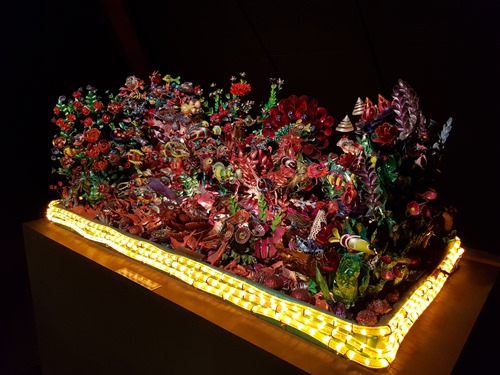 There were also sculptures that were sewn and embroidered. 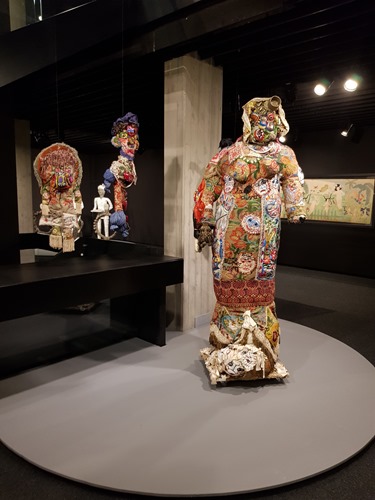 This museum is incredible. Many of the artists were (some still are) clearly deeply afflicted but found a way to ease their suffering by creating beautiful objects that were often never intended to be seen by others.