This post is a bit of a grab-bag of various event-related topics. The first one (chronologically, if not in terms of the title above) is the availability of session recordings from the recent CanBIM event: “The Future of Work: Designing Resiliency and Building Work Safety Post-COVID”. My own session was entitled “Using Generative Design and Digital Twins to Improve Occupant Well Being”. As it was the first session of the day – with a new web streaming platform – there were a few teething issues for the sponsor’s introduction (and the session auto-closed a little too promptly, which meant... Read more →

In the last post we saw how the Data.Gate node can be used to send geometry to Revit 2021 when the “Create Revit Elements” button gets pressed from the Explore Outcomes UI for a Generative Design study. Phew. In this post we’re going to dig into how this node can also be used to have other “side effects” such as storing the various input parameters to a text file. For the purpose of this workflow I’ve chosen to hack the standard Three Box Massing.dyn graph (which ships with Revit 2021 as a sample for the Generative Design feature). The... Read more →

I was inspired to write this post by a chat I had with Zachary Kron, earlier in the week. I’d been noodling on how best to support a workflow where users of the Generative Design feature in Revit 2021 can select specific solutions in a study and do something with them. The specific use-case was around some functionality I’d prototyped back during the days of Project Refinery, where while exploring the results created during a generative study you could double-click individual designs – whether in the scatterplot or the design grid – which would add them to a graphical... Read more →

I’ve just realised that time is running out for people to submit their class proposals for AU 2020. The deadline is on June 22nd, which is this coming Monday. From my side I’m almost certainly going to submit a class to discuss the details of the work we’ve been doing on post-COVID return-to-workplace efforts. Essentially digging into how we’ve used the Space Analysis package to implement metrics that make sense for this type of analysis. If you’re thinking of submitting something, but haven’t yet put pen to paper (or rather fingers to keyboard), then I suggest giving it some... Read more → 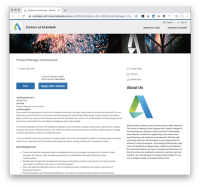 There’s an exciting job posted for a key role in a new project (product?) team at Autodesk named Constructwin. Here’s some information from the posting: Do you want the opportunity to be part of a startup environment and have a big impact on a brand-new product? Are you looking to be at the forefront of innovative new technology that will ultimately help people imagine, design, and make a better world? If so, come join the Constructwin team at Autodesk! Our mission is to create Digital Twin technology and solutions that will transform how buildings are designed, built, and operated.... Read more →

Give Dasher sharing a try

While I announced the sharing feature – and its corresponding API – some time ago, I still had some work to do before it could go live on the Dasher site: largely around supporting timezones properly when specifying time ranges for data display, but there were some other minor tweaks needed, too. Anyway, the feature is ready enough for people to kick the tyres on it, at least. Here’s a link which will launch the public Dasher demo for you, taking you straight into a “surface shading” view for C02 values on the 1st floor, bringing up the graph... Read more →

I have a quick update to share on Dasher, today: I’ve just pushed live a version to the main Dasher site that enables a core Forge viewer extension to perform visual clustering of model contents. I talked about this back at the beginning of the year, but there was a core change needed to the Forge viewer to make it work for Dasher: specific details are in the blog post I just linked to, but it relates to the fact we rely on the Navisworks format for our models, and these have a different property structure when loaded through... Read more →