Virtual Forge Accelerators – coming to an office (very) near you

For two of the last three weeks I’ve been lurking in virtual Forge Accelerators: as I mentioned last time, the Forge team has pivoted to virtual events after this year’s Accelerator in Sydney was forced online due to a COVID-related office closure. (Incidentally I need to get used to the team’s new name: they recently switched from Forge Partner Development to Developer Advocacy and Support. FPD is no more, the future is DAS!)

I did manage to keep up-to-date with the various discussions being held on Slack, though, and thought it worth sharing my thoughts on the two events. Firstly, I have to say that I was personally a little apprehensive about Forge Accelerators going online, despite there being no other choice (beyond not holding them): in my own experience a great deal of the value is in casual interactions between attendees and in-person contact.

Having said that, I have been incredibly impressed with the quality of the events the DAS team has put together: they’ve clearly put a lot of thought (and masses of energy) into making these virtual events a success. From the initial kick-off presentations to the final demo day, the DAS team has kept people fully engaged in the event via Slack and Zoom. Each participating company or organisation has a private Slack channel they can use to contact the team, as well as a number of open channels – many of which are focused on specific Forge technologies or services – that they can use to ask questions publicly and reach out to other participants. Someone from the DAS team in each geography is assigned to triage the various issues people have asked about, and the responses are consistently on point and lightning fast.

Just like with the traditional Accelerators, it’s not all work, work work – people have a lot of fun, too. Here’s a shot of some members of the DAS team kicking back on a coffee break: 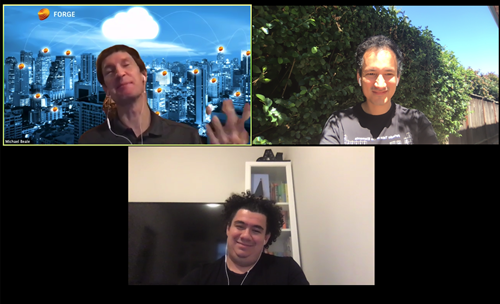 And here’s a picture of Patrik from BIM Virtual/Skanska, whose team really helped create a party atmosphere during Metropolis: 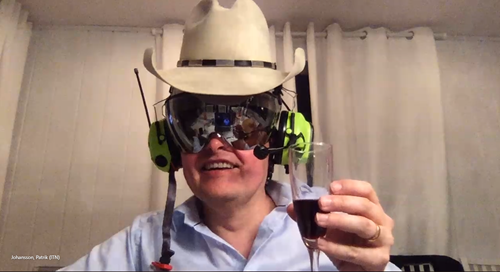 I know the participants have all been asked to provide feedback on the new format, and I can only guess that they’ve found it compelling – I can certainly only say good things from my side. I also get the sense that the DAS team is learning a lot from running these Accelerators online and tweaking the format over time: once again the current crisis is forcing us all to exercise new muscles that I’m sure will stay strong once we come out the other side.

As a lot of people have expressed an interest in attending Accelerators as a way to kick-start their Forge skills – and what better time to do it, given the current situation? – the DAS team has also created a new introductory virtual offering called Forge Live Review, which over the course of 1-4 days takes your through the basics of the Forge viewer, creating dashboards and using design automation. The first one starts today (April 27th), but I have no doubt they will be holding more over time.

Finally, a quick note about a weekly series of talk by Forge partners that might help inspire people interested in using the platform to address certain categories of challenge. The first one – on May 6th – is about Digital Twins (something I can confirm Forge is great at helping build ;-), the next is on AR/VR, followed by Configurators and then Dashboards & Insights. These will no doubt be a great way to get inspired to start using Forge, before signing up to attend both a Forge Live Review and a virtual Accelerator!