A visit to Geneva with Brunet Saunier Architecture

On Thursday I had the pleasure of meeting with Jacques Levy-Bencheton and Antoine Kersse from Paris-based Brunet Saunier Architecture in Geneva. Back in July I’d been asked by Jacques and Jerome Brunet to participate in a project they were working on relating to architecture for hospitals: they’re creating a book based on a series of interviews – and their Phylum H work, which Jacques presented at AU 2018, do check out the recording – that will look at architecture of hospitals, both retrospectively and prospectively. My role would be to participate in an interview alongside Jacques – run by Antoine – as we discuss the current and future use of technology in the industry.

We’d discussed various locations for the interview, and ended up opting to meet in Geneva, which was absolutely perfect for me – being an hour from Neuchatel by train – and not too bad for Jacques and Antoine – who could travel from Paris in a hair over 3 hours. I waited for them at Geneva, as their train came in. 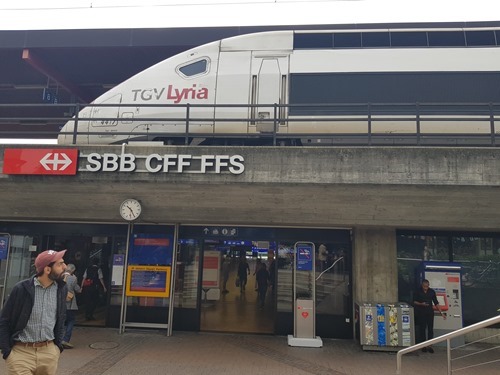 From there we headed across to HUG – les Hôpitaux Universitaires de Genève – for which Brunet Saunier had designed their most recent – and most impressive – building. 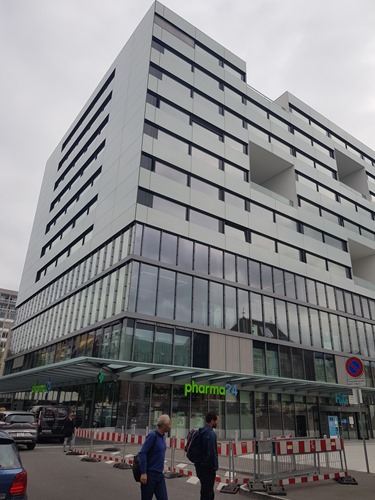 To warm up for the interview, Jacques and Antoine took me on a tour of the building. One of the most interesting characteristics about this building’s footprint is its width: in order to optimise land-use – something very important given the cost of real-estate in the city – the building had to be much wider than most hospital buildings. Which could clearly have a significant impact on the amount of natural light that would enter.

The approach chosen to manage this was to have a series of two-story openings cut into the shell, allowing daylight to enter deep into the centre of the building. 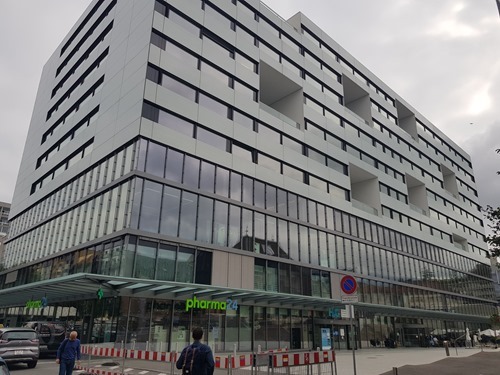 To tour the building we entered via the lobby and headed up to the part of the building focused on medical care. 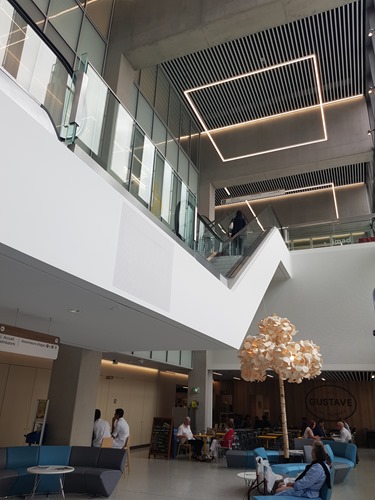 The corridors in Swiss hospitals are apparently much wider than in French ones, allowing beds to pass even if items have been left outside rooms. I was definitely impressed by the luminosity of the corridors. 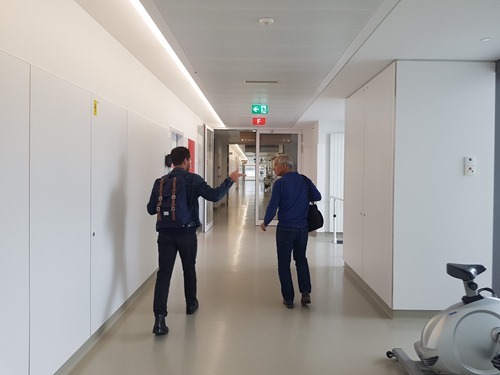 We walked onto a number of the balconies in the cutaway sections, initially on the lower floors… 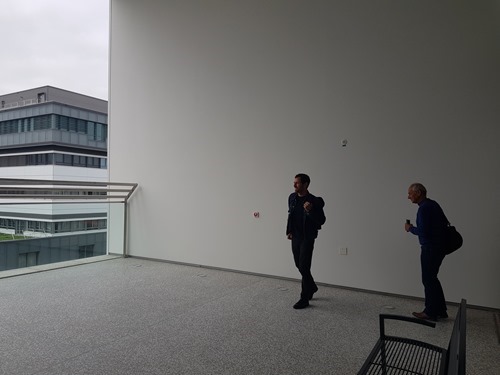 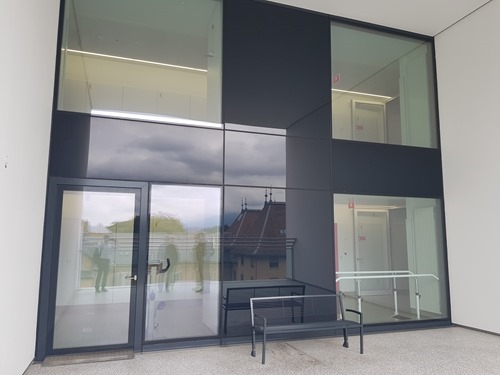 … and then at the top of the building. 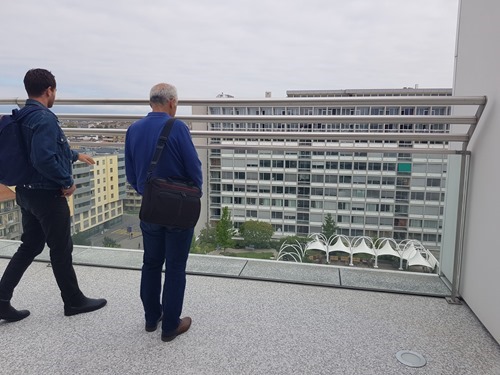 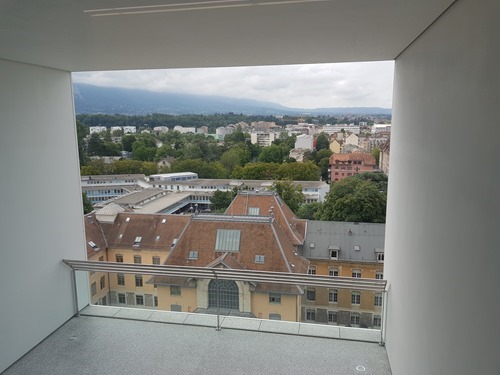 You can see from the floorplan how the cutaway volumes are offset to maximise the light that’s brought into the central area. 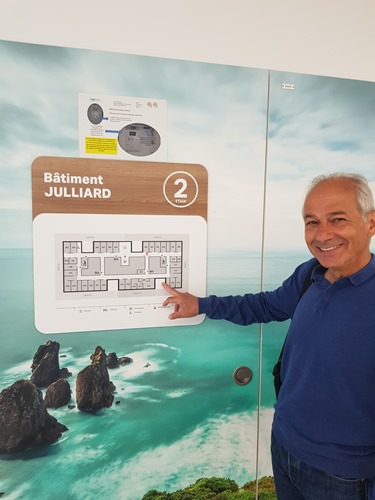 The patient rooms are obviously on the outside of the building, and all have large windows set low enough to provide views from the beds, as well as separate openings to let fresh air enter. 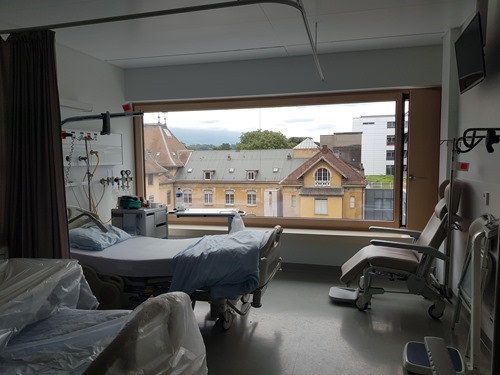 After the tour, we headed down to the hospital cafe where Antoine conducted the interview. We talked for over an hour about a variety of topics – including Digital Twins and Generative Design, of course – so I hope there’s enough of interest for Antoine to capture in the piece. The book will be published in both English and French hopefully in time for AU 2019, where Jacques will be delivering a follow-up session on his team’s work. 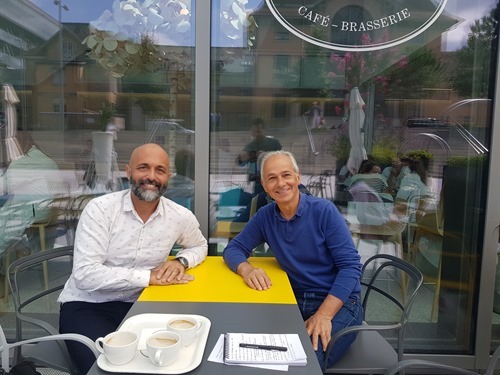 Jacques and Antoine took me to lunch near the train station in Geneva, before heading back to Paris.

On my way home I took the opportunity to meet up with Chris Gribben, an old friend from University who works in Geneva (and has done for about a decade… it’s ridiculous that this was the first time we’d seen each other since 1993). 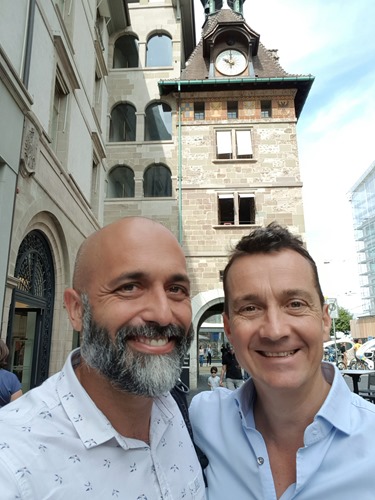 Today I’m heading across to Zurich to meet with people involved in the NEST project, along with my manager, Azam Khan, who’s across from Toronto to deliver a keynote at the humARCH conference being held at NEST this week. Things are moving ahead nicely with the project, and I’m looking forward to sharing more about it, soon.