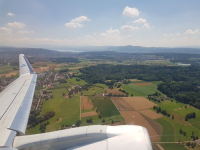 On Tuesday I flew across to Schipol airport for another Generative Design-heavy few days in Amsterdam: I’d been asked to deliver a keynote as part of a multi-day meeting between Autodesk’s account team and Arup’s strategic sourcing team. The focus of the presentation was primarily Generative Design with additional information regarding Digital Twins (and specifically MX3D). It was a very nice day, flying out of Zurich. I had a window seat (with a clean window!) for once, so took some photos on take-off and landing. There was lots of farmland at both ends of the trip: the big difference... Read more →

While I was having fun in Paris, the participants at our first Generative Design for AEC Intensive Residency were having their own fun in Toronto. Here’s a quick recap of the rest of the first week… Tuesday was all about Dynamo and Refinery. Our Product Managers for each presented their technologies and dug into some specifics on how to use them. First up was Sol Amour, PM for Dynamo. Next was Lilli Smith, PM for Refinery. Simon Breslav then dove more deeply into Project Rediscover (something I’ll myself be talking about at AU 2019 in Las Vegas, so I’ll... Read more → 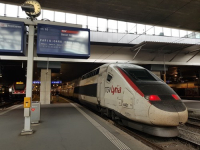 Yesterday I hopped on the TGV Lyria in Bern to head across to Paris for a meeting with a large customer who was interested in learning more about generative design. It was nice to be heading back across to Paris – especially just before the summer break – as I have very fond memories of my year studying just south of the city. On arrival at Gare de Lyon I decided to walk for a couple of kilometres to stretch my legs after five hours in the train, to see part of the city I didn’t know but also... Read more →

I mentioned a few weeks ago that I’d spent some of my time at the Forge Accelerator in Barcelona migrating the Dasher 360 codebase to work with v7.0 of the Forge viewer. This version of the viewer does have breaking changes – all of which should be documented in Jaime’s blog post – but I thought it worth listing the changes that affected us in a post of my own. The first big change we had to deal with – and this one was pervasive, albeit easy to handle – was the promotion of GuiViewer3D from the Private namespace... Read more →

The Generative Design for AEC Intensive Residency kicks off in Toronto 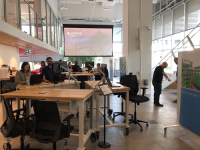 Yesterday marked the first day of a very special 2-week event being held in the spiritual home of Generative Design for AEC – at least from Autodesk’s perspective – our new office in the MaRS district of Toronto. (In fairness the spiritual home is probably where The Living work in New York, but the MaRS office is at the very least an important temple. ;-) Over the next fortnight 7 teams from 3 continents – from both industry and academia – will be using Dynamo and Refinery to implement generative workflows at various architectural scales. We’re expecting the participants... Read more →

Things are heating up in the Systems Research team (and not just because it’s summertime). I’ve been digging into the Dasher 360 codebase, this week, to add better support for “equipment” sensors – which have multiple sensors and data feeds coming off them for a single unit – particularly with respect to tooltips. As an example, here’s a ubertooltip summarising recent data coming off a Mazak 5-axis mill in our Advanced Manufacturing Facility in Birmingham. There are devices in the AMF that have more sensors – up to 60, in fact – but those feeds were less visually interesting... Read more →

Let the Forge team know what you think!

The Forge team has published a feedback survey. Head on over to the Forge blog to find out more. This is a great opportunity to let the team know your likes/dislikes/pet peeves with the existing API set, its documentation and code samples. What more do you need to be able to build your dream product with Forge? Be vocal – this feedback will help steer Autodesk’s Forge development priorities around Forge. It should only take about 10 minutes to fill out, so please do so today; the results will be compiled and shared towards the end of July, so... Read more →