The first Forge Accelerator in Dublin

Last week I thoroughly enjoyed a short week at the first Forge Accelerator in Dublin. (It was short – for me – because I arrived on Monday afternoon and headed home, already, at Thursday lunchtime.)

It was only my second time ever to visit Ireland, but the second in just a few months, and my next trip across is already planned for June (if one doesn’t happen sooner). I was staying across the River Liffey from the office, and enjoyed the stroll across a convenient pedestrian bridge, even if the wind and harmonic resonance sometimes made me question the wisdom of that particular choice. 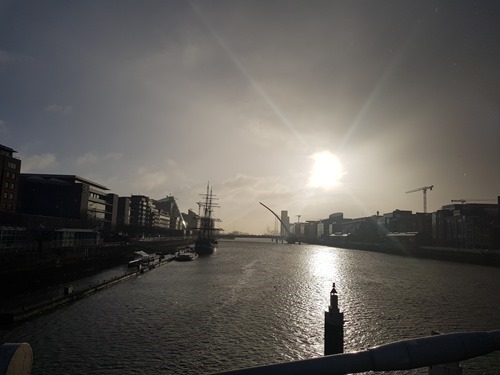 Aside from meeting new people working on interesting issues related to the Forge platform, Accelerators are also a nice opportunity for me to catch up with colleagues in the Forge team. 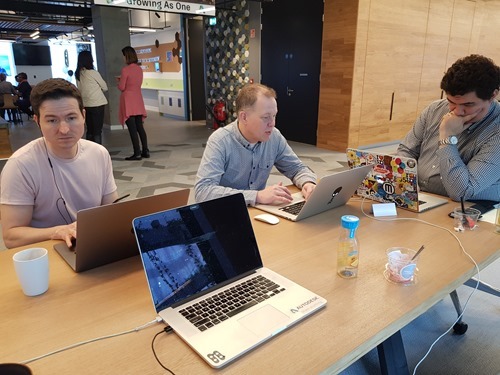 I’m not sure why I took a picture of the mugs in the Autodesk Dublin kitchen, but there you go. 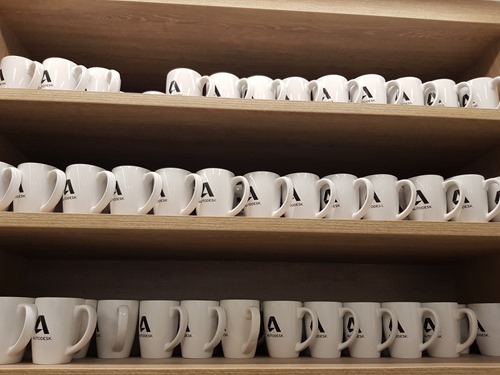 One notable change since my last visit was the completion of the chandeliers in the Pub area, full now with (empty) Jameson whiskey bottles. 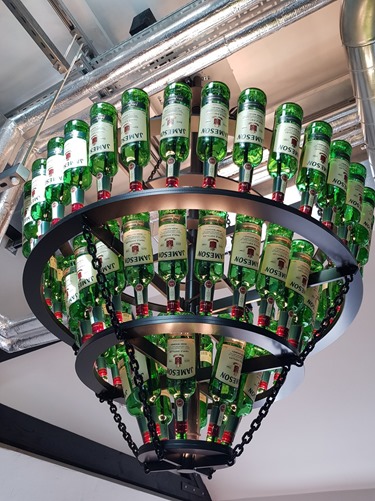 While Silicon Dock is buzzing with new companies, there still seems to be plenty of space in the adjacent buildings. I have no doubt the space will be filled soon, with all the activity happening in the city. 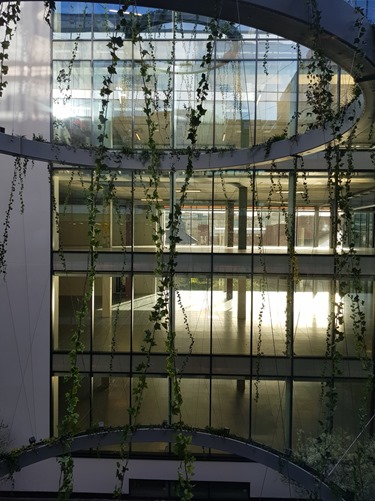 This accelerator wasn’t held in a single conference room, but was split across a couple of them, with a number of open desks used in the adjoining area. Here’s where the Enstoa team camped out for their hacking efforts. It was good to catch up with them all, especially as they’re busy planning the upcoming Dynamo Hackathon in London (which I’ll be heading across for: more on this in the next post). 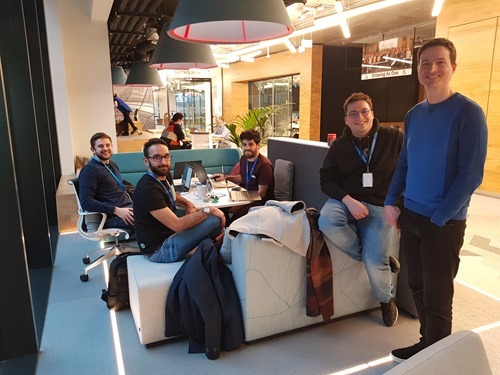 I get a kick out of this photo, mainly because – even if I know he’s imparting some important knowledge about Forge – I like to think Jaime’s actually giving advice about hair. Can I make that joke? I’m firmly in the same camp, myself, so I think I’m entitled. 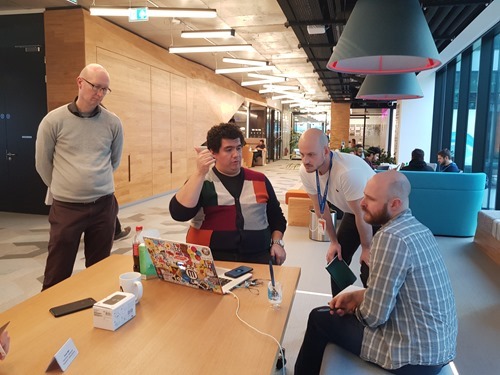 (When I first met Jaime he had massive hair – hence his Twitter handle – and I’m wondering whether it’s now starting a resurgence after being trimmed closely for a few years.)

While in Dublin, Cyrille and I took the opportunity to catch up with Raphael Racine, an old friend and colleague we both worked with in the Neuchatel office. It was also an opportunity to check out Urban Brewing, where the Accelerator attendees would have their celebration dinner on Thursday night, once I’d left. 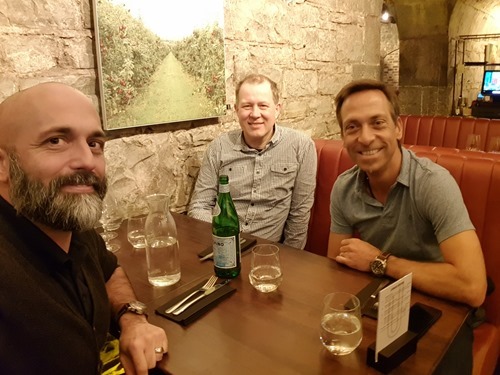 On the subject of dinners, etc… We had a fantastic meal at FX Buckley’s on the Monday night. It wasn’t our first choice – that was Matt the Thresher, the restaurant across the street, which was fully booked – but the food turned out to be outstanding and the decor very interesting. 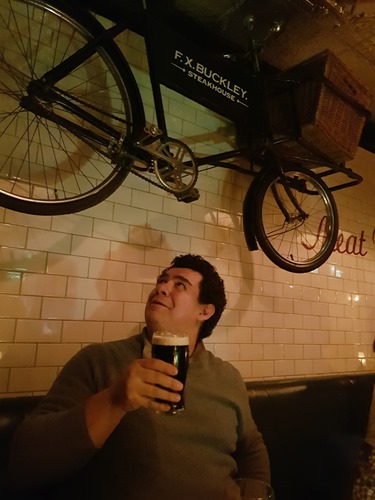 On the Wednesday night we met for drinks at Grogans – which I’d visited on my first trip across with Brian Glancy from Kingspan – before heading onwards into town. 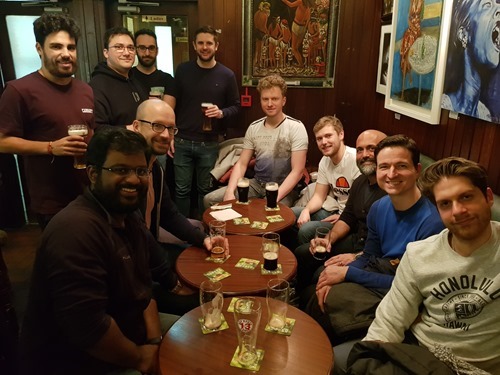 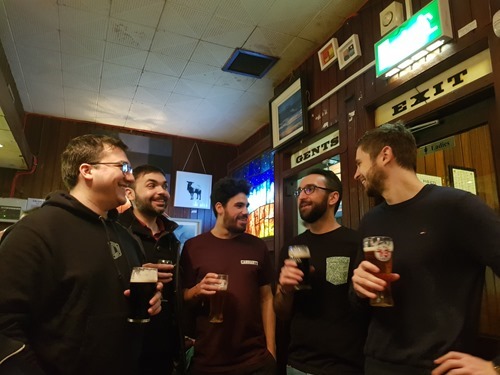 As one of our number was due to meet a friend at Dicey’s Garden, a number of us ended up tagging along. It was a lot of fun, and with a €5 cover charge and €2 pints, it was understandably packed. A real Dublin experience. 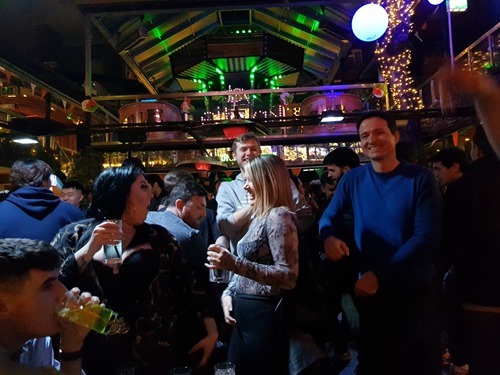 I was introduced to something called a baby Guiness, a shot of Kahlua topped with Baileys. (Because, you know, it looks like a baby glass of Guiness.) Apparently this is the most popular shot in Dublin. Who knew? 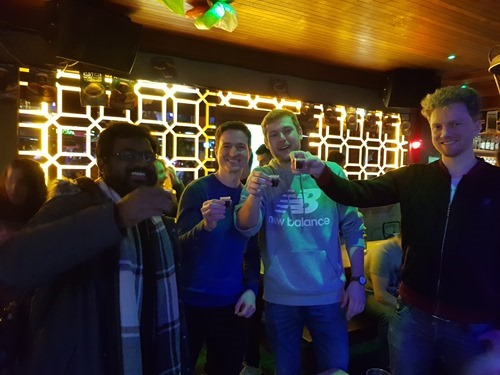 As we’d (perhaps unwisely) skipped dinner, we stopped off for a late-night bite at Eddie Rockets on the way back to our respective hotels. 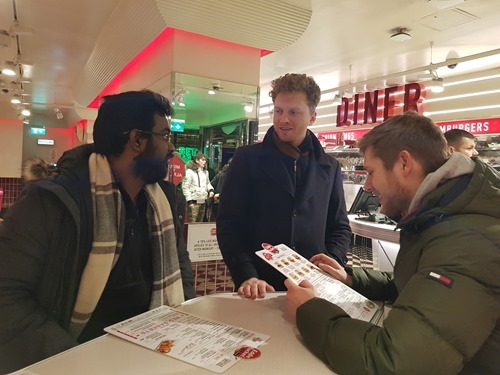 It was a really fun night, capping off (for me, anyway) a fun few days. On our last morning walk into the office, Adam and I spotted a Game of Thrones bus tour leaving from outside of our hotel. I hadn’t realised so many of the locations were in (Northern) Ireland. 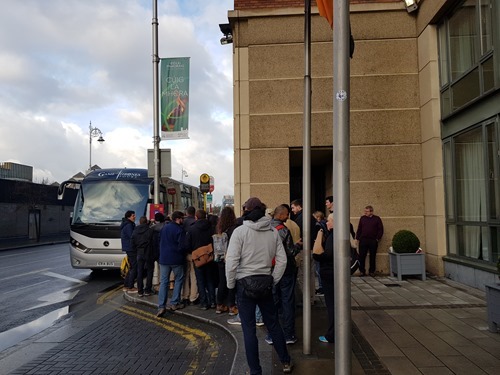 After a few hours in the office on Thursday morning – wrapping up discussions on a number of topics – I headed back across the Liffey, once again, to catch the bus to the airport. I once again crossed the Samuel Becket Bridge, this time catching it just as the rain had cleared. 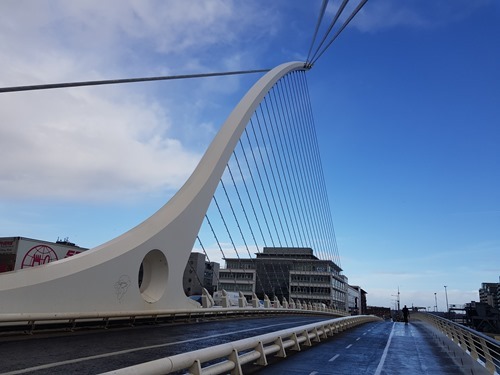 I was a little sad to be leaving early – missing the celebration dinner but also the presentations of what the participants had achieved during the week – but it was one of those choices: I’ve been on the road so much lately that I really had to prioritise time at home with my family.

A big thanks to Forge team – Peter, Cyrille, Adam, Jaime – as well as the Accelerator attendees for making it such an enjoyable trip!