Today was a fantastic day. Members of the BIM 360 engineering team based in Gumligen went on their annual ski day and kindly invited me along. We’d originally planned to go on February 1st, but the weather was very poor and so the plan was cancelled. It was rescheduled for today, but only earlier this week – once it was clearly goingto be a gorgeous day.

[For those of you who didn’t know we have BIM 360 develoment staff based in Switzerland: the team originally came with the C-Plan acquisition – which happened back around the turn of the millenium – and the team have worked on a variety of products, since, from Topobase, AutoCAD Map, Infraworks to BIM 360 (mainly on the preconstruction side of things). They’re a great team with a deep and varied knowledge.]

When the ski-day was scheduled, previously, I’d deliberately made sure to take my ski stuff back down from the place where we usually ski (and leave the stuff, to save effort), the weekend before. This week I was caught a little by surprise, but – given a fairly gruelling meeting schedule from Tuesday to Thursday – I was determined to make it work. The ski-day was happening in Saanenmoser – part of the Gstaad region – while my stuff was in Adelboden, a town a valley (and then some) away.

Now I grew up in flatland: big chunks of East Anglia is below sea level – perhaps a reason I feel at home in the Netherlands – so navigation was simple. You looked at your 2D representation (back then a paper map) and calculated times approximately based on the path a crow flies and the type of roads that were available (thick = quick). That doesn’t work as readily in Switzerland: even with satellite navigation systems you sometimes get routed along mountain passes that are closed during the snowy months (this admittedly happens less, these days, but still).

The point being, the distance from Adelboden to Saanenmoser might only be a 10s of kilometers as the crow flies, but going there either by car or by public transport could take nearly 3 hours.

Getting there on skis (or in my case a snowboard) is a different matter: you can cross mountain ranges in minutes. So I decided to go across country from Adelboden to Saanenmoser and meet the team there. I came down (or rather up) on Thursday night, had a short night’s sleep before getting on the first lift up (at 8am) to Adelboden’s main mountain. The view was spectacular! 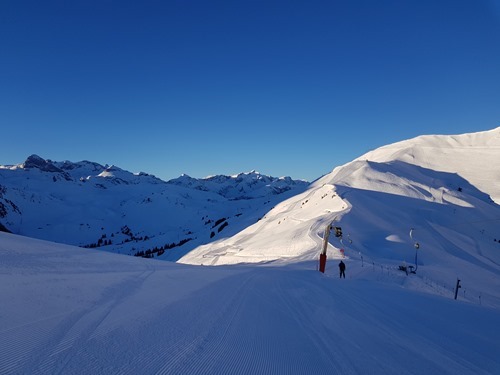 I boarded across and down towards the town of Lenk, which was already significantly closer to Saanenmoser. 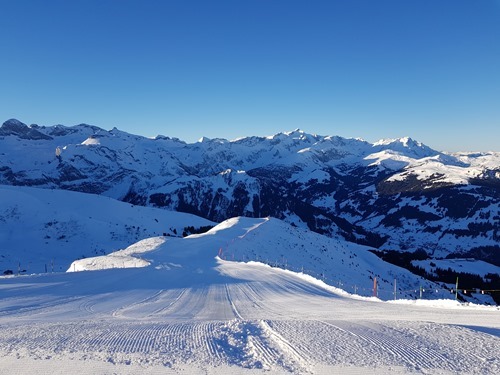 I had to take the gondola down to Lenk – you can’t ski all the way – and then a bus to the train station. This is where my plan stalled a little: I arrived basically as quickly as humanly possible – at 8:45am – but the trains to Zweisimmen leave at 37 minutes past the hour. So I had time to grab a coffee before catching the 9:37am from Lenk to Zweisimmen. 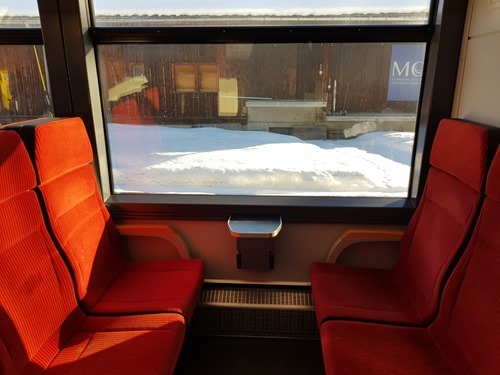 Zweisimmen is in the same ski region as Saanenmoser – and has its main gondola a short walk from the train station – so it seemed a good choice. Sure enough by about 10:30am I’d met up with the gang. 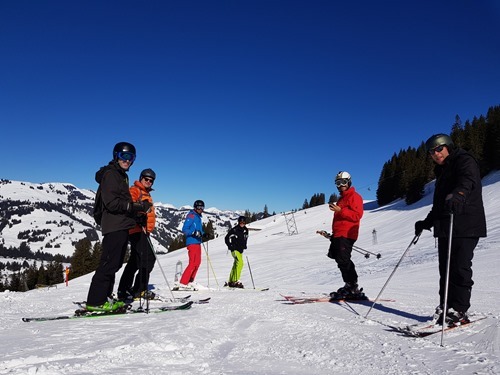 We had a lot of fun discovering the Gstaad region – one that I hadn’t visited before (other than many years ago for a surprise heli-skiing birthday present for a good friend). 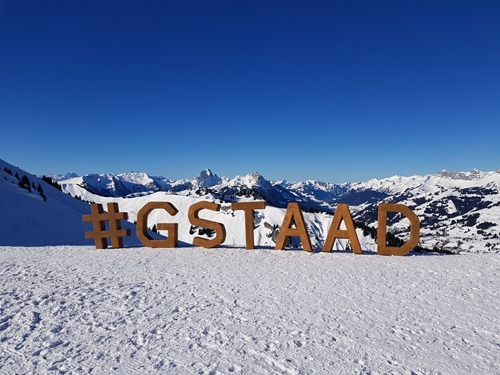 In typical Swiss style we stopped at 11:45am for lunch. 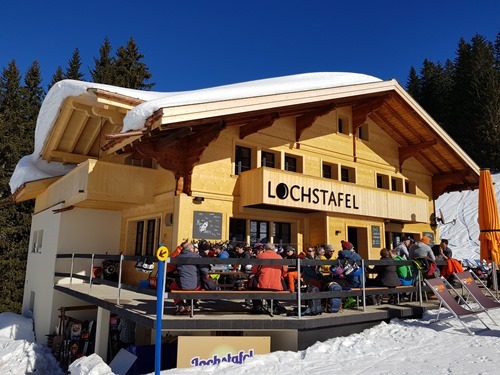 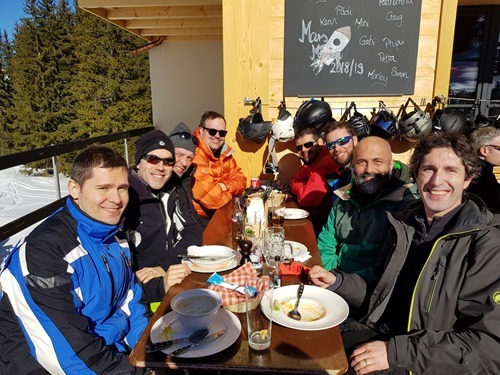 We continued skiing for some hours after lunch, although the weather was so warm many people just sat and enjoyed it. 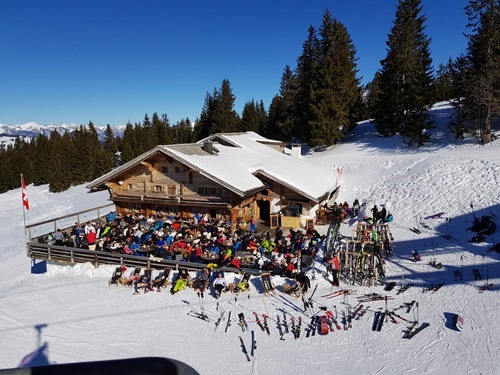 I boarded right up to the last moment, arriving just 5 minutes before the last usable train back to Lenk (3:37pm). 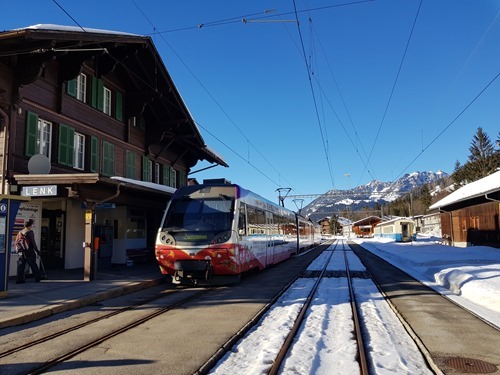 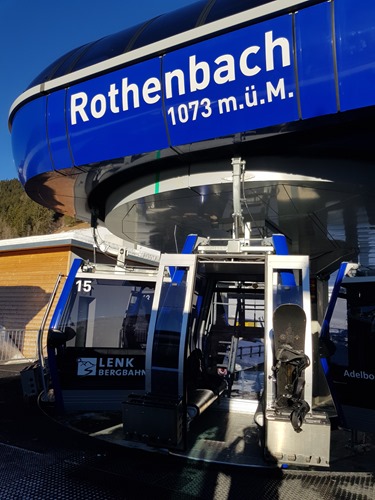 Everything else went to plan. I boarded down from Metsch to Geils, where I got on another bus and bumped into a local snowboarding instructor who we’ve known for many years: she’s given lessons to each of our kids at different times. Despite knowing her for years, there was funny moment when I took off my helmet: she was utterly shocked to realise I have a shaved head! She’d only previously seen me with my helmet on, it turns out. How funny. 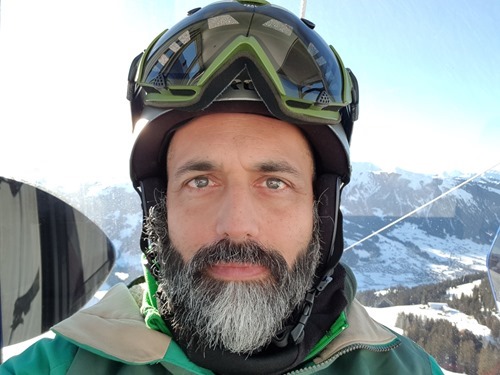 I got back to the flat in Adelboden by about 5:45pm, after a truly excellent time. This kind of excursion isn’t without risks: a little excess wind can easily cause gondolas to be shut down, leaving you stranded, but everything worked absolutely perfectly.

Many thanks to Andreas and Hanspeter for inviting me along, as well as to the rest of the Gumligen team who made me feel so welcome. I’m looking forward to the next one!