A short video about the MX3D smart bridge project

I’ve been having a lot of fun working on projects I can’t really blog about, this week – on the one hand hacking Refinery to add some new UI features I thought would be interesting to explore, and on the other hand working in Dynamo to make some architectural changes to the Van Wijnen tool – so I really haven’t had much time to blog about anything here. Hopefully I’ll have more to talk about during the last few weeks before the holidays.

I did just want to publish this video created by my friend and colleague Merry Wang – with contributions from the rest of Autodesk’s Complex Systems Research team – about the MX3D smart bridge project. I pop up a couple of times in the video, but unfortunately the day we recorded we had some issues with background noise in the MX3D factory: it sounds like we recorded it on a 1980s cassette recorder in a wind tunnel. Honestly I’m amazed that Merry was able to make it sound as good as it does!

In related news, here’s a quick screengrab of the side-by-side view of both video and 3D skeleton data inside Dasher 360. When we saw the comparison we realised we had to recallibrate the data from one of the cameras: the bodies were flipped and a bit high off the ground. It was a really cool moment when we had the video footage right there to show us what changes needed to be made, though. I’ll post a video once we’ve ironed out the kinks in the data processing. 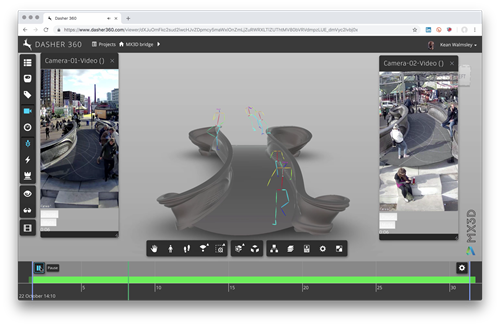 Tomorrow I’m heading back across to Zurich to talk to a customer about Forge, IoT and Generative Design: hopefully that’s something I’ll be able to talk about on Friday, at least.