Adding 3D geometry to a scene in the Forge viewer

In the last post I introduced the series where I’ll be talking about the journey I’ve been going through to add skeletion data inside Dasher 360 (which is, of course, based on the Forge viewer).

The first step I took along this path was to find a way to add simple 3D geometry into an existing scene inside the viewer. This is something we do in a limited way inside Dasher – we use point clouds to represent the locations of sensors, for instance – but I wanted to work out the right approach for doing this for data that could show people’s bodies as they walk around. The eventual aim will be to have the skeletal positioning driven by the database – which has been populated by a neural network harnessing computer vision data – but the primary goal for the next few posts is to prove that the Forge viewer is capable of displaying skeletal geometry.

I came across this sample extension by Philippe Leefsma that turned out to be a useful starting point: it highlights the various mesh faces of the object you select in the viewer. There were a few changes I made to the way it works:

Here’s a quick image of the results: 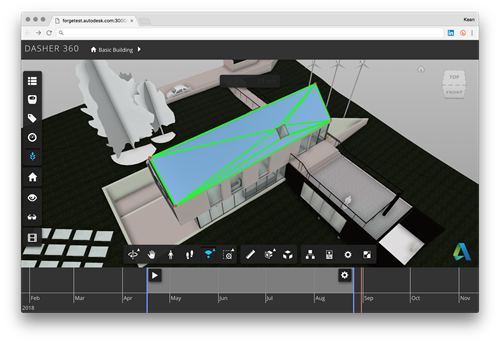 We draw red spheres at the vertices and draw edges between them as green cylinders, as you can see from this animation:

Here’s the code that does it all:

In the next post we’re going to see how we can modify the geometry placement code to create a simple skeleton on the selected geometry.