The call for proposals for Autodesk University 2018 has ended and people have the opportunity for vote for their favourite classes. Head on over to this page and start voting for the classes you’d like to see at AU 2018.

From my side, I’ve submitted three different class proposals for AU 2018. I don’t expect (or want!) them all to make the cut, but I’d be happy to receive your votes for the ones that interest you most.

My favourite proposal is actually a class that would have 3 speakers, two from Autodesk and one from Van Wijnen. The plan is to have Lorenzo Villagi – a colleague from The Living, which is also part of Autodesk Research – talk about the concept behind the collaboration we’ve had with Van Wijnen to explore Generative Urban Design. I would then talk about how we’ve implemented the project using Dynamo and a new tool called Refinery, while Jelmer Frank Wijnia from Van Wijnen would talk about how it’s been implemented and the impact it’s having on their process.

To vote for this class, search for “Van Wijnen”. 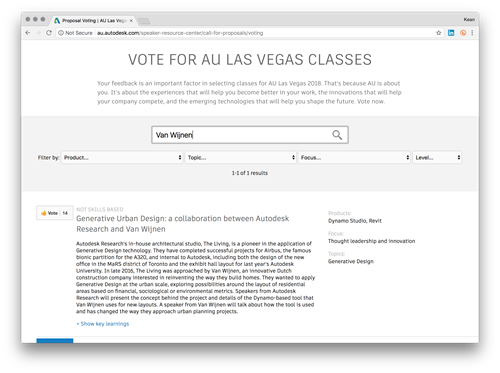 My second favourite is a class that showcases some of the work we’ve done in Dasher 360 to integrate campus-scale data from InfraWorks and city-scale date from Esri’s ArcGIS. It’s really about how you can coordinate the use of the Forge viewer alongside other viewing components. 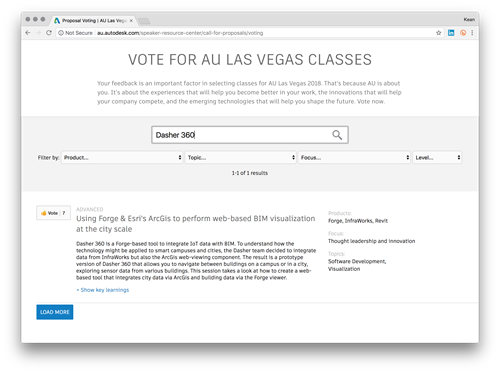 The third submission is a class about getting started with Generative Design for AEC, showing how to create a basic Dynamo graph and use it with the Refinery optimization engine to implement generative workflows. It was submitted at the request of the Forge DevCon team – as they had wanted to include a class on ths topic – but in the end it seems as though it’s not going to be needed for this year’s DevCon. The class proposal is still there, however, so please feel free to vote for it if you find it to be of interest: it may yet be considered interesting material for AU proper.

To vote for this class, search for “Getting started with Generative Design for AEC”. That’s it for my AU classes for this year. I’ve been involved in the selection process for the Forge DevCon, so I can say that there are some fantastic classes in the line-up for both the Forge DevCon and AU itself. I’m looking forward to it!