My AU 2018 classes… all about Generative Design for AEC

I’ve seen a few of these postings via LinkedIn, and thought it was time to post something of my own. As mentioned previously, I submitted three class proposals for this year’s Autodesk University in Las Vegas.

Two out of three have been accepted: the ones focused on Generative Design for AEC. 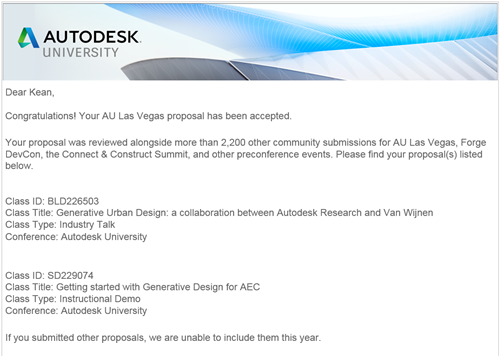 I’m really excited about the first one, in particular, and it seems like it may also be featured in one of the pre-conference events (more on this once things get confirmed). I think it’ll be really cool to look at the project we’ve been working on with Van Wijnen from multiple perspectives, especially if we get the chance to go into greater depth.

The second class will take an introductory look at Refinery – our optimization back-end driving Generative Design for AEC – which is now starting to be talked about more publicly (more on this soon, too). I’ve just been asked to spend time on another Refinery-based project during the lead-up to AU2018, so hopefully I’ll soon feel qualified to actually deliver this class. We’ll see!