I’m on the train, heading to Geneva airport for my trip across to Barcelona for the latest Forge Accelerator. It seems there’s a good crowd in the room, already, so it should be a fun week.

Yesterday I submitted two classes for Autodesk University 2018 in Las Vegas: I wonder what proportion of classes are submitted on the last day of the CFP period, and whether this number is stable, year after year. I usually try to submit my own classes earlier, but this year things have been a little hectic, for some reason.

The first class I submitted is really for the Forge DevCon, and focuses on work we’ve done to integrate multiple viewers into Dasher 360 to implement a campus or city view. In the first case we’ll look at using data from InfraWorks for campus-scale, and then the ArcGis 3D web-viewer for city-scale.

The second class is about the project we’ve been working on for Van Wijnen around “Generative Urban Design”. The plan is to have three presenters talk about the project: Lorenzo Villagi from The Living (Autodesk Research’s in-house architectural studio and the people behind the bionic Airbus partition) will talk about the overall concept behind the project and the requirements that were captured, I’ll talk about our use of Dynamo along with the optimization engine used to drive it, and Jelmer Frank Wijnia from Van Wijnen will talk about how the tool has been used and how it’s changing the way Van Wijnen approaches residential planning projects. I think this will be a really cool class – assuming it gets accepted and the planets align on the three of us being there.

I nearly submitted a third class about a research project we’ve been working on to integrate capabilities from Dasher 360 into InfraWorks (and vice-versa), but I think we’ll look for a different approach to share this information: I’ll probably cover some of this in the first class, above, and look into what other options we have – perhaps some kind of exhibit hall demo. We’ll see.

Next week is AU London, which should be a lot of fun. It’ll be a chance to talk to people about our use of Forge in Dasher 360, as well as to spend some time on the Forge booth. 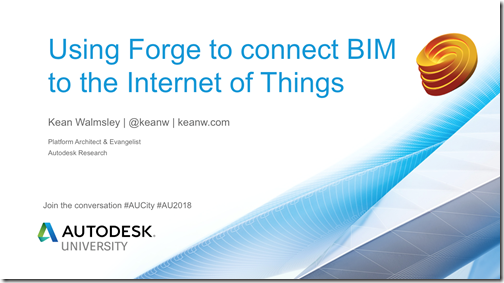 A few people have reached out to coordinate meeting up for a chat: don’t be shy if you’re attending the event and would like to meet up – I always enjoy connecting with people at these events. See you in London!