When I first visited Neuchatel I instantly fell in love with the city. This was back in the summer of 1995, during my second round job interview for Autodesk. From that moment I knew I wanted to live here, but it was only in early 1998 that I had the chance to do so: a colleague had moved across to San Francisco to join the Kinetix development team, which left a Swiss-based vacancy in the European Developer Support team. I was thrilled to have the chance to move across and fill that role.

During my first few weeks in the city I stayed in a quaint little hotel called la Maison du Prussien. To my great surprise another colleague from the UK was staying there, too: John Goodman – who many of you will know from one or other of his roles at Autodesk – was moving across to Neuchatel to become the EMEA Product Manager for AutoCAD. John and I knew each other from the Guildford office of Autodesk UK, but it was really at this point that we cemented the foundation of what was to become a multi-decade friendship. John and I have quite similar backgrounds – we’re both from East Anglia (John is from Suffolk, I’m from Norfolk) – and share a constant delight at having the chance to live and work in such an amazing place. We often talk about life growing up in the East of England in the 1970s and 80s (The horror! The horror!) but never with any misplaced nostalgia.

Both John and I have since moved away from Neuchatel for a period – John moved back to the UK for a couple of years, while I went off to the US and to India – but all roads have somehow led back here. We’ve both settled back here and put down serious roots, in the meantime, building families and integrating into the local community.

To celebrate the anniversary of moving to Neuchatel, John and I went back to la Maison du Prussien this week for dinner. It was to celebrate 20 years of life here – and of our friendship – but I also wanted to thank John for providing logistical back-up during our round-the-world trip: we re-directed our post to the office during the 6 months we were away and John regularly emptied my pigeon-hole and scanned and emailed any important letters (mostly bills to be paid from afar). Without that kind of help our trip would have gone far less smoothly. 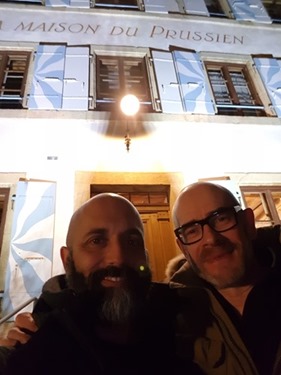 At some point during the last 20 years, the restaurant at la Maison du Prussien went through a major upgrade: we ended up eating a 5-course gastronomic delight. A fitting way to celebrate 20 years of friendship and commemorate the journey Autodesk has had with the Neuchatel office. We’re both lucky to have been given the chance to work from such a great Autodesk office over the last couple of decades (and thankfully will both have the option to work from home, once it closes, even as many cherished friends and colleagues will be leaving the company). 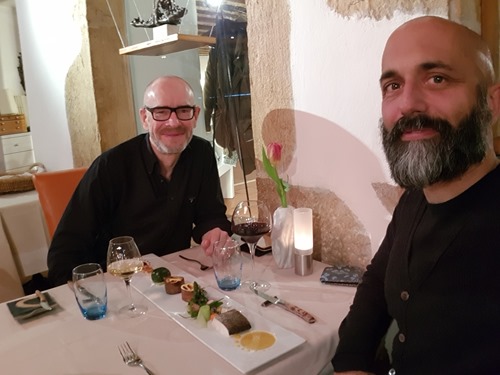 Thank you for everything, John. Here’s to the next 20 years!