It’s been a busy couple of months since getting back from our big trip (which, while incredible at many levels, was in itself not really a relaxing experience, all things considered). So in some ways it feels like a good time to take a break, especially as the kids have the week off school.

We took the chance to head up to the Bernese Oberland for a bit of skiing and snowboarding, as we often do at this time of year. I’m working a bit in the mornings and the evenings – I have a few important projects to work on, at the moment, and so don’t really want to take the full week off – and we’re hitting the slopes in-between. It has been bitterly cold for the first part of the week – largely thanks to the Beast from the East – so we’ve only ended up managing to ski for a couple of hours a day. It’s still lots of fun, though, and always very nice to come home afterwards.

Anyway – as the projects I’m working on are still under wraps, here are a couple of photos. The first was taken yesterday morning at daybreak – it was a lovely sight to see the sun casting the shadow of the mountains on the sky. 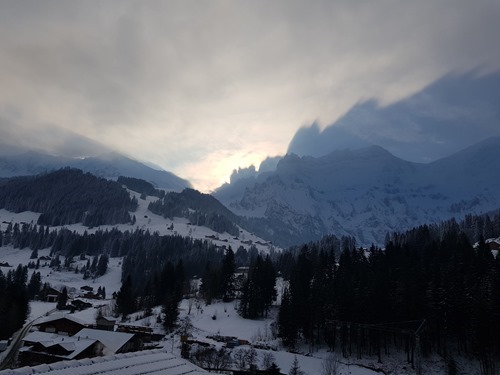 And here’s a quick animation of a Swiss flag blowing in the wind.

This is starting to feel like the calm before the storm, as the next few months are going to be quite busy, travel-wise. I’ll try to post something in the next few days about what’s coming down the pike.