Hackrod is open to the crowd

I was really excited to hear, over the weekend, that our friends at Hackrod have launched a successful crowd-funding campaign and that there’s still time to participate. The campaign is being hosted on MicroVentures, which means investors should receive interest on their investment as well as equity in the project, assuming things work out. This admittedly seems a nicer model than getting a T-shirt or coffee mug saying you supported their Kickstarter. ;-)

I haven’t yet decided whether I’m personally going to get in on the action (so to speak) but I thought I’d post about it in case others are interested by the project (in fact I’m somewhat surprised I haven’t posted about it before). The campaign is not specifically around building cars, but around a “digital manufacturing platform” that will bring together VR, machine learning, generative design, additive manufacturing and IoT.

This project is about way more than launching a fancy new buzzword-compliant platform, though. There is a serious challenge facing our industry: how do we capture the knowledge humanity has acquired over recent decades of solving engineering challenges and make it accessible to future generations? How might our industry enable “3 kids in a dorm room” to start a car company?

The roots of Autodesk’s collaboration with Hackrod go back some years, to something known as Project Primordial. Here’s a video that starts with Mickey McManus talking about the project. I love that the name comes from the idea that we have this primordial soup of technologies just waiting for a spark to create something new.

When I started digging into the videos that were created during Project Primordial, I watched a number of fascinating interviews with hotrodders in the US. If you have the time, do watch these for further background. If you don’t have time, please don’t start, as you’ll no doubt end up watching them all, just as I did. ;-)

It’s clear that our generative design technology – this time in the form of Project Dreamcatcher – was a key part of this effort.

It was fantastic that Mouse and Felix came to talk about Hackrod at AU2016:

During the session, Felix described the process taken with Hackrod. Firstly, they attached sensors to the chassis of an existing car, then drove it hard – basically to destruction – in the Mojave desert. The data captured via these sensors was then fed into the generative design process to come up with the next iteration of the chassis design. This resulted an a chassis that was designed generatively but built using conventional manufacturing techniques. Which had sensors attached and was taken for a drive… rinse and repeat.

Looking back at my old photos from the event, I found this shot I took in the AU exhibit hall as things were being set up. 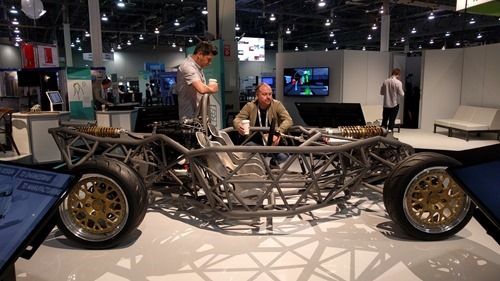 The next phase of the project is apparently to use advanced additive manufacturing to “print” a version of the chassis. One important step towards freeing the manufacturing process from the skills possessed by too few master craftsmen.

Also, the closed-loop, data-driven design approach is extremely interesting to me; the idea that product usage can be measured and used to drive the next iteration of the design. Or even to optimise the use of an existing product, just as Dasher 360 can be used to understand building performance and drive changes to the configuration and usage of a building.

All in all there’s a lot to think about here. I agree with the hypotheses behind both Project Primordial and Hackrod: that we’re on the cusp of a technological convergence that has the potential to radically disrupt the way things are made, today. And that over the coming years we’re going to continue to lose valuable skills as the people who possess them retire or stop working for other reasons. Hackrod may or may not end up providing a complete path forward, but they’re definitely heading in an interesting direction.