The world seen through social media (or not)

Something has been nagging at me, since returning from our world trip. Perhaps it’s best described as the impact social media is having on travel. Interestingly it’s been talked about very recently in The Guardian in an opinion piece entitled “Instagrammers are sucking the life and soul out of travel”. While we didn’t necessarily plan our trip to be able to take iconic pictures, having our own Instagram feed (which we’ve made private now that the trip is over, although I’ll accept connections if it’s obvious you’re a reader of this blog) meant that we weren’t completely immune from its effects. Plus there’s this blog, of course, although I’ve tended to share more pictures and commentary here… which I hope dillutes the effect somewhat.

On the one hand this feeling is that the pictures we’ve taken – and even the descriptions we’ve given – can’t really do justice to the experiences we’ve had. I don’t mean this in an arrogant  “you had to be there” way… I just worry that publishing a smattering of gorgeous pictures encourages people to think of the world in an overly simplistic way. But, worse than that, it’s that social media actually encourages travellers to behave differently, squandering an amazing opportunity to learn about the world. We saw it in so many places: between busloads of tourists in Yellowstone rushing to take iconic snapshots in front of Old Faithful and the Grand Prismatic… 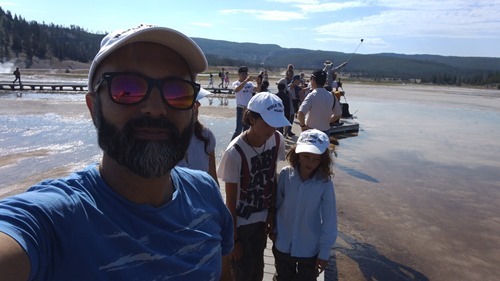 … to people on top of Cape Town’s Table Mountain striking poses that are clearly destined for Instagram or Facebook. 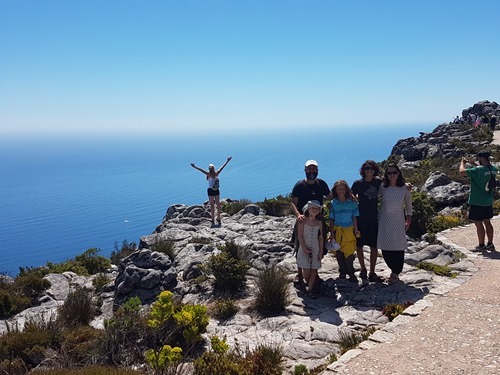 (This one was particularly annoying… someone had kindly offered to take a picture of our family, but in the meantime a couple decided they needed to walk just behind us and take their own series of photos with Instagram-friendly poses. The guy taking our picture didn’t really care, of course, so that’s what we ended up with. Anyway – at least it was nicely illustrative for this blog post. :-)

The phenomenon is put very nicely in the article mentioned above:

The moment social media becomes a primary driver in the planning or execution of experiences – travel or otherwise – we’re lost. It needs to be a tool to more effectively communicate the experience of travel to others, to help them see beyond the pretty – or occasionally distressing – pictures. But we’re not there, yet.

Today I came across this TED Talk by Anna Rosling Rönnlund about her efforts to more effectively communicate the differences and similarities we have with our fellow humans via the Dollar Street project:

Dollar Street is a project by Gapminder, the institute founded by Anna, her husband Ola and one of my favourite ever TED speakers (and Anna’s father-in-law) the late Hans Rosling. They do really important work to help communicate a view of the world based on facts. Something that is more important than ever, now that we’re firmly in the post-truth era.

I’m happy that Gapminder is continuing its efforts to educate us all about the world via tools such as Dollar Street. One day I hope we’ll all have better tools to communicate experiences to one another without dumbing things down to easily digestible, two-dimensional chunks. People need to see the horror of plastic along the beaches of Chile, South Africa and (yes, even) Tahiti. And how climate change is causing crops to fail in Bolivia and cities such as Cape Town to suffer multi-year droughts. These topics aren’t generally sexy enough for Instagram or Facebook, yet there’s nothing more important to communicate to our children.