Having left Lesotho, we had two main items in our calendar for the rest of the year: we had two nights booked in Addo Elephant Park from December 17-19 and then a family gathering in Knysna starting from December 21, give-or-take (my wife is half South African, so we’re making the most of this leg to enjoy a family Christmas).

We left Lesotho on December 14, so had a few days to kill before needing to be in Addo. We had a couple of options: head southeast to the Wild Coast or southwest to the Karoo. As we expected to be having quite a bit of coast (and beach) time along the Garden Route, we opted for desert and headed towards the Karoo.

Our first stop was completely arbitrary, in Aliwal North. We found a B&B that had a couple of camping spots and so cracked open the tents for the first time since California. This felt strange but good: I was just happy we hadn’t been carrying them around the world for 5 months for no reason (it would certainly have made life easier to ship it all home, if that had been the case).

Interestingly there was a brand new restaurant – an American-style diner – opening right next door. It was quite something to see people sitting out on the deck of this diner, speaking Afrikaans. 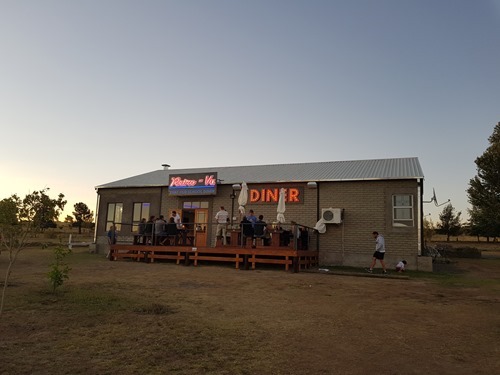 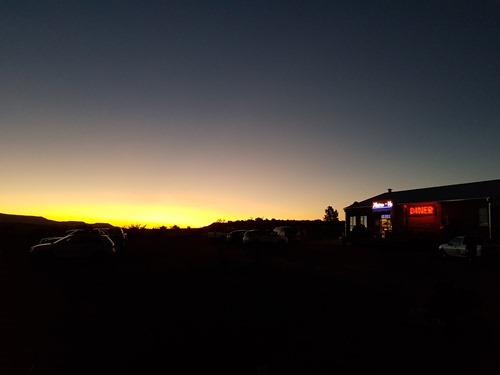 The next day we headed on towards the Karoo. Given the need to be back in Addo, we opted to visit Camdeboo – a national park that’s on the eastern edge of the Karoo. We went there first, finding that it’s campsite was fully booked – predictably enough, it being the first weekend of the South African school holidays – so we headed on into Graaff-Reinet and went to the Urquhart Campground there. This was basically empty, somewhat surprisingly, so we found a nice spot and set up camp. 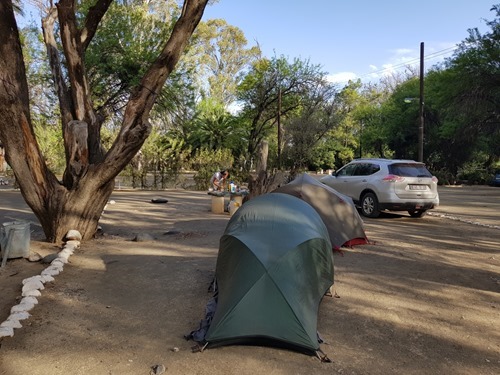 The next day we visited Camdeboo. We started with the western side of the park, which was much more about the views than the wildlife. Firstly we headed to the Toposcope viewpoint, which afforded a pretty nice view across Graaf-Reinet and the park itself.

The big ticket item was really the Valley of Desolation, though. This was simply stunning.

From here we headed back across to the eastern side of Camdeboo, which was more about the animals. We spent a few hours criss-crossing the park – the kids’ first safari, if you can call it that – and enjoyed it immensely. 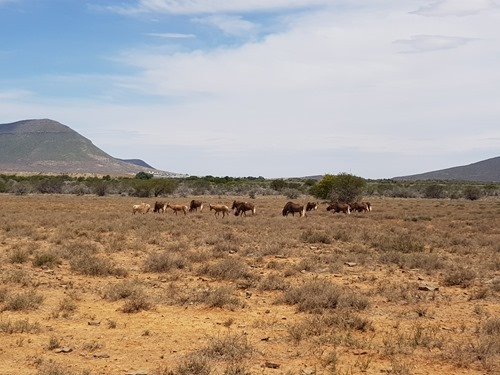 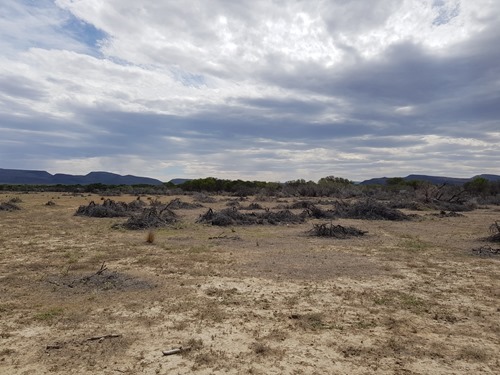 Having skipped lunch we went back to the campsite for an early dinner. It was fun to see a local wedding taking place next-door… 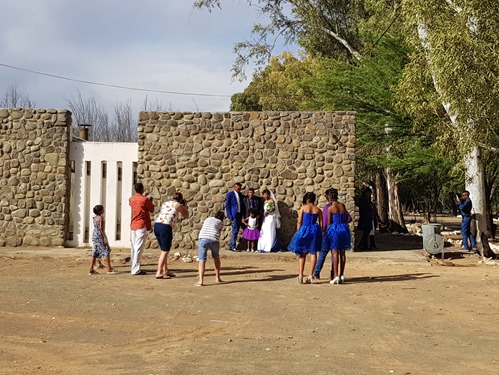 After dinner we went back into the park to see the animals – mostly boks and wildebeest – by sunset. 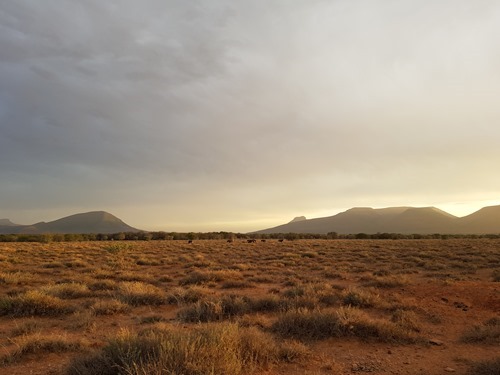 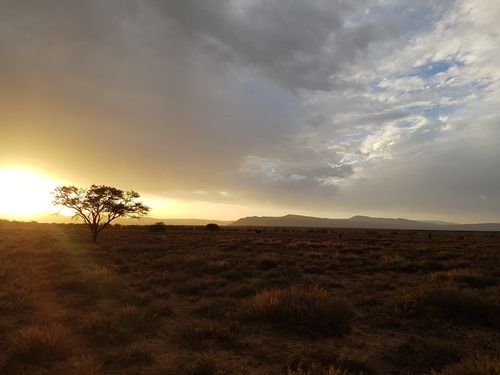 We knew this was really just a warm-up for Addo – which we expected to be much more impressive, safari-wise – but it was still a fantastic experience.

The next morning we woke up and got ready to head off. The campground had a local population of vervet monkeys, so it was very important not to leave food lying around. Here’s a quick panorama that was mis-stitched by Google Photos… it’s a nice image, nonetheless.

After leaving Graaff-Reinet on the 17th, it was time to head to Addo. We chose to stop in Kirkwood for a quick break: initially to use the toilets but in the end we took a tour of the Daniell Cheetah Project breeding centre.

While we were initially a little suspicious of the centre’s motives – at times it felt a bit like a zoo, given the fact it clearly animals contained animals who were not part of conservation efforts – we ended up being fairly convinced it was part of a serious attempt to maintain (and broaden) the cheetah species’ genetic diversity. 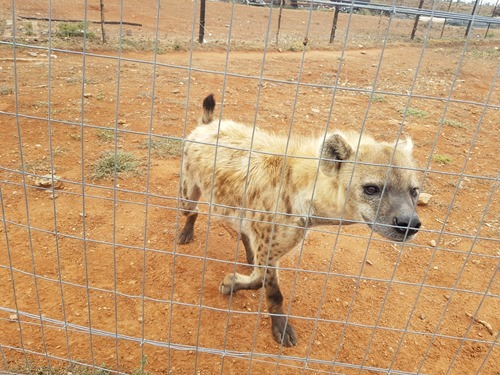 I had the chance to meet – up close and personal – a cheetah who had been bred in captivity and was clearly very comfortable around humans.

After a brief introduction by the tourguide, the cheetah – named Khaki – proceeded to lick my forearm for a good minute or two. It had a really rough tongue and gave a deep purr throughout. A somewhat surreal – but completely brilliant – experience. 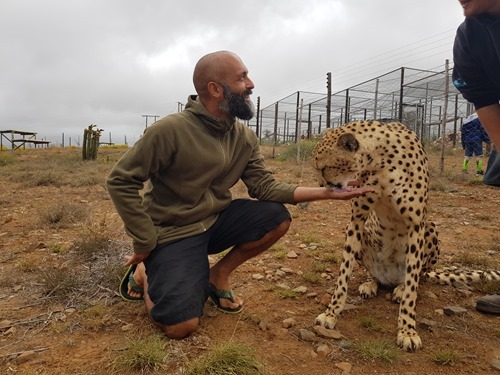 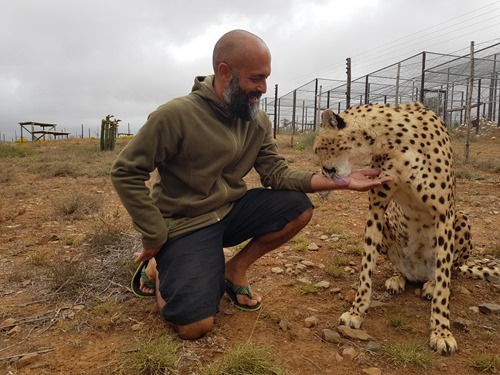 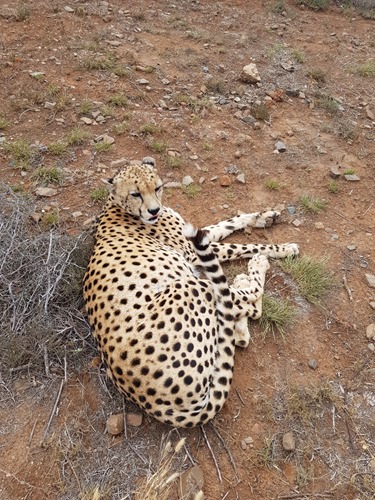 From here it was on to Addo, which we’ll talk about in the next post.