Being back in Bangalore brings back floods of memories. My wife and I lived here when we had our first baby. This wasn’t part of our plan, particularly: we found out we were expecting during the first week we moved here, back in late 2003. That was a challenging time for us: workwise I was building a new team in Bangalore for Autodesk’s consulting division, while Celia was dealing with all the issues related to a first pregnancy in a foreign country. Not to mention my father being diagnosed with terminal cancer, back in the UK. Our two years in Bangalore were an intense – but in some ways very rewarding – time for us. Given the circumstances, my wife had a very different experience than I did, and so was understandably apprehensive about coming back here with our children. 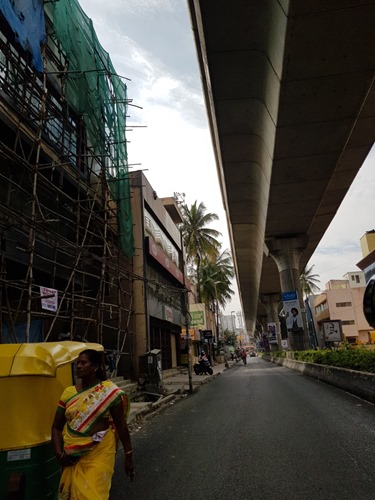 Life in Bangalore is in many ways much the same, and in others very different, 14 years later. On the one hand the traffic has impressively managed to get worse – despite the opening of the Metro – but technology is making getting around much simpler: Uber – and its Indian competitor, Ola – make getting from A to B much more straightforward. I used to have crazy arguments with autorickshaw drivers who tried to overcharge. The other thing that was excessively complicated was procuring goods and services: these days you can use Apps to buy pretty much anything you want without even leaving your home (which would have been a blessing, back then, but probably means we would very rarely have done so).

The digitalization of India has been accelerated by its demonetization – at least that’s one of the arguments used by the political encumbants for making it happen. Last year’s demonetization meant that overnight 500 and 1,000 ruppee notes were no longer usable. People had a limited time to go and exchange these old notes for new ones – in the process declaring the money, turning it from “black” to “white” – but many people could not do so, for various reasons. One horrific example relates to women in rural areas, often with abusive, alcoholic husbands. For the sake of their families they often squirrel away cash to stop it from being poured down their husbands’ throats. Over time this cash accumulates, of course, but never goes anywhere near a bank account. When demonetization hit, these women – and therefore their families – were penalized: there was often nowhere locally they could exchange the bills, and they couldn’t engage the help of their husbands without making them aware of the cash reserve. Utterly tragic.

Many millions of dollars were sucked out of the economy during this period, and it largely hit the poorest people hardest, as they’re often paid in cash. We saw it while up in Kodaikanal: the businesses there (and presumably down in Bangalore, too) have taken a massive hit as all this liquidity has basically evaporated.

Our time in Bangalore – which we’re spending with my Mum and sister, who have a place here and managed to be with us, both here and in Kodaikanal – was spent mostly visiting the city. On the first day we spent the afternoon (after I’d come back from the office, with my head spinning with the news of the Neuchatel office closure) at the Bangalore Club. My parents joined this club back in the 1960s – when it was possible to do so without joining a 25-year waiting-list (I kid you not) – and it’s really a nice (if a little snobby) little oasis bang in the centre of Bangalore. 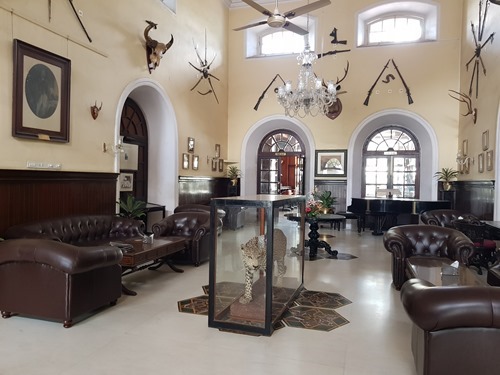 Wandering around Bangalore you still get to see the odd crumbling bungalow. Back in the day (as recently as the 1970s) these were the predominant form of accommodation in Bangalore: 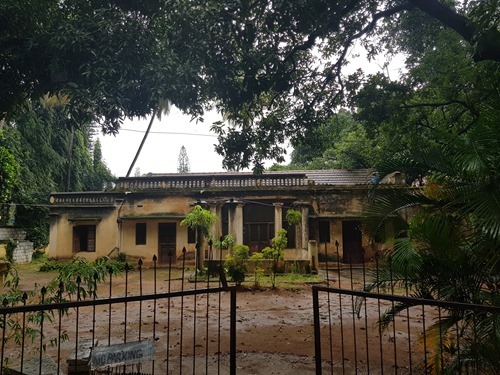 Bangalore was always the garden city of India. There are far fewer trees than there once were, but some neighbourhoods still have some beauties, thankfully: 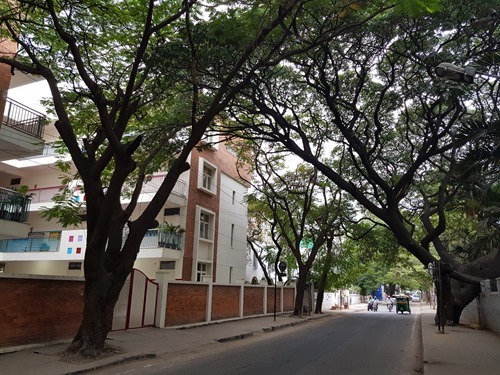 As always, in South India, we ate some really great food. I was weaned on Mangalorean food, so loved the food at Mangalore Pearl: 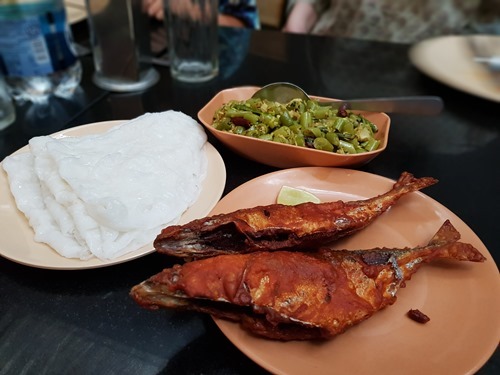 We also ate at Bheemas on Church Street – an old favourite haunt of ours: 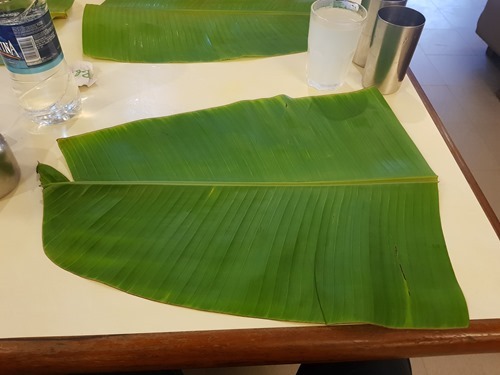 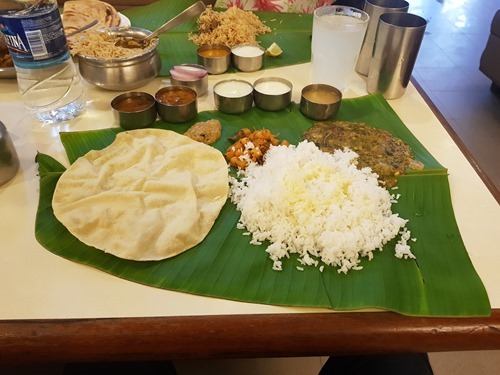 For a taste of old Bangalore, Koshy’s is a great place to grab a cup of tea: 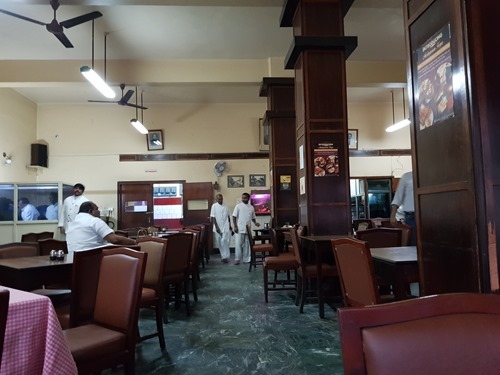 Despite using UberXL for most of our journeys, the kids loved jumping into autorickshaws from time to time: 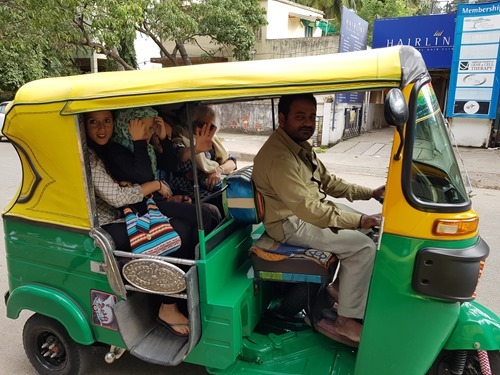 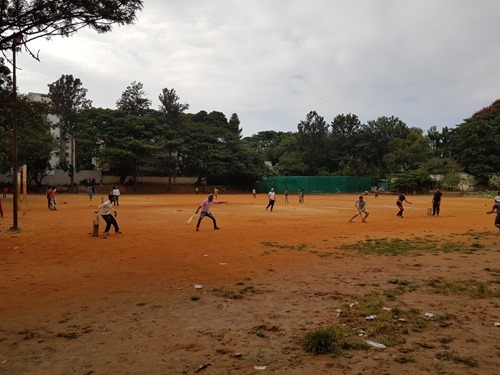 Here’s the sugarcane juice merchant serving the needs of the thirsty players: 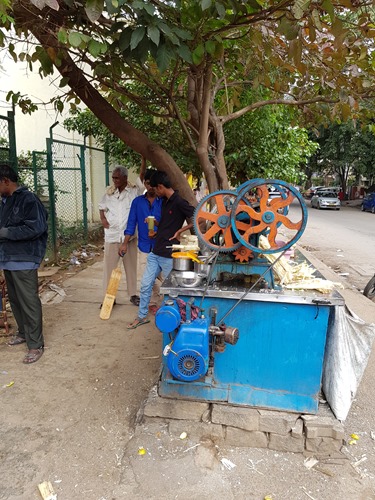 Then there were the cows. Cows wandering the streets… 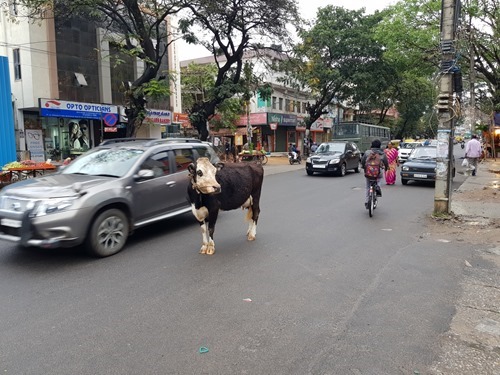 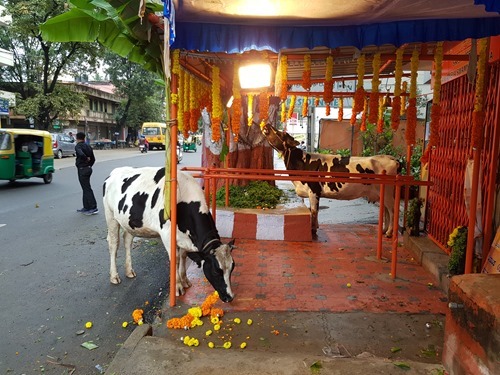 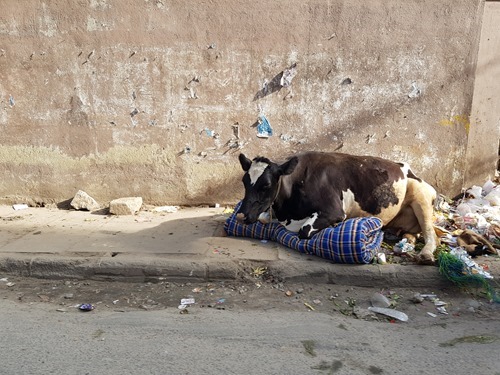 Over the weekend we decided to visit Comic-Con India. My kids were thrilled, and the grown-ups all found it an interesting experience, too. 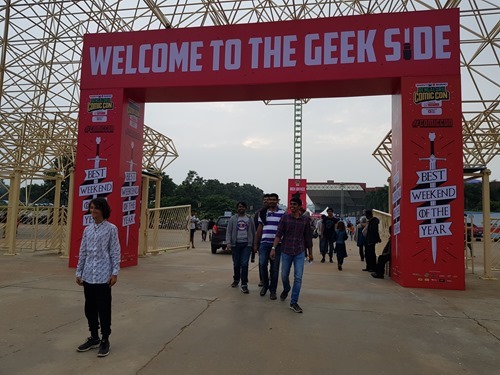 Our daughter is obsessed by Spiderman, so she loved meeting him in person. Soon after this picture was taken, she picked up her own black Spiderman mask so she could participate in the cosplay. 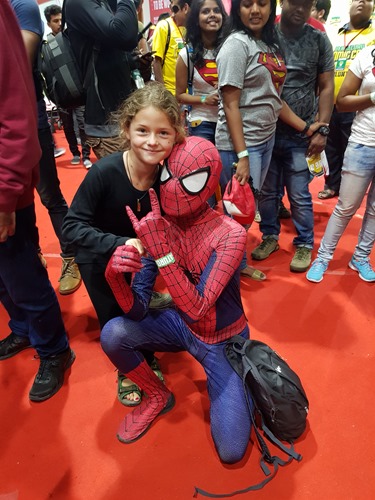 There were lots of opportunities for pictures with various characters: 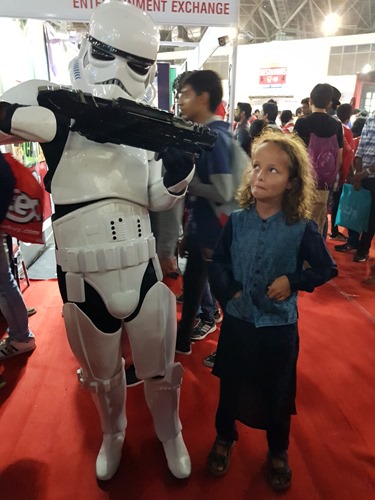 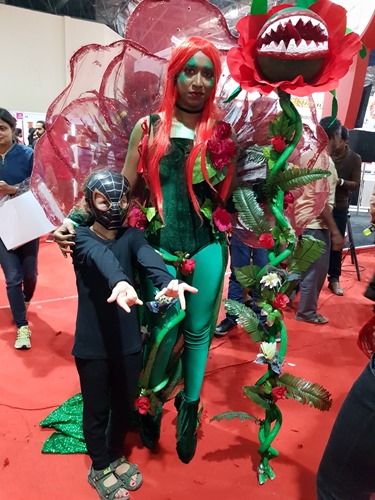 This particular costume was absolutely incredible: 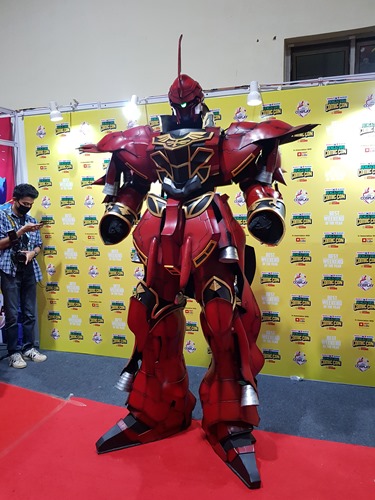 My overall favourite was “cut in half Harry Potter”, though. This guy was hilarious. 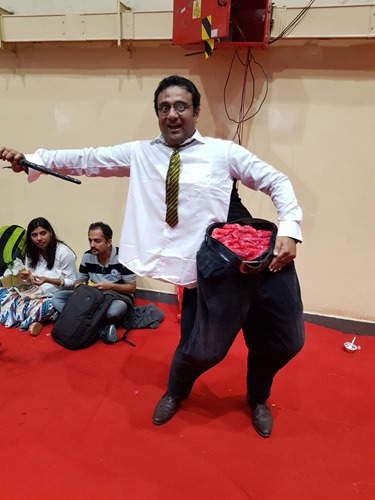 Anokhi also enjoyed people wanting their pictures taken with her, of course. 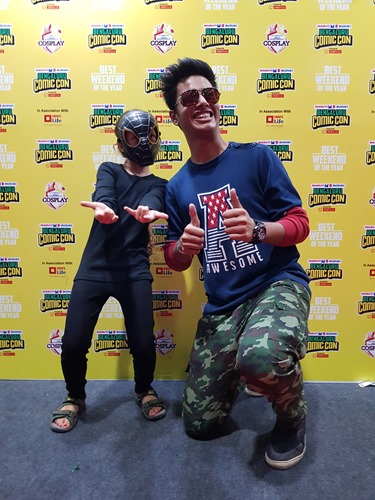 All in all Comic-Con India was a lot of fun. Apparently they have them elsewhere on the sub-continent, but I have to believe Bangalore is the perfect location for the event. There were so many twentysomething IT professionals geeking out, which was a sight in itself! 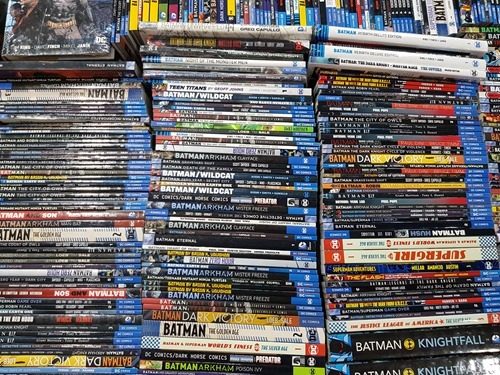 Today we visited the Someshwara Temple, for the kids to experience something a little more cultural. I know very little about Hinduism, sadly, so I can’t add any useful commentary on the below photos: 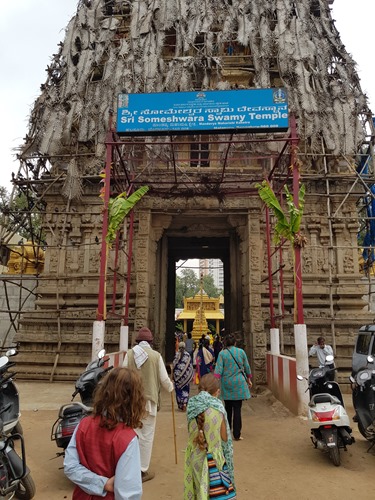 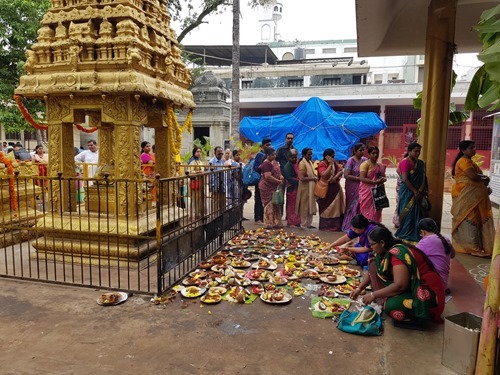 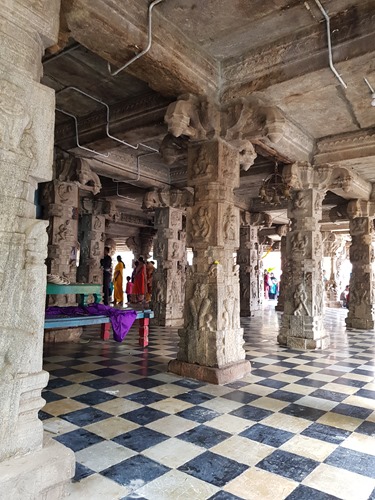 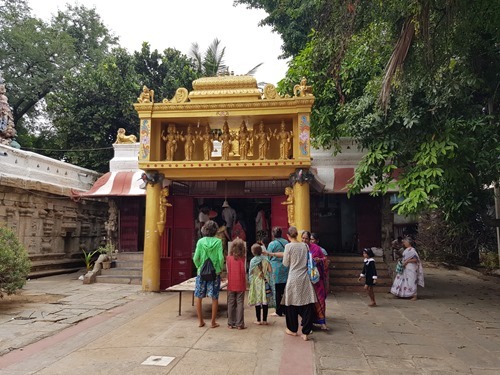 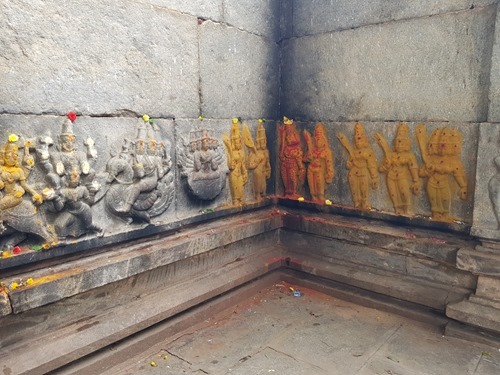 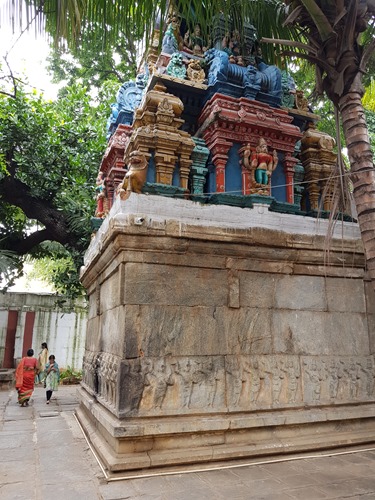 Tomorrow is our last day in India on this trip. We have plenty of time to pack our bags, as the flight out is actually at 3:40am on Wednesday (a lot of the long-haul flights out of Bangalore leave at such crazy times). It’s going to be a slog to get to Durban – we change in Doha and then Johannesburg – but then we’ll have a full month in South Africa to recover.