After a fantastic weekend catching up with The Joneses (Sean, Sharon & their kids) in Auckland, we headed out on our own in the motorhome. We drove south to Waitomo, with the aim of visiting its famous glowworm caves. (We’d seen them featured in the first series of the BBC’s excellent Planet Earth.)

It took a touch over 2.5 hours to get there, so we stopped for lunch at a petrol station on the way (ah, life on the open road). On arriving at the caves, we found a few different options for tours. As it was already 3pm, we had thought we’d only have time for the glowworm cave tour but were told that if we wanted to we could tour the Aranui Cave at 3:30pm and then get on the last glowworm cave tour at 5pm.

We ended up being really happy we were took the option to see the Aranui Cave, too: it’s apparently the least popular of the 3 cave systems you can visit in Waitomo, but it’s in many ways the most stunning. Here are some photos: 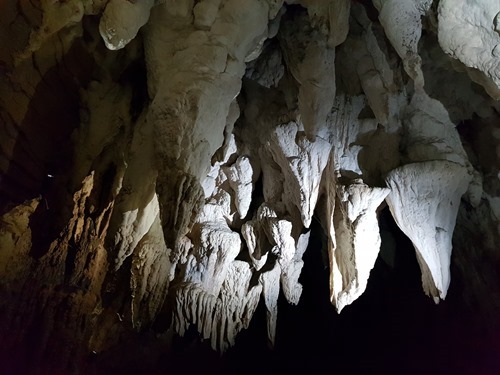 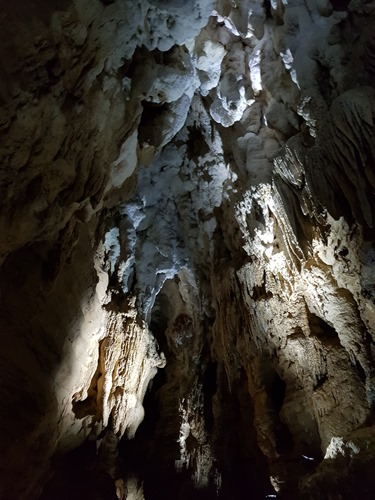 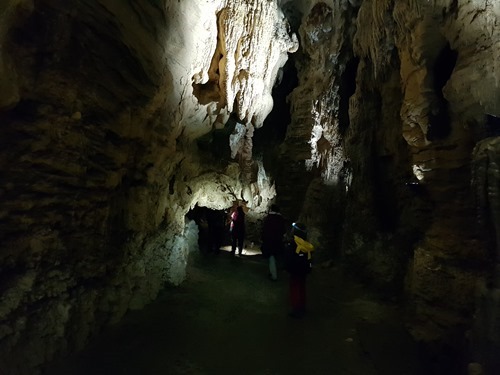 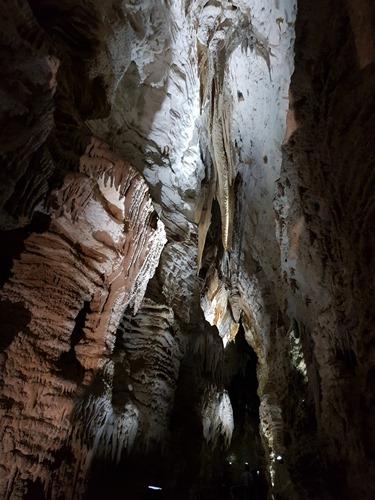 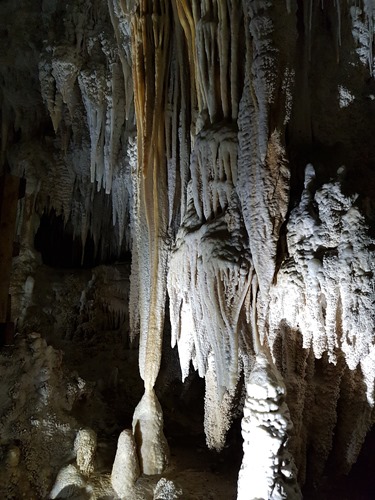 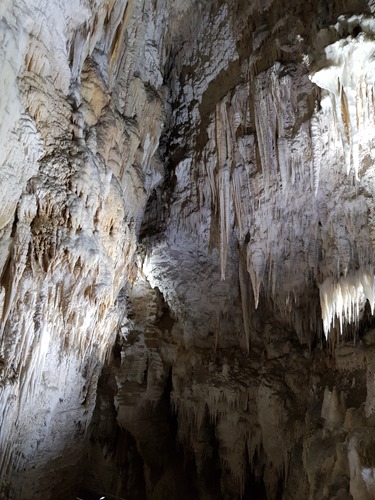 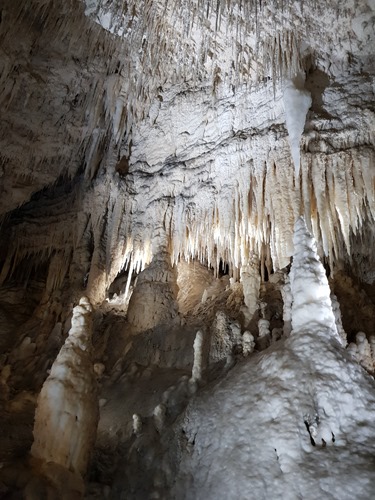 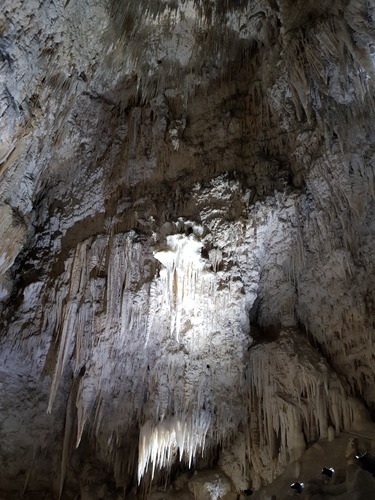 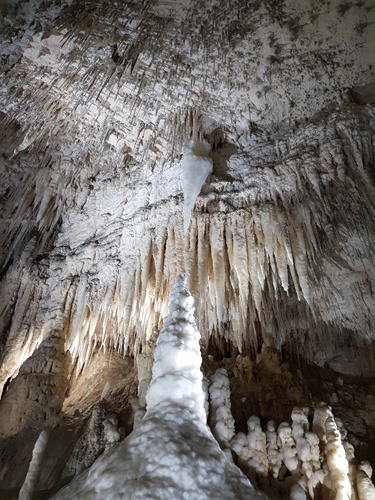 After the splendour of the Aranui Cave, we headed back across to the glowworm cave. We weren’t allowed to take pictures on this particular tour – another reason we were happy to have visited the Aranui Cave first, if nothing else to have some content for this blog post – so here’s a shot of the boat leaving the caves by the river that runs into it. 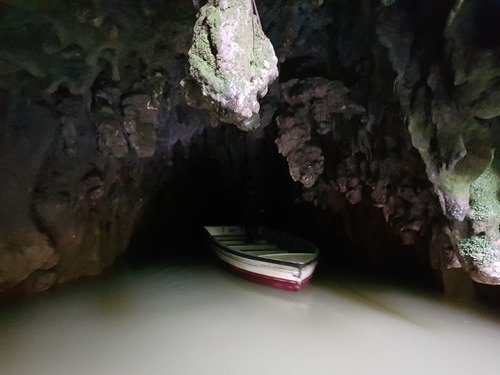 It’s this river that means glowworms populate the caves: they’re there to feed (as worms) and breed (as adults). The glowworms are the larval stage of the insect, and sit on the roof of the cave, feeding on insects that come in via the river. The worms spin strands of sticky thread and then attempt to attract flies by glowing. Yes, while fireflies use light to attract mates, glowworms do it all for food.

Eventually the glowworm spins a cocoon and becomes a pupa. On hatching, the mouthless adult gnat has one function to complete before it starves: to reproduce. And then potentially to act as food for other glowworms, but that’s another story.

The tour itself was both fascinating and beautiful: the grand finale was to hop onto the above boat – which was pulled through the water by the guide via a network of ropes draped across the caves – and to travel along the river, looking up to see the glowworms on the roof of the cave. It was like watching the Milky Way on a clear night: just incredible.

We had a few options for parking our motorhome in Waitomo, and went with a cheap one: the very handy app, CamperMate, pointed us to Woodlyn Park, which allows self-contained motorhomes to park for just $10 NZD. The grounds are pretty neat: there are motel rooms inside an old plane, an old boat and even a few hobbit holes! 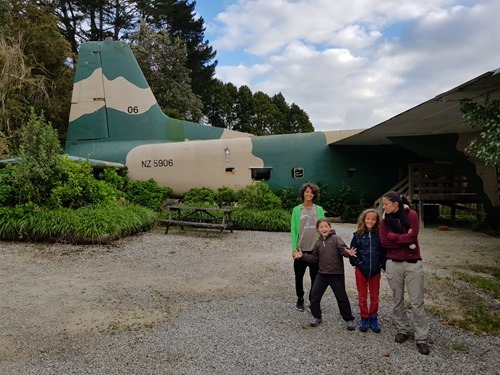 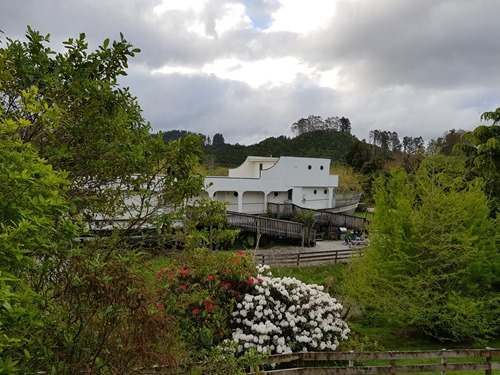 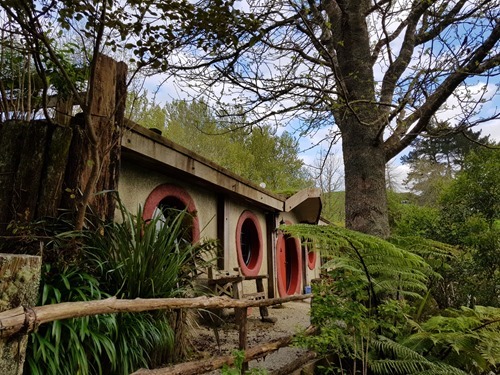 As the next day we’d planned to visit Hobbiton in Matamata, this was a nice little warm-up before the main event.

Someone in the Woodlyn Park office pointed us at a couple of local attractions – a waterfall and a natural bridge – so we chose to head over and see them. It was probably a little late to do so, but we still enjoyed seeing both, however briefly. 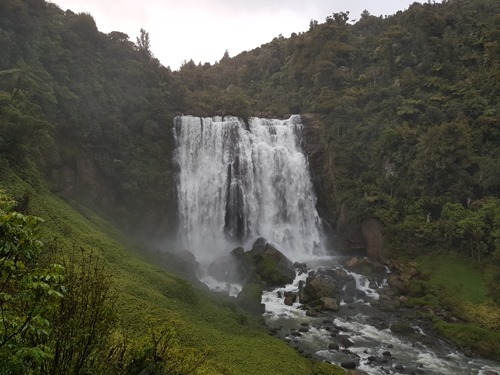 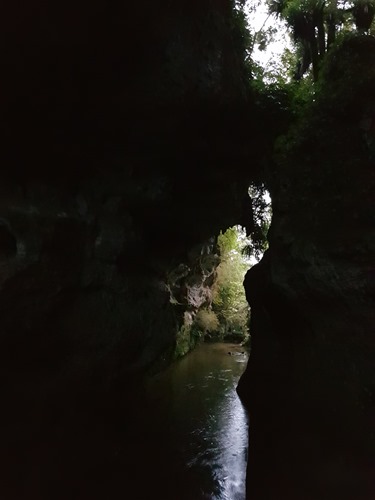 The following day – on Tuesday morning – we headed to Hobbiton. Which we’ll talk about next time.