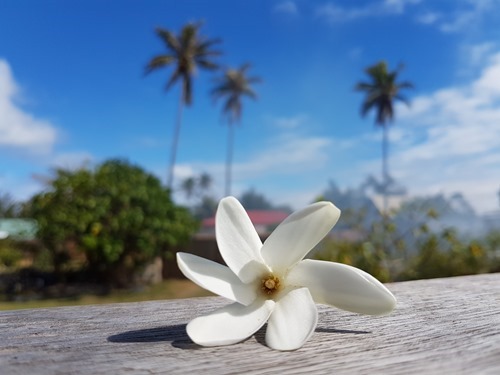 After a slightly crazy week spent exploring the intricacies of the medical system in French Polynesia, we finally managed to relax and kick back for the weekend.

On Saturday – after Anokhi was discharged from hospital, albeit with a minor, post-operative fever – we were taken on a drive around the island of Tahiti by our hosts. The weather wasn’t particularly good by Polynesian standards (it was just fine by Swiss standards ;-) but we still got the chance to see a fair amount of the island.

We stopped for lunch at a popular surf spot, which also had black sand beaches. 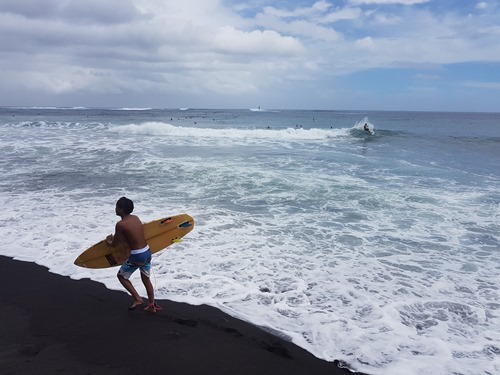 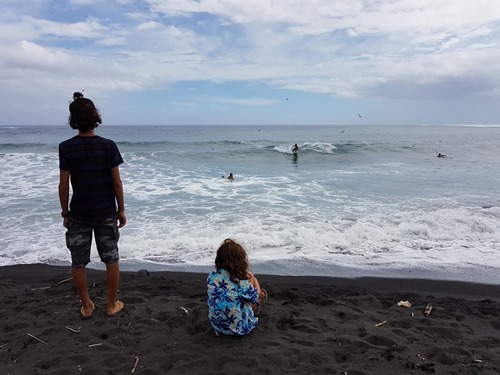 From there we headed on south-east onto the smaller part of the island – known as Tahiti Iti or Tai'arapū – where we drove up towards Belvedere for a view out across the larger part (Tahiti Nui). 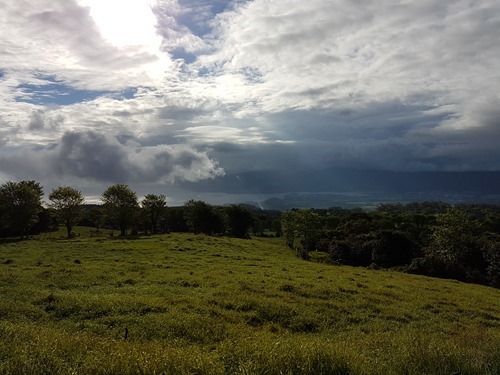 Coming up here got us out from the bank of cloud over the main part of the island, which was nice.

We had hoped to use our remaining time to get across to one of the atolls in French Polynesia – ideally Fakarava or Rangiroa, as they apparently have spectacular diving – but in the end we opted to take the 45-minute ferry across to Mo’orea, instead. (Anokhi still had a slight fever and we didn’t want to risk getting stranded away from medical facilities.)

So it was that on Sunday we headed down to the port in Tahiti to take the ferry. 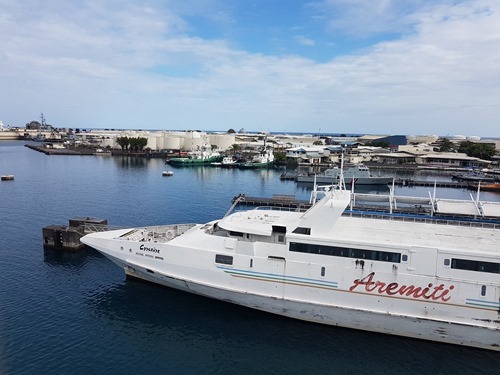 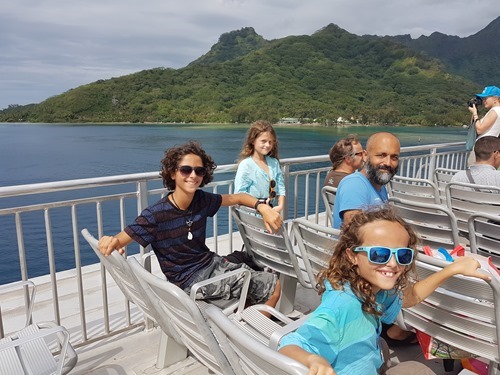 As everything had been so up in the air, we took our chances on the car rental front: we ended up having to take a 7-seater Dacia Lodgy, which was fine if a bit bigger than we needed. Our Airbnb was spectacular, though: we found out about it through Cyril, one of our hosts on Tahiti, who is good friends with the owner. It has a pool and an outdoor kitchen! 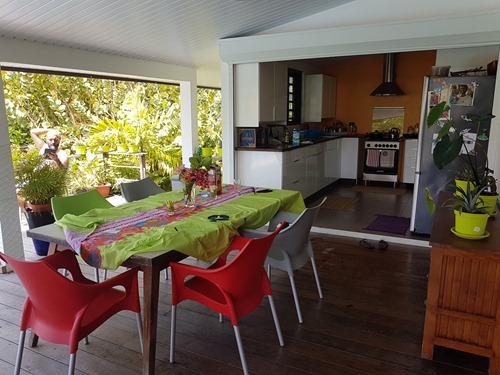 On Sunday I took it easy with the younger kids, getting settled in. My wife and eldest child (Kalan) headed out to try and book some diving: they headed around the island to the Intercontinental but had a bad experience trying to book anything (the dive center there was short-staffed due to illness, and the reception they received was just plain rude, so we’ve given up completely on them).

On Monday we headed out for adventure as a family: we started by booking diving with Moorea Blue Diving – my wife and I will each take a turn to dive with Kalan on Tuesday and Wednesday. From there we headed around the island, going inland to follow the “pineapple route”… 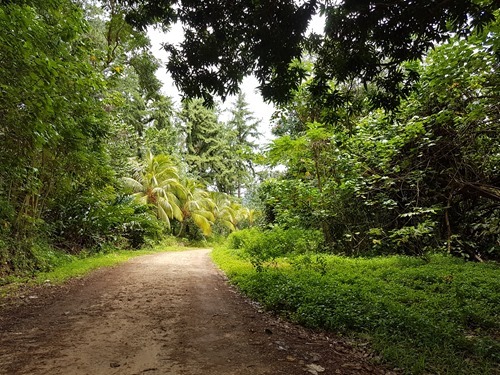 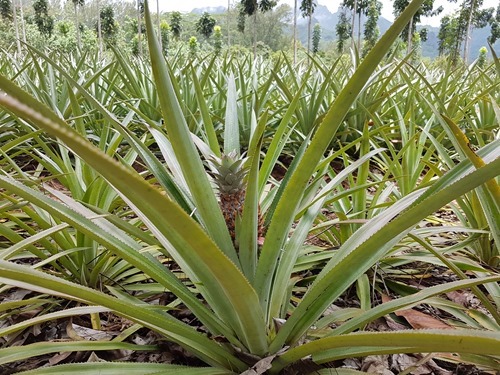 … and to climb Mo’orea’s own Belvedere: 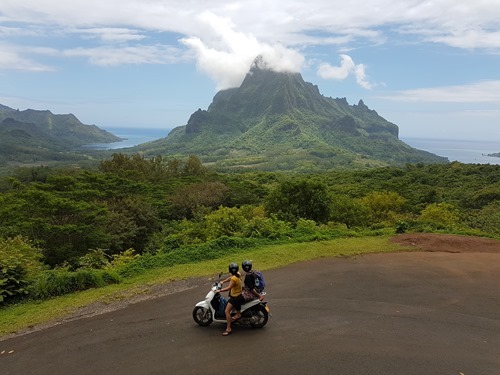 Then we headed around to Coco Beach, from where we rented a little motorboat to visit the “motus” – three little islands off the shore. (One is private and so was off-limits.) 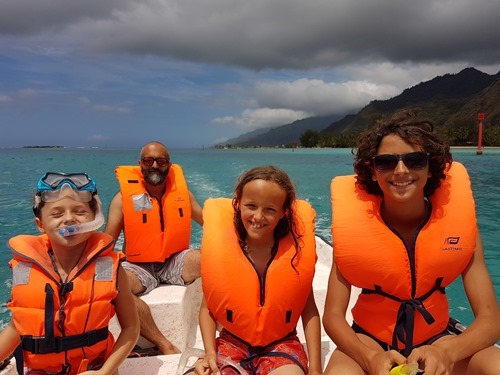 We stopped once to snorkel with rays – this was spectacular, in itself – and then worked our way back into the wind to moor once again.

At this second point – in just a metre and a half of water – we swam with rays, once again, but also with black-tip reef sharks: 5 of each at a time! (There may have been more – this was the most we saw at any particular moment.)

Kalan was over the moon: it’s his dream to become a marine biologist, so this was just heaven for him. 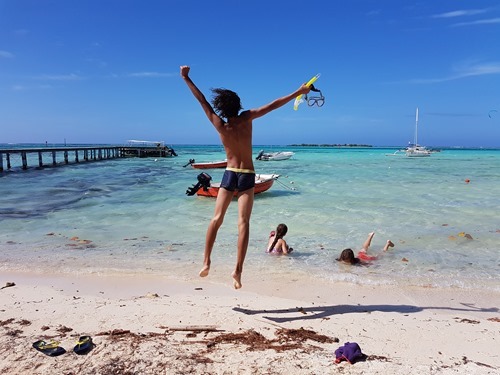 So our first day on Mo’orea went very well. We’re now looking forward to seeing what the diving has to offer!