We flew from Santiago as planned on Saturday morning at 9:30am, arriving at lunchtime (with a couple of hours saving thanks to the timezone change) on Easter Island. 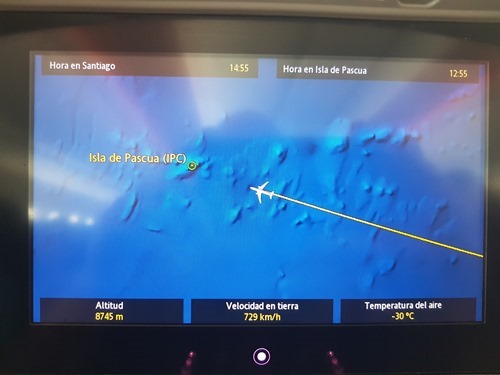 Along with Machu Picchu and Iguassu Falls, this was another destination for which we’d prearranged a tour with the travel agency from whom we bought our round-the-world tickets. Which was nice: it meant we had airport transfers, a hotel and a full-day tour of the island all organised. A welcome change after the logistics we constantly battled (through our own choice, admittedly) on the South American mainland.

Easter Island is our first stop in Polynesia – the others being Tahiti and New Zealand (I’m not sure if that’s strictly part of Polynesia, but it was certainly settled by the Polynesian people, of course) – and it’s interesting from a transitional perspective, in that – being part of Chile – it’s also part of South America, too. We certainly found it interesting to compare and contrast Easter Island to the rest of Chile, and to learn about the islanders’ sometimes complex relationship with the mainland.

After settling into our (very comfortable, by our standards) hotel, we were about to go and explore when our first medical emergency of the tour happened: our daughter, Anokhi, was eating peanuts while playing and one went down the wrong way. Luckily she coughed most of it up, but a small fragment (it turns out) got lodged in her airway below the oesophagus. Since Anokhi’s birth I’ve used the nickname of “peanut” for her – she seemed so very tiny when she was born – and the irony of this wasn’t lost on any of us. There’s some additional irony about having a medical emergency on an island that’s as remote as this one… here’s what Wikipedia has to say about this:

Great timing, you might say. We spent our first afternoon hanging around the emergency room while a junior doctor debated whether it made sense to go for a general anaesthetic (their only real option in this scenario, here, it seems) but in the end we opted to keep a close eye on her situation and come back in case anything changed for the worse. 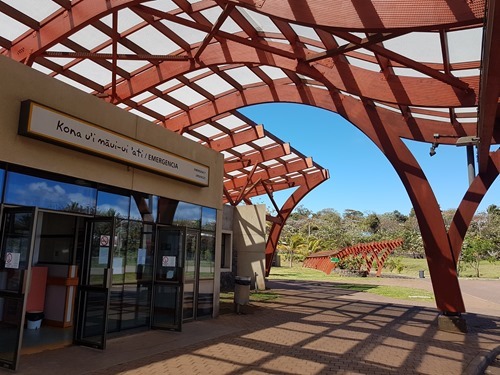 After this excitement we decided to wander into Hanga Roa, Easter Island’s one town. We were staying on the outskirts of the town, near the airport, and it was a quick walk down to the harbour. There are two moai there, one is restored to its original position – facing inwards, protecting the settlement – while the other is lying on its back. 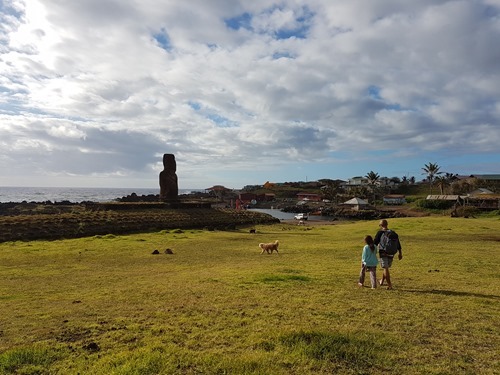 The view from the restaurant at the harbour was spectacular. We stayed for a sunset dinner. 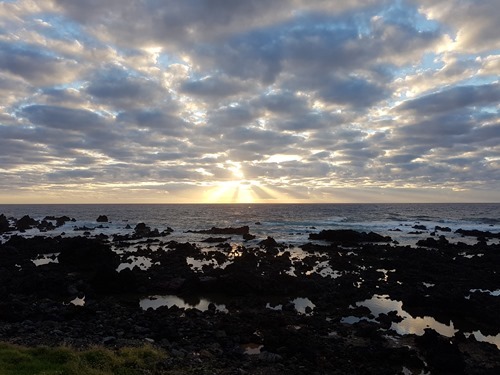 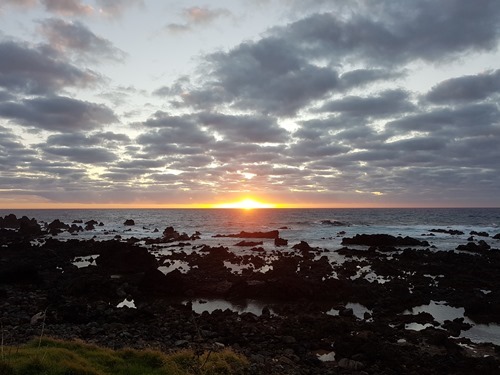 It was interesting to be served bottled rainwater! 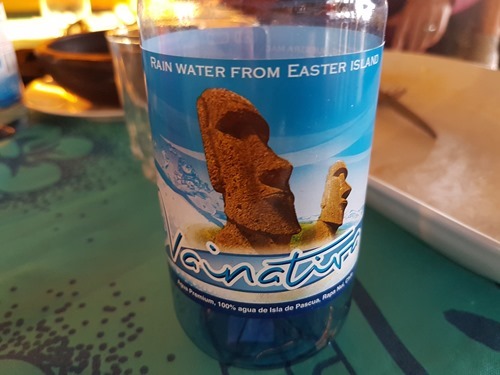 The next day we were up bright and early to start our tour. 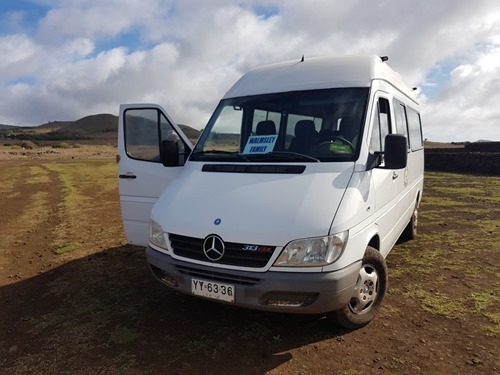 Our guide, Elisa, was German but married to a Rapa Nui (the term is apparently used not only for the island, but also the indigenous people and their language), which meant she was able to give insights that went far beyond what’s documented in academic research and guide books. We were really lucky to have her with us for the day.

The tour took us along the south coast of the island. Here are some snaps I took along the way.

At the quarry where moai were carved… 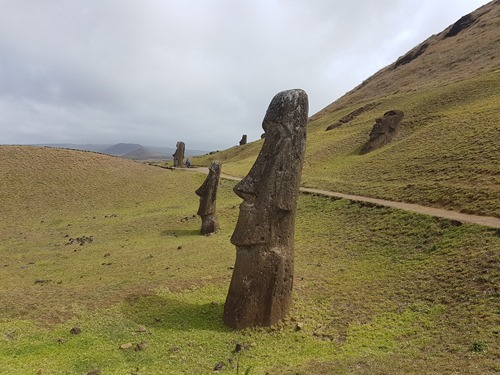 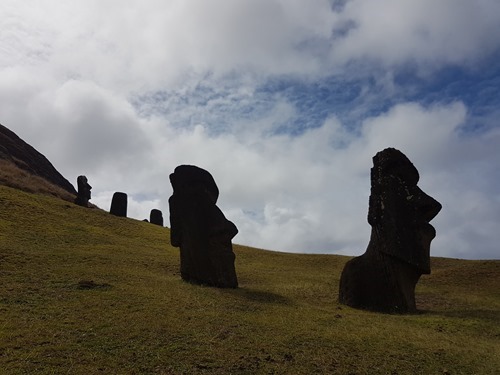 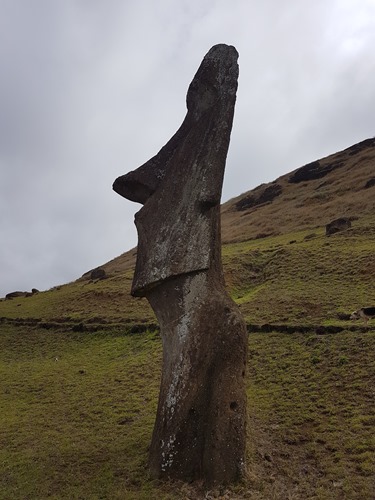 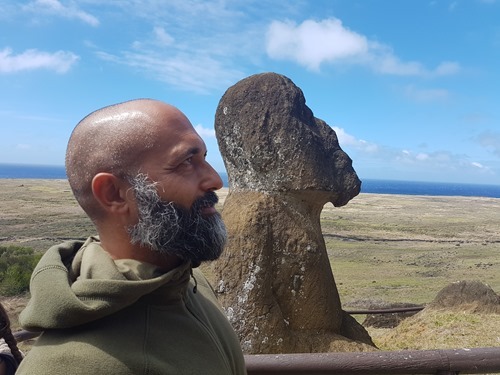 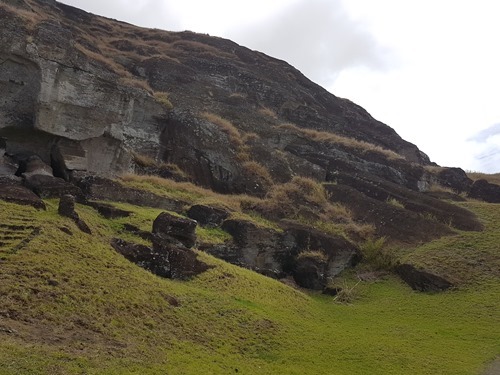 Here’s another shot of the largest moai ever attempted – this one would have been absolutely huge – although it was never erected. 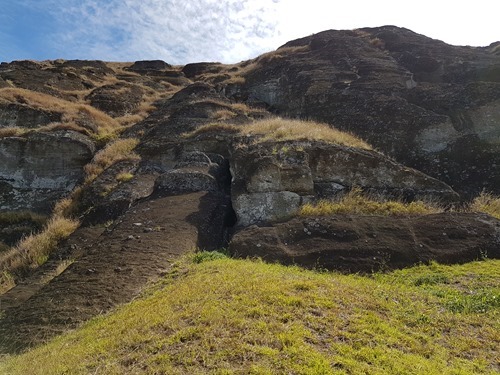 The platform at Ahu Tongariki. 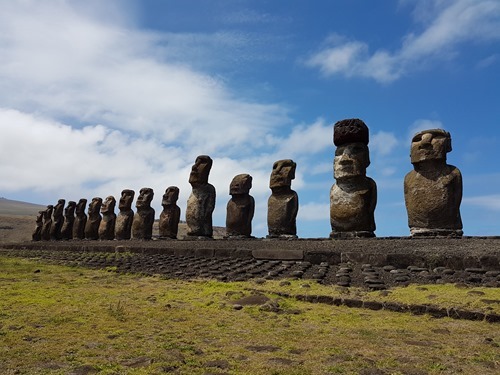 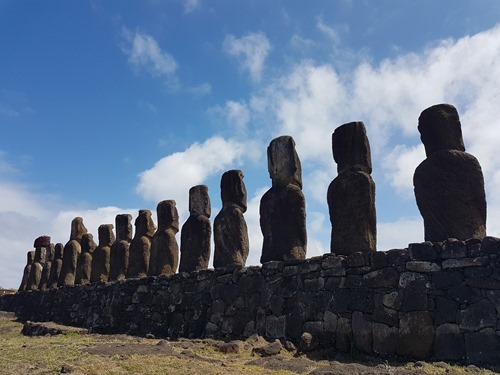 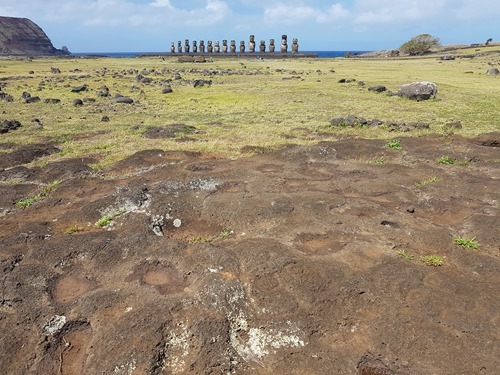 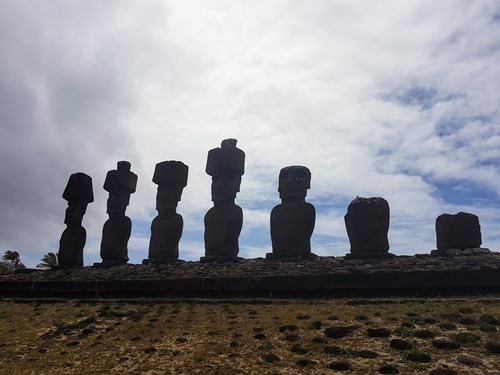 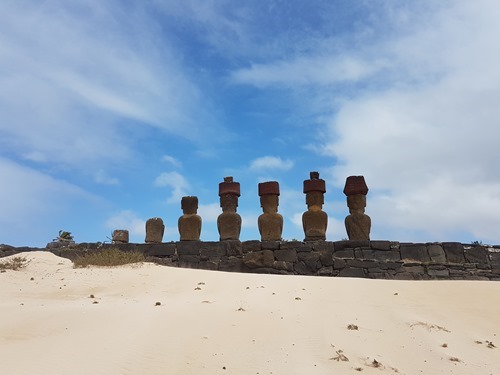 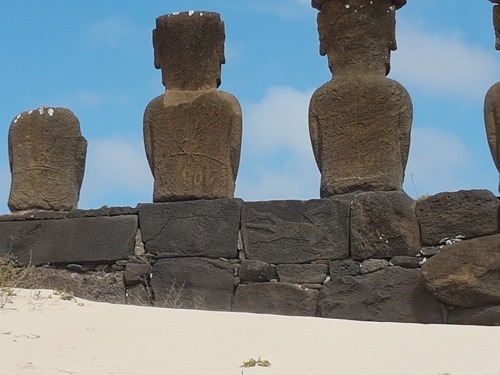 It was an amazing tour. One thing I will say: I always imagined Easter Island to be windswept, but the day of our tour was exceptionally so. There were times when we struggled to keep our feet on the ground. Which was in itself part of the experience, of course.

On our own for the last day, we hiked up to Orongo: an inactive volcano containing a unique ecosystem, as well as a restored historical settlement. 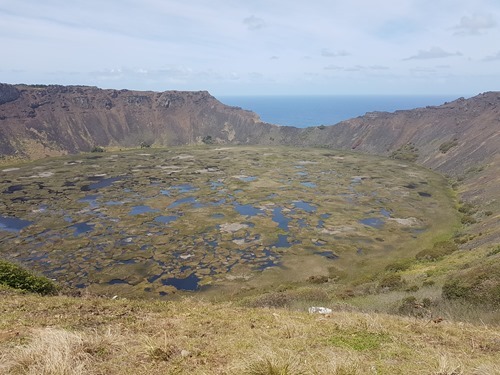 This was a great way to burn some energy before taking the next flight onwards to Tahiti. I’m so happy we decided to include it on our tour… it’s like a dream-come-true for all of us to see the moai with our own eyes. I really hope we’ll get the chance to come back, one day.